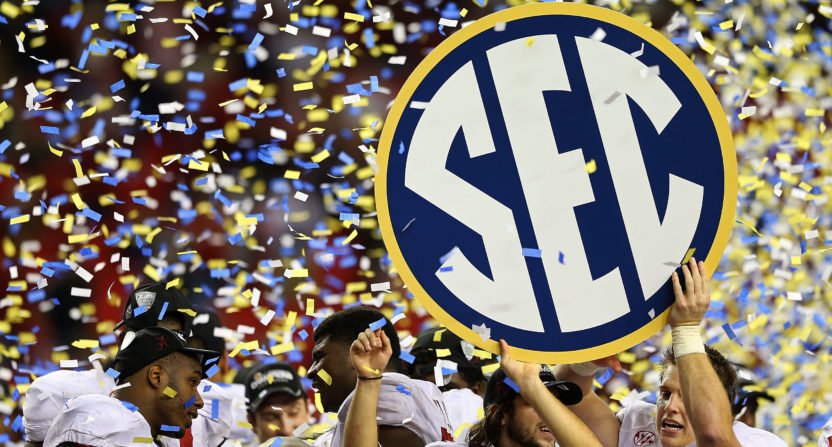 Every week leading up to the new college football season, our staff at The Comeback comes together to respond to one question facing the conference highlighted in our 2017 preview coverage. This week, we’re focused on the SEC.

The SEC had a good run as the nation’s top conference in college football for a good stretch during the BCS era, and there is little argument that holds water against that idea.

Today, the SEC is still in good standing for the long term, but are other conferences chipping away at the SEC? Alabama is still one of the top dominant powers in college football, but does the rest of the SEC hold up its weight to live up to that SEC pedigree that was bragged about for the better part of a decade not so long ago?

Bart Doan: Credit the editor for making it tough on me. I don’t know that I agree with the premise completely. Not to get too longform into ancient history, but the SEC left the BCS era with a losing record in the regular season to the Pac-12 and Big 12, break-even with the Big East in the regular season and the oft-maligned Big Ten in bowls, and held a losing record to the Big East in bowl games when the BCS era existed.

At least from my vantage point, conference strength is a year-to-year study, and the SEC won more of those years than any other conference, but it wasn’t this annual thing that has this airy nostalgia of iron-clad fact.

At any rate, we’ll probably need a few more years to dissect why college football appears more “even” across conferences than it used to be, but I’d wager it comes with the postseason format change. The SEC has won one of the three CFB Playoffs and has missed out on appearing in one final.

The theory, at least in my mind, was that if you expanded the playoffs past two teams in the BCS era, some of this stuff about conference dominance never would have even existed. The BCS was the perfect system for any conference that could gain the perception of strength because it was so exclusionary. By the time the smoke had cleared, the SEC had almost 50 percent of the BCS champs. Prior to the BCS, just over 10 percent. In the CFB Playoff era? We’re currently at 33 percent but we need a larger sample size.

If there has been a sea change in the SEC, however, it’s probably in coaching. There was a point when nearly half the conference was made up of coaches who had won a championship. Today, Nick Saban stands alone. Probably because of Saban’s dominance, coaches have gone on to more fruitful pastures to win or just simply aren’t coaching anymore.

If there’s another reason, it’s probably because the game is so widespread to find on television, exposure means you don’t need the backing and support of one powerful network to get all over television. Players have the opportunity to see more programs live, more styles, more coaching staffs, and all programs to this point can sell the “you’ll be able to see your son on television weekly if he comes here.”

But if I’m to be consistent in closing this out, it’s a year-to-year thing still. How you define “best conference” stuff is pretty much able to be manipulated however you want the results to come out. The SEC will have its years on top, it will have its years in the middle, and nothing will really have changed other than perception. You can mostly blame the CFB Playoff for all that.

Phil Harrison: I honestly think the SEC has slipped a little, and it all starts with recruiting. Sure, Alabama continues to land fantastic class after fantastic class, but we are continuously seeing teams from other conferences now consistently show up among the top of those classes. USC and Penn State are coming back from sanctions and back in the game of recruiting, Ohio State and Michigan are getting it done year over year, and that’s just scratching the surface. When other teams rise, it means some must fall, and that’s what’s happening with the SEC.

And it has shown on the field too. No longer does the Southeastern Conference have a stranglehold on the national title. It was truly a historic run, winning seven straight national titles for the conference from 2006 through 2012, but now it appears to just be Alabama making its way through the revolving door. After Florida State broke through and knocked the SEC monkey off of every conference’s back in 2013, it’s been Ohio State from the Big Ten in 2014, Alabama again in 2015, but Clemson from the ACC last year.

So yes, the gap has almost completely closed and there’s no end in sight. The Big Ten now has the best collection of coaches, not the SEC. Kids are now realizing that great football is played in other parts of the country and starting to go there.

All that being said, the conference that everyone loves to hate is still an unbelievable league with good coaches and great players. It’ll continue to be in the team picture for the best conference in the country. But it’s a cyclical world, and no conference is immune to peaks and valleys. The SEC had a very long run on top, but it’s now come back to the pack.

Matt Lichtenstadter: In the past, the SEC used to be a very top-heavy conference with Florida/Tennessee/Alabama dominating the league, maybe one other team joining them, and that was it. But from 2006 to 2013, the SEC was the big dog across the land. But other conferences, especially the ACC, have caught up big-time. There is no doubt that the SEC is a really good conference with some depth behind Alabama for sure, but the dominant league it once was is now history.

The death-trap that used to be the SEC West is really now just Alabama and everyone else. And in the East, Tennessee has never quite lived up to the hype and Florida is still searching for a QB. College football is very top-heavy at the moment, but the SEC’s strength was not necessarily how good its best teams were, but mainly how good the depth teams were. That’s not so much the case anymore. The B1G and ACC really do, in some ways, have more depth from top to bottom than the SEC.

But it will be hard to get that dominant feeling the SEC had for so many years out of our heads. It really is a remarkable accomplishment what the conference did, and the legacy that has now left. But that legacy is a bit outsized compared to the product on the field, which is going through a transition phase right now that requires a re-calibration in thinking.

Terry P. Johnson: I’ve never subscribed to the narrative that the SEC was that much better than everybody else. Sure, the league had a great run during the BCS era, and it should be commended for that. But it wasn’t nearly as good as many suggested that it was. In other words: the “The top half of the SEC could beat an NFL team” or “that team would have four losses against a SEC schedule” arguments weren’t true then, nor are they now.

The bottom line is that college football is cyclical. Just four or five years ago, people said the ACC was the weakest Power 5 conference and that it was on the verge of extinction. Last season, the league was the best in the land. It went 45-14 in non-conference play, the top mark in the nation. That record included wins over Alabama, Ohio State, Penn State, Michigan, and Florida.

Put another way, the ACC and Big Ten have already closed the gap. The Pac-12 and Big 12 aren’t that far behind.

Will the SEC be the best conference in the land this year? I’m not convinced just yet. After all, only one team won more than 10 games last season.

However, the only way we’ll have a definitive answer to that question is for the teams to settle the issue on the gridiron. Fortunately, the season kicks off in just a few weeks!!

Kevin McGuire: The gap between the SEC and the rest of the power conferences has slowly been closing in recent years, and that has been happening for a few reasons. The biggest reason I would point to is the coaching turnover you are starting to see in the SEC. There is one reason Nick Saban is the only coach still in the SEC since the day he returned to the conference after a miserable experience with the Miami Dolphins.

Every SEC school has made at least one coaching change in their program since Alabama signed Saban to a contract. A few have made multiple coaching changes during that span. While Saban has been building a monster of a program with a masterful blueprint and unrivaled support, every other program has been working to try and catch up to Saban and the Crimson Tide. In 2017, that should once again be the case, where Alabama will be seen as the flag-carrying program for the entire SEC, although other programs will have an opportunity to prove the SEC is still deeper than what is found in Tuscaloosa.

Florida taking on Michigan, for example, is a major statement game not just for the Gators, but the entire SEC. A few years ago the ACC challenged itself to perform better in national spotlight games against other conferences. Now, the SEC isn’t quite in that situation, but picking up some noteworthy wins would certainly be a confidence boost for the conference.

The SEC still pulls in the top high school talent, and the conference continues to turn out a ton of NFL players as a result. The coaches may not collectively be what they once were, but anyone who thinks the SEC is rolling over for the ACC or Big Ten is probably going to be disappointed.