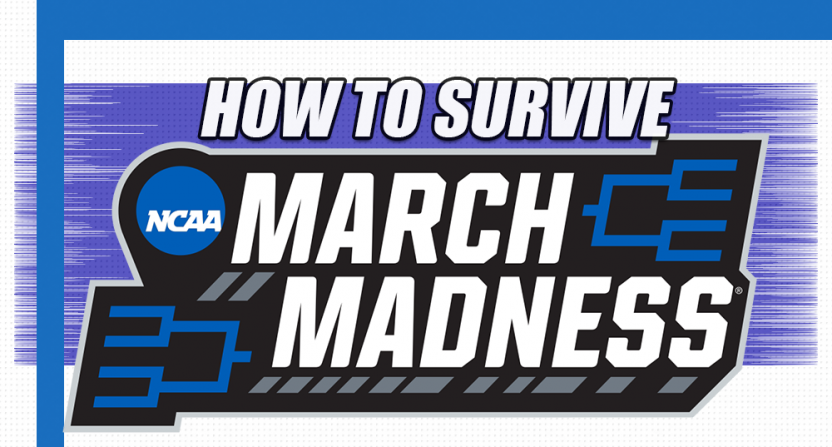 Let’s get ready to gamble.

According to the American Gaming Association, $8.5 billion will be wagered on March Madness. Thank you, Supreme Court! The striking down of the Professional and Amateur Sports Protection Act has opened the door to more sweet action than ever before.

“During this year’s tournament – the first in post-PASPA America – sports fans are expected to bet 40% more than they did on this year’s Super Bowl,” Bill Miller, AGA’s president and chief executive officer, said. “Unlike any other sporting event in the country, March Madness attracts millions who fill out brackets, make casual bets with friends or wager at a legal sportsbook, which Americans can now do more than ever before.”

Here’s to wasting precious company time by viewing the games at work (Hide in the bathroom and watch it on your phone). Call in sick (exaggerated cough, sneeze). Take bereavement leave after the untimely death of Uncle Bob (RIP. He was so young. #DragonPoxSucks).

Who’s going to win it all? Insert emoji shrug. Again, this isn’t the best way to determine a national championship game. It’s just the most exciting. Last year, Michigan should’ve been knocked out in the second round, but was saved by a miracle three-point shot and reached the title game. In 2014, No.7-seed Connecticut captured the title.

Slogan: “Killing offensive basketball one dribble at a time.”

Guess who’s back, back again. Tony’s back. Tell a friend. Tony Bennett returns as No.1 seed with the world’s slowest basketball team. You get the feeling that the Cavaliers would love to play their games with a deflated basketball and a court covered in molasses. Bennett’s shot-clock-draining offense helped him win a share of the ACC regular-season title with North Carolina. That is commendable. But that style also resulted in the biggest upset in NCAA history last year when his Cavaliers became the first No.1 seed to lose to a No.16 (UMBC). That was embarrassing. Virginia might have the easiest path to the Final Four. According to Five Thirty Eight, the Cavaliers have a 49 percent probability of reaching the national semifinals. But if the Cavaliers get sent home early again… oh boy.

Of all the amazing things that Zion Williamson has done, this is the most astounding: Zion has made these Blue Devils the most likable Duke team ever. He’s television and box office gold. There hasn’t been a star quite like this in recent memory. A lot of casual sports fans will be disappointed if they don’t get to see the Blue Devils in the Final Four. Duke has only lost twice with Zion at full strength (vs. Gonzaga and at home to Syracuse). You might wonder if Duke’s awful three-point shooting (30.2 percent) will catch up with them. But there’s a possibly that the Blue Devils won’t be challenged until a possible regional final game vs. Michigan State. Duke is the betting favorite to win it all.

According to one metric, this is the fastest-playing North Carolina team Roy Williams has ever had. These Tar Heels are averaging 78 possessions per game – fifth most in the country and the most of any NCAA tournament team. That would singe Tony Bennett’s eyebrows. Fast pace has led to great results. Few teams are playing better basketball entering the tournament. North Carolina has won 15 of 17, and those losses came against the other No.1 seeds: Duke (74-73) and Virginia (69-61). The Tar Heels played the second-toughest schedule in the nation and went 11-1 on the road. A rematch against Kentucky in the regional finals seems inevitable.

Slogan: “The only great team on the West Coast.”

Quit complaining about Gonzaga’s schedule! Coach Mark Few can’t help it if the rest of the West Coast Conference is meh. The Zags beat Duke to win the Maui Invitational. Their only out-of-conference losses were to the best Tennessee team we’ve seen in ages, and at North Carolina. The Zags went 16-0 in the WCC before suffering a hiccup to Saint Mary’s 60-47. Ken Pom rates Gonzaga the second-best team in the nation behind only Virginia, and Gonzaga has the best offensive efficiency. Its current overall team rating is higher than the Gonzaga team that lost to North Carolina in the 2017 NCAA title game. Gonzaga deserves your respect.

Cue the X Files music, because the truth is out there. When you have a committee making decisions in secret, you’re going to invite rampant speculation. The NCAA could eliminate all this by broadcasting the actual selection process. But no. Yes, we know it’s a difficult process to accommodate everyone and assemble a fair and balanced bracket. But there is no freaking way that all of the following happened by chance:

Plausible deniability here for the committee. It’s possible that it’s completely unintentional that two of college basketball’s most exciting players will face off against each other. The seeding makes sense, so it doesn’t seem totally contrived. Plus, who is going to complain about Morant vs. Howard? Can’t wait to watch these two go mano a mano in a steel cage match. Interesting twist here: the last time Murray State was in the tournament, it lost in the Round 32 to… Marquette in 2012.

This is where you start raising an eyebrow. The police don’t believe in coincidences and neither should you. If Arizona State defeats St. John’s in a play-in game Wednesday night, it will face Buffalo. Hurley, the man responsible for laying the groundwork for the unprecedented success Buffalo is currently enjoying, could face his former employer. Hurley thinks the committee has a twisted sense of humor. He guided the Bulls to the 2015 NCAA Tournament before bolting for Arizona State. Now, Hurley could take on former assistant, Bulls coach Nate Oats.

“I see what’s happening here.”#Sundevils Coach Bobby Hurley had a feeling #ASU was in #MarchMadness when he saw #Buffalo pop up at six seed. pic.twitter.com/PVpkrCTG7q

Aw. C’mon! This is the equivalent of being forced to have Thanksgiving dinner with your ex-wife, her parents, and her new boyfriend. No one is buying this as mere coincidence. Go sell crazy somewhere else, tournament chair Bernard Muir! There is no possible way that the committee overlooked the fact that it matched Rick Pitino’s son – a former Louisville assistant – against the school that Rick Pitino coached to the 2013 NCAA title, and the school that fired him due to the shoe scandal. Ex Louisville players and fans don’t like it. But is it a revenge game, Richard Pitino? He says no.  BTW, Rick Pitino is coaching in Greece so he probably won’t be at the game.

We welcome in NCAA basketball committee chair Bernard Muir to talk about the totally random matchup of Pitino’s son vs Louisville… pic.twitter.com/bUJzrmy1l1

However, No. 12 Liberty (28-6) vs. No. 5 Mississippi State (23-10) is intriguing. The Flames, coached by Tony Bennett disciple Ritchie McKay, play the same slow methodical pace (12th in fewest possessions per game (66.5). Mississippi State is just 9-7 away from home.

The Final Four we deserve