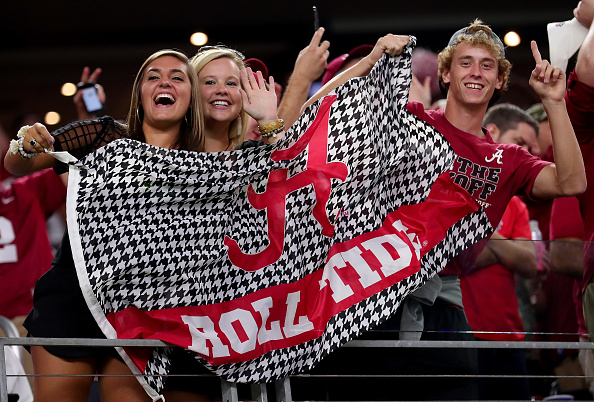 Telling women how they should dress at a sporting event seems like a bad idea in general, and publishing an article telling female fans how to dress seems like a worse idea. However, that apparently didn’t occur to The Huffington Post.

On Monday evening, the publication ran an article in their contributors section titled “Young ladies of the SEC, cover it up!”, which was from Alabama fan Rebecca Walden in response to what she saw at the Alabama-USC game Sept. 3. iMediaEthics suggests this may be the same Rebecca Walden whose LinkedIn account says she graduated from Alabama in 2000 and is now the director of marketing for Texas A & M’s School of Law. The piece has since been deleted, but Mediaite has the highlights:

What we didn’t want, and what we never did, was to show up for a college football game looking like we belonged in a Victoria’s Secret fashion show,” she scolded after the game, USC’s worst loss in fifty years. “More than once at that last ballgame, I wished I could have wrapped my elephant scarf around one of you, teetering around on stilettos with your bra straps exposed and operating under the misguided notion that you looked irresistible. I wondered if your mother knew what you were wearing.”

“Families attend these games. Little eyes are watching you,” she continued. “On behalf of them, and the rest of us who feel embarrassed for you as you walk by, stop baring almost all in the name of game day fashion.”

Here’s more from Walden’s piece, as relayed by Darby Crane at The Tab:

Dear young ladies of the SEC, can you do us all a solid and start covering it up? I wondered if your mother knew what you were wearing…I wanted to tell you that if you’re doing this for a boy, he’s not the one for you. I wished you understood that a trend can be interpreted as fun and flirty without being tasteless. Most of all, I hoped you would soon wake up to embrace the ethos shared by higher learning institutions everywhere – class.

“That lucky shaker tucked into the back of your on trend boot? The team logo you’re sporting on your cheek? The Greek letters sticker on your shirt declaring the sorority to which you belong and your loyalty to your team? All rendered classless by those ill covered curves you’ve made sure are on full display.”

Oof. Throwing out a “class” is never a good sign. Walden’s piece has taken fire from across the internet, and for good reason. Here’s some of Crane’s well-reasoned criticism of both the article and the HuffPo’s role in publishing it:

Rebecca Walden wrote an article on the Huffington Post yesterday, addressing young women at SEC colleges to “cover up” on game days. If you didn’t get a chance to read it before it was taken down, you didn’t miss much – it was body shaming 101.

The tone of the article was rude, laced with degrading comments attempting to police the bodies of young college-aged women. If women felt any sort of confidence and pride in their game day outfits, the author set out to make them second guess it, ultimately making women feel ashamed of themselves. All because they don’t dress according to her standards.

…For the Huffington Post to allow an article of this content and tone to be published on their website is disappointing. It does not inform, inspire, entertain, or empower, which are the four words clearly shown at the top of the website to describe their stories. Instead, it degrades young women and their worth based on what they choose to wear while attending a football game.

The article has been removed from the site, but how did this get the “OK” from publishers in the first place? Huffington Post, I’m disappointed. As a publisher, you’re aware your platform reaches many readers. So why publish something that goes against your core values?

Here’s the Post‘s response to Sydney Smith of iMediaEthics:

iMediaEthics contacted the Huffington Post to learn the reason for removal and further comment. The Huffington Post sent iMediaEthics a statement from Bryan Maygers, Executive Contributors Editor, reading, “This piece was a self-published contributor post. We reserve the right to remove posts which are inflammatory or inconsistent with our values, which we found this post to be.”

Well, at least they took it down, but publishing this in the first place is highly problematic, and the story received over 13,000 views before it was deleted. It’s not surprising there was so much backlash to this, and this might illustrate that the Huffington Post may want to be more careful with what it lets contributors publish.
[iMediaEthics]