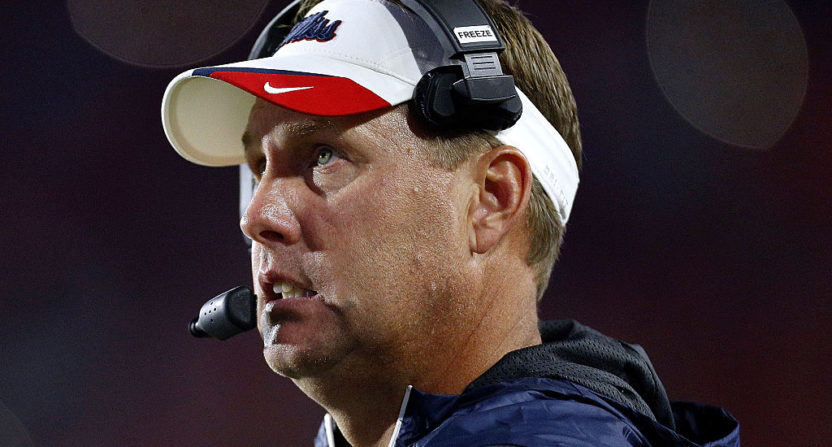 It was bad enough when Hugh Freeze resigned after reports that he made a phone call to an escort using his work cell phone. About two weeks later, a strip club near Starkville announced it would be hosting a “Hugh Freeze Tribute Party.”

Now, two weeks later, there’s more bad news for Freeze. According to ESPN, Freeze didn’t just make one phone call to an escort. Or two, or three. Rather, the coach known for his piousness used his university-issued phone to make at least a dozen phone calls to numbers related to escorts and/or escort services.

That’s a lot of phone calls.

The phone records were obtained by ESPN and showed that at least 12 calls were made to phone numbers “associated with online advertisements for female escorts.” Freeze didn’t make the phone calls all at once either, but instead over 33 months starting in April 2014. Typically the phone calls lasted two minutes or less.

This new revelation to the public makes sense when considering what Ole Miss chancellor Jeffrey Vitter said back in July after Freeze resigned:

“A pattern of personal misconduct inconsistent with the standards we expect from the leader of our football team.”

“Any personal calls having no relation to UM business are not public records,” Jolly told ESPN. “Personal calls will be clearly marked and redacted from the documents released.”

Of course, Freeze’s calls to escorts were not related to Ole Miss official business. Athletic Director Ross Bjork told ESPN back in July university officials were looking at Freeze’s phone records after a lawyer who was planning on filing a lawsuit against Ole Miss and Freeze (on behalf of former Ole Miss coach Houston Nutt) warned the school about their existence.

The Rebels went 5-7 last season and kick off their 2017 campaign on Saturday September 2nd against South Alabama. Matt Luke is currently the interim head coach for Ole Miss.