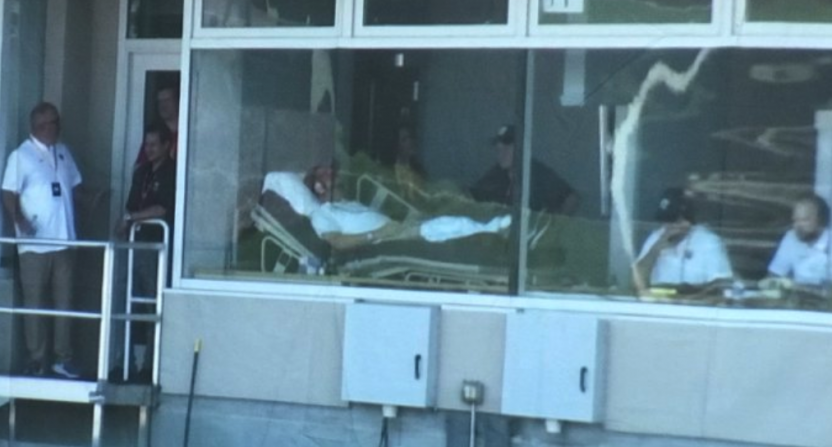 The 2019 college football season has welcomed back a few coaches to the sidelines. Mack Brown and Les Miles each scored a win in their first games back in the game in Week 1, with Brown coaching at UNC and Miles taking on the job at Kansas. Another coach who is back after a brief absence from the game is Hugh Freeze. The former Ole Miss head coach is now at Liberty, but his return to the game is likely the most bizarre we have seen.

Freeze made his Liberty coaching debut Saturday night against Syracuse from a hospital bed located in the coaches’ booth. Not only that, but he also did a pregame interview with ESPN, because why not?

Here’s a look at Hugh Freeze’s seat in the coaches’ booth.

Freeze will essentially videoconference with his team pregame and at halftime and do so during postgame press conference.

The plan is to fly him to Louisiana next week to be with the team on the road. pic.twitter.com/YA1HAXiQ43

So why was Freeze in a hospital bed in the press box at Liberty?

Freeze took a leave of absence from the Liberty football program at the beginning of fall camp a few weeks ago to deal with a severe medical situation. It turned out to be pretty serious as Freeze was diagnosed with a potentially life-threatening staph infection. He was recently released from the hospital, but needs to undergo a lengthy recovery process that can take up to four to six weeks. So it is entirely possible Liberty arranges for a medical bed in the coming weeks just in case Freeze needs it.

There is something to be said about a coach being this dedicated to his job and his team, and you can understand the desire to get back in the game after the way Freeze went out at Ole Miss. But seriously, would anyone blame Freeze for taking another few weeks off if this is how he has to go about his job? Say what you will about Freeze and his history, but there is certainly a time and place for coaching football and this doesn’t really appear to be either for Freeze.

Freeze, who proclaims Jesus is the only one who can handle his junk, resigned from his position as head coach at Ole Miss amid controversy when it was discovered he had used his cell phone to call an escort service when on recruiting trips. Maybe that wouldn’t have been the worst thing in the world, relatively speaking, but the family man was found to have done so while using a university-provided cell phone.

As Ole Miss moved on without Freeze and the NCAA investigated the school and eventually slapped it with sanctions connected to the Freeze era, two years passed by with no job prospects for Freeze. That changed last year when Liberty made the call to Freeze to bring him in as the head coach of the newest FBS program. But his debut there has come in strange fashion.