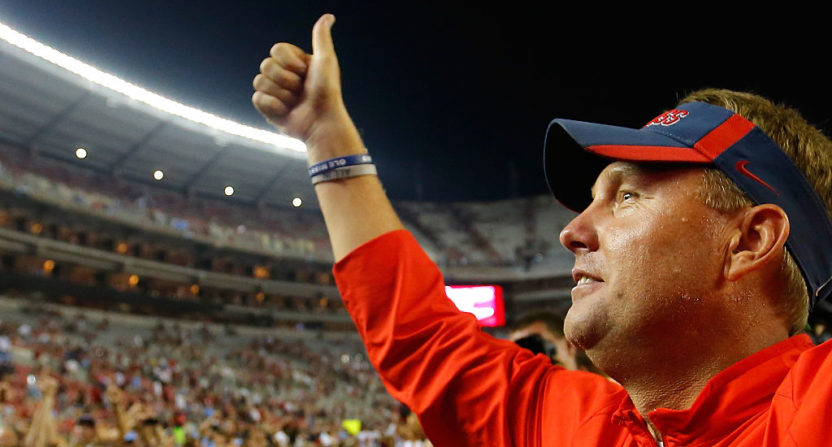 Ole Miss and former coach Houston Nutt have been embroiled in a legal battle over what Nutt considers a smear campaign in the wake of a massive NCAA investigation into the Ole Miss football program. That investigation (and Nutt’s suit) just resulted in Hugh Freeze’s immediate resignation from the program.

Let’s just pause for a moment to note that Ole Miss, a program that is at the moment at a low point and ripe for comedy, went to the trouble of pointing out on which network this press conference will air. They even followed it up with further information

The final straw for Freeze was likely this piece of information, first reported by USA Today reporter Dan Wolken:

A one-minute call made from the University-issued phone of Ole Miss football coach Hugh Freeze to a number associated with a female escort service was raised as a potential issue in the back-and-forth between the university’s legal counsel and the attorney for former Rebels football coach Houston Nutt, according to records and correspondence obtained by USA TODAY Sports.

Freeze resigned Thursday evening, hours after Ole Miss said it would provide a written statement to USA TODAY Sports regarding the phone call.

School officials did not immediately offer a reason for the resignation.

It sounds like the Nutt lawsuit is what brought this escort phone call to light:

On July 13 — one day after Nutt filed a federal lawsuit against Ole Miss alleging that the school violated the terms of its severance agreement — Nutt’s attorney, Thomas Mars, sent an e-mail to Lee Tyner, the school’s general counsel, referencing a “phone call Coach Freeze made that would be highly embarrassing for all of you and extremely difficult to explain.”

The call, which was made on the evening of Jan. 19, 2016, to a Detroit (313) area code, lasts just one minute, according to e-mails exchanged between the two parties. But the phone number is associated with several Web sites advertising a female escort based in Tampa, Fla., USA TODAY Sports has independently confirmed. The phone number has been disconnected.

Well, sure, you can’t keep the same number for years as an escort, that’s just asking to get busted. It should also be noted that this was apparently the final straw despite an investigation that had uncovered multiple recruiting infractions of the sort that most coaches don’t come back from, but hey, that’s the SEC for you.

Matt Luke takes over a program that is in a pretty bad place at the moment, with very little time to prepare for the season. That’s not an enviable position. And who knows, things could get worse! We’ll just have to wait for the press conference to find out. There aren’t really any winners in this entire fiasco, from the Ole Miss administration to Freeze to Luke, the man tasked with weathering the storm.

Well, Houston Nutt, maybe, although based on his time at Ole Miss, it’s pretty clear he’s not really much of a winner either.