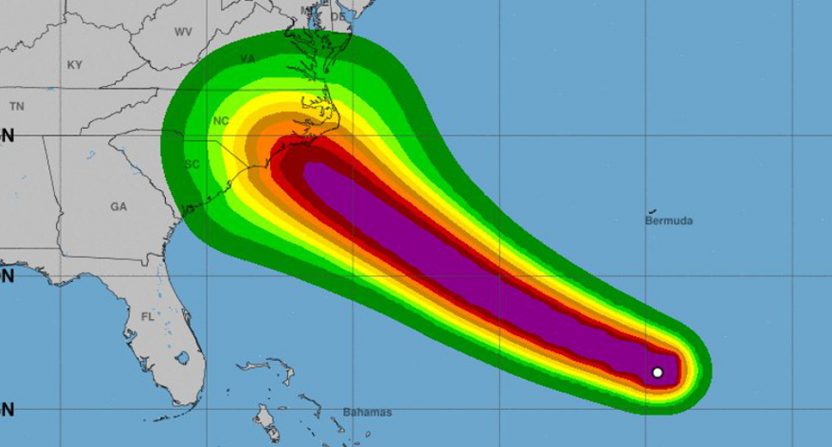 Virginia and the Carolinas appear to be in significant danger from Hurricane Florence, upgraded to a category 4 hurricane Monday. According to the National Hurricane Center, hurricane-force winds could make landfall as soon as Wednesday night, and a wide area centered on Virginia and North and South Carolina faces dangers from winds and flooding. That’s already having a drastic effect on scheduled college football games, and there may be more to come. First, the projected map:

#Florence is likely to cause damaging hurricane-force winds along parts of the
coasts of South & North Carolina, & a Hurricane Watch is in effect for some of this area. Damaging winds could also spread well inland into portions of the Carolinas & Virginia https://t.co/tW4KeGdBFb pic.twitter.com/DzNeyuPLYV

Football Scoop has a thorough list of the major college football games that could possibly be affected by this. Here are some that have already been changed or cancelled and of their planned or actual broadcasters):

Wednesday, Sept. 13: Campbell at Coastal Carolina; originally scheduled for Saturday, has been moved to 2 p.m. ET Wednesday at Campbell. Originally set for ESPN3, no word on if that’s changed.

We’ll update this post as more information comes in. Meanwhile, some, like CBS’ Danny Kanell, are already complaining about these games being cancelled:

Hate these games being cancelled due to hurricane. Couldn’t they have waited another day or two to see what the impact of hurricane is… if any at all??

Kanell got thoroughly dunked on for that one:

Danny Kanell will fight that Hurricane if it comes to that pic.twitter.com/vFOrneD941

I say it's high time we play games in active volcanoes

If you're actually sincerely interested in why an abundance of caution deserves to be taken in this situation @dannykanell (which you probably aren't) I reported on it last year. https://t.co/8369FhKNgJ

I hate it too, but millions are evacuating the coast & interstates are going to contraflow. Logistically it would be a nightmare, and extremely dangerous to bring in tens of thousands in from out of town. The precise track will be adjusted, but catastrophic impacts are likely.

Proof that Danny Kanell doesn’t understand the impact hurricanes have on local and state resources. https://t.co/HrMdiQauJM

We’ll see if anyone else drops hurricane takes, too.

1 thought on “Hurricane Florence has led to numerous college football games being moved or canceled, impacting TV lineup as well”