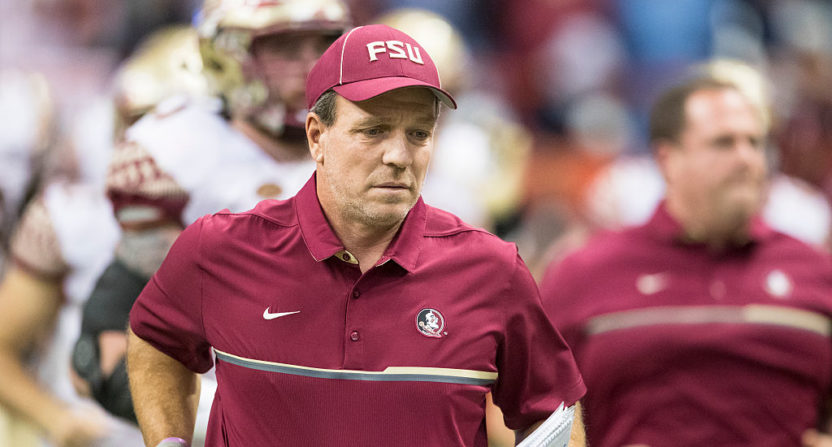 Hurricane Irma is no joke, and college football programs in the state of Florida are not messing around when it comes to the safety of their players, students, and fans. On Thursday night, Florida State announced the school was closing down from Friday through Monday, which means all sporting events scheduled will be canceled as well. That includes the Florida State home opener against Louisiana-Monroe.

ALL FSU ATHLETICS EVENTS SCHEDULED FOR THIS WEEKEND ARE CANCELLED INCLUDING SATURDAY’S FOOTBALL GAME. Info: https://t.co/LxTBNwNzSa for

As it stands now, all three power conference programs in the state of Florida have canceled their games this weekend, with no makeups currently scheduled. Miami was the first program to cancel their game, a road trip to Arkansas State. The Hurricanes were criticized for their decision so early, but with Hurricane Irma heading directly toward Miami, the school stood by their decision to put the safety of their representatives first, with an unknown situation awaiting them when they were to return from their road trip. Arkansas State did drop a hint that Miami refused to play a game on Friday instead of Saturday, but Miami made the call they felt best for their program and all parties involved that would have been making the trip.

Miami and Florida State now have bye weeks this weekend before facing each other next week in Tallahassee, as long as the weather cooperates of course. In between cancellations from the Hurricanes and Seminoles was the decision by Florida to cancel their home opener against Northern Colorado. After the mess that resulted from a hurricane-impacted game last season against LSU, Florida eventually made a similar decision to scratch their game completely. With this not being a conference game and just a tune-up game against an FCS opponent, there was far less drama involved here.

USF at UConn will not be played due to Hurricane #Irma 's threat to state of Florida & safe travel.

South Florida was supposed to play a conference game at UConn, and the two schools agreed to bump up the kickoff time to earlier in the day on Saturday with a 10:30 a.m. ET start time. However, those plans have been nixed entirely and the game will not be played as scheduled. There is still some uncertainty as to whether the game will be made up at a later time, which will require some schedule shuffling on both sides if it is going to be possible, and that may require getting third and fourth parties involved in the shuffle to make it possible. The two schools are division opponents, so getting the game played at some point could be important for the AAC division title picture down the line, once the storm has passed.

Speaking of the AAC…

After originally rescheduling the game to be played Friday evening instead of Saturday, the game has now been canceled. Making matters more frustrating for Memphis, they reportedly did not find out until arriving in Orlando on Thursday night, according to Memphis sports radio host Eli Savoie.

The Memphis Tigers game at UCF has now been canceled. Tigers will fly back home tonight

It’s unknown if the game will be made up at a later time.

The Panthers are moving their home game to Birmingham, Alabama to play the game at Legion Field (home of UAB football). But one has to wonder if the game will be worth the price to move the program to Alabama for one week against an FCS opponent. For FIU, the hope is the game will result in a win to help get the Panthers closer to bowl eligibility later on in the season, but don’t be stunned if this game is canceled too.

Lane Kiffin’s FAU Owls practically held Navy hostage last week during an extended weather delayed season opener. Now, FAU is on the road to take on the Wisconsin Badgers far away from the storm. For now, the game is scheduled to be played without interference, and Wisconsin has offered to help pay for lodging should FAU need it after the game. The noon kickoff is not expected to change and FAU intends to head to Madison on Friday as planned. Knowing Wisconsin will make accommodations available if needed in Madison for however long after the game is played is comforting for FAU, but of course far from ideal.

NAIA programs Warner and Southeastern have also canceled their games this weekend.

For an updated list of all games being affected by the storm, the college football community on Reddit has a good resource of updated information from Florida, Georgia, South Carolina and North Carolina. Hurricane Irma is expected to travel up the east coast and could impact events in all of those states in the coming days.