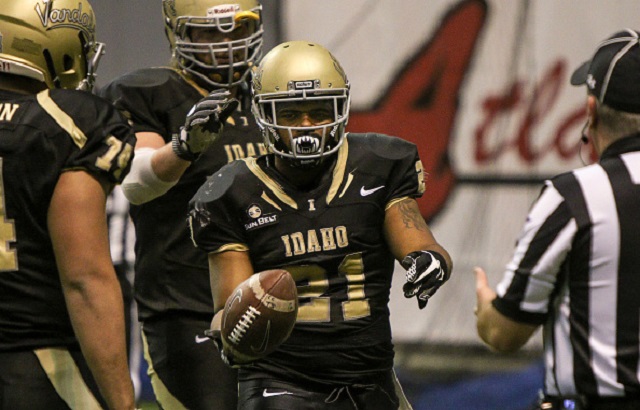 Conference realignment has claimed many victims since it ran roughshod over the college sports landscape between 2010 and 2015, but Idaho was hit harder than anyone else. They’re the first (and thus far, only) school to move from the football bowl subdivision (FBS) level down to the football championship subdivision (FCS).

Long one of the sport’s toughest coaching jobs, Idaho has spent much of its history struggling to remain competitive. Its location in Moscow, Idaho is a bit of a remote outpost, even by college football standards. Their home stadium, the Kibbie Dome, holds just 16,000 fans. They’ve only had one nine-win season (1998) at the FBS level. And their closest rival is Boise State, who overshadowed them as one of the most instantly recognizable brands in the sport.

Those are all contributing factors to why the Vandals are moving down. But they may also be why Idaho is thriving in a last-ditch effort to make their mark on the FBS.

Idaho head coach Paul Petrino didn’t seem fazed by the prospect of moving down when asked about it this offseason. In fact, he was far more anxious to talk about the possibilities for this year, especially on offense.

Using that offense, Idaho’s put the Sun Belt Conference (and others) on notice.

After predictable drubbings at the hands of Pac-12 North powers Washington and Washington State, the Vandals picked up a big road win at UNLV, scored 34 on UL-Monroe and then 55 on New Mexico State. They suffered October losses to Troy and Appalachian State, too. But the narrative was being set up quickly: Idaho was going to make a run at the postseason.

The Vandals are now 5-2 in the league, in fourth place. They can jump as high as a tie for second should Arkansas State and Troy falter this weekend while Idaho plays 3-8 Georgia State to wrap up its season. A win against the lowly Panthers would mean an 8-4 finish, and the program’s first shot at nine wins (including a bowl) since 1998.

Petrino, rightfully, trusted his offense and his quarterback, Matt Linehan. The junior QB has already recorded this third-straight 2,500-yard passing season, and is within shouting distance of the conference lead for passing yardage. Idaho has the third-best scoring offense in the Sun Belt at 27 points per game. In-conference, they’re scoring nearly 33 points per.

Is all of this a sustainable future for Petrino and the Vandals, though? They get one more year in the FBS and then head down to the Big Sky Conference where the scholarship limits are just 63 (22 less than FBS). That means some quick roster shuffling. However, that fails to give Petrino pause either.

He claims the program recruits just “one year out,” which means the roster is entirely based on the most immediate needs. So a 22-player reduction won’t be the end of the world with two full seasons (this year and next) to get there. It’s also not going to stop them from winning as much as possible while they’re still at this level.

A senior-heavy roster in 2016 could truly make this the last gasp before hitting the hard reset button as an FCS school in 2018. Linehan returns next year, as does running back Aaron Duckworth. But many of the team’s other contributors are in their final seasons in Moscow. Still, this is a future you can build upon.

So if he’s gone soon, and he very well could be, at least the roadmap is now in place. The Vandals won’t be grabbing headlines in the Big Sky, but they have a very real chance to grab wins. There are natural rivalries to be had with Idaho State, Montana, Montana State, Eastern Washington, and others. There’s also a logistical advantage of being a recently demoted FBS school, too.

It’s not the same as an English Premier League club being relegated down and dominating their one season in the Championship. But there are some parallels to be had before Idaho’s former FBS resources dissipate over the course of the next decade.

The Vandals may be headed to a better long-term place, but that doesn’t mean they want to go there. Or that you’re going to forget about them once they’ve left. Despite the struggles and conference switching and lack of exposure, Idaho saved their best act for last. And that’s ultimately what we’ll remember them by.