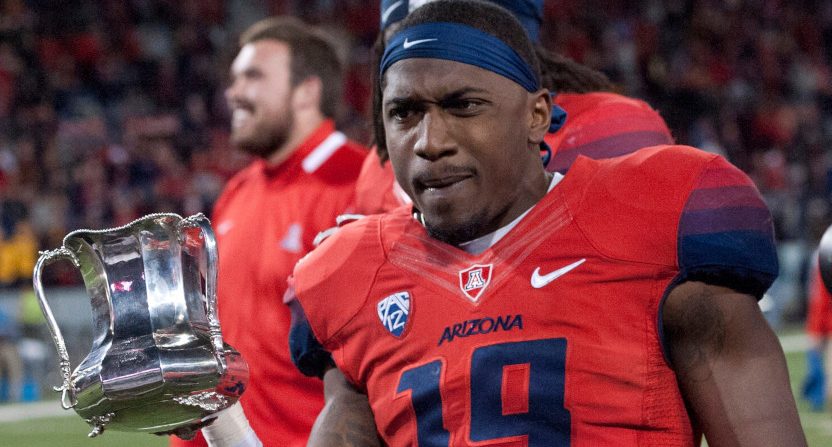 It’s highly unusual to see a college football assistant coach charged with murder, but that’s what’s happened with DaVonte’ Neal. Neal, a former wide receiver and cornerback for the Arizona Wildcats from 2013-16 (he transferred there from Notre Dame, after choosing Notre Dame over Arizona in a bizarre and delayed signing ceremony), joined the Idaho State Bengals (Big Sky Conference, FCS) as a defensive backs coach in January, but was arrested by Pocatello police last week on a warrant from Arizona’s Maricopa County. Neal (seen above after the Wildcats’ 2016 Territorial Cup win against Arizona State) has now been charged with first-degree murder, drive by shooting, and discharging a firearm at a structure, all over a 2017 incident in Tempe, AZ where 25-year-old Bryan Burns died after being shot on an Interstate 10 overpass. Greg Woods of The Idaho State Journal has more on Neal’s arrest and charges, and how Idaho State is ending his contract:

ISU confirmed in an email Wednesday evening that Neal has been placed on administrative leave and the school has initiated proceedings to terminate his contract.

Neal no longer appears on the ISU football roster on the school’s website.

“I have been in constant contact with (ISU head coach Charlie Ragle) who has known DaVonte’ for many years and never had any knowledge or suspicion of a possible crime of any kind,” ISU Athletic Director Pauline Thiros told the Journal via text. “The news of DaVonte’ Neal’s arrest and charges in Arizona was a great shock. Going forward, we will cooperate in every way possible, safeguard our program and culture, support each other and our students, and allow the legal process to work. The news is devastating and we hope for resolution for all involved.”

ISU President Kevin Satterlee said in a written statement that “Idaho State takes all allegations involving our employees very seriously, and we are committed to the safety and well-being of our community. We are fully cooperating with law enforcement on their investigation.”

Ragle, who took over as Idaho State’s head coach in December, coached Neal in high school as the head coach at Chaparral High School (Scottsdale, AZ), a role he held from 2007-11. Ragle also served as Arizona’s special teams coordinator and tight ends coach from 2013-16. So it makes some sense that he brought in someone he knew well from both the high school and college ranks. And Neal had been working as an assistant coach at Higley High in Gilbert, Arizona, so he had some coaching experience. Idaho State also noted in a release that they ran a background check on Neal when he was hired and it came up clean; the warrant for his arrest was only issued last month. So there isn’t necessarily anything they particularly did wrong here, and it should be noted that Neal has only been charged, not convicted. But it’s wild that a current coach has now been charged with a murder that took place five years ago.