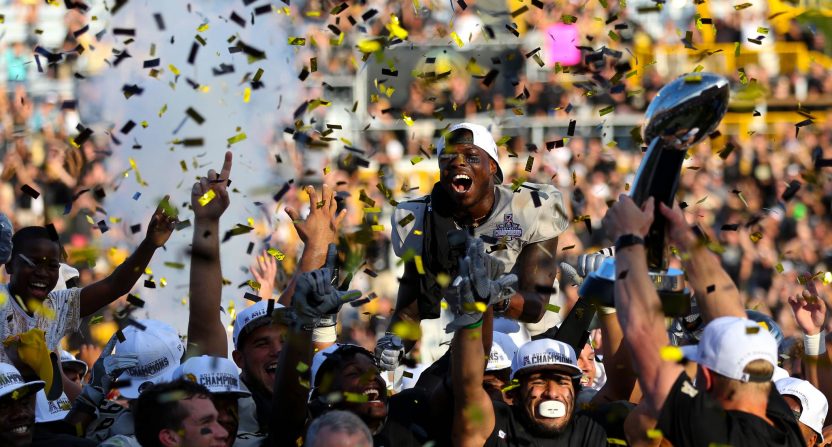 If there’s anything we’ve learned over years of consuming NFL Draft content, it’s that “football people” are weird. Not the good kind of weird, either. They’re the kind of weird that makes you feel uncomfortable. Every year we gain insight into the dumb and overwrought ways that “anonymous scouts” see players, assigning strange and absurd values to people that seem to defy common sense. They look for attributes that seem to exist in the hyper-masculine bubble they’ve created for themselves and demand a moral integrity that seems unattainable (though conveniently seem not to demand the same for coaches).

The thing to remember is that it’s the same in college. When most coaches try explaining why student-athletes shouldn’t be paid, it’s usually under the guise of not having earned the millions they generate or that simply getting the chance to play is payment enough and they should just shut up and be happy. They take everything too seriously. They put too high a value on Football: The Idea and lose perspective about its real place in the world. It’s weird and uncomfortable but so long as they can maintain status quo, they’re not going to change.

That’s what has been so wonderful about UCF Football’s claim to a national title last season after going undefeated, the only team to do so in the FBS. The 13-0 Knights defeated the Auburn Tigers in the Peach Bowl and their AD immediately got to work telling everyone who would listen that the school would be considering this a championship season despite the fact that they weren’t even invited to take part in the College Football Playoff. They handed out bonuses to coaches as if they had won the title and even got a parade for their efforts. The team even unveiled a championship banner, made championship rings, and caused a Wikipedia page war.

The claim also made a lot of “football people” very, very mad. From the get-go, some national pundits derided the whole thing as a dumb publicity stunt that made UCF look silly. Plenty of people pointed to the fact that Alabama had, you know, actually won the national championship. Multiple Alabama players even challenged UCF to play them if they thought they deserved a shot, which was, of course, exactly what UCF was saying.

That’s what we’ve been saying…🤷‍♂️

UCF’s masterful troll job, because let’s be honest, it is a troll job, continues into the 2018 season and in perpetuity. It’s a smart play because it will just continue to generate press and awareness for the program and the school, even as Scott Frost leaves for redder pastures. But also, the claim sticks a very specific thorn in the side of those “football people.” With all their unwritten rules, pomp and circumstance, and “love of the game,” these people just cannot help but get all worked up over UCF’s championship proclamation. This fun campaign that doesn’t hurt anyone and doesn’t besmirch any other program, is something that they simply cannot abide by. And every time they can’t help but whine about it, they’re doing exactly what UCF wants them to do.

Take Nick Saban, who commented at length about UCF’s claims this past weekend. Saban is the best in the game. He has more national titles to his name than any active coach. He’s overseeing the sport’s one true dynasty. He and his program’s greatness is undisputed. They are the defending national champions and have the trophies to prove it. Saban could just laugh off UCF’s claim, an elephant swatting a fly. But instead, he revealed just how much the troll job bothers him, because of “honor” and “respect” or something.

“If you honor and respect the system that we have, (despite) some of the imperfections that you understand that the system has, then you wouldn’t do something out of respect for the system that we have,” Saban told USA TODAY Sports. “I guess anybody has the prerogative to claim anything. But self-proclaimed is not the same as actually earning it. And there’s probably a significant number of people who don’t respect people who make self-proclaimed sort of accolades for themselves.”

“We’ve only had one undefeated team, and that is really hard to do,” Saban said. “So I have a tremendous amount of respect for their team and what they were able to accomplish. … And they can make every claim that they should have been in the Playoff. I get that. But we have a system, and it’s not fair to the people who went through the system and earned their way playing really, really good teams — I mean really good teams — and really tough games. It’s not quite fair to them for somebody else just to decide to (claim a national championship).”

Let’s put aside the fact that Saban refuses to engage with the fact of just how unfair the system is, that there is literally nothing else UCF could have done to make the playoff and they still never had a shot. But just the fact that this notorious curmudgeon goes on and on about how much this bothers him, it’s just so silly and pointless and exactly what we’ve come to expect out of “football people.”

Auburn coach Gus Malzahn was given the chance to add some lighthearted ink to the story when asked what he thinks of UCF’s claim. He could have made a joke or poked Alabama’s title claim. Instead, he went the opposite way as Saban. He refused to engage, which also proved that UCF was committing some kind of terrible atrocity against the sanctity of the game, or something.

Even Frost, the guy who led the Knights to the undefeated season, has distanced himself from the championship campaign. Of course, as the coach of a Big Five program now, he has a vested interest in maintaining the status quo. A door is always open for a program like Nebraska to play for the actual championship. They don’t need the door opened any further to let in teams like UCF. That wouldn’t be very status quo.

Seeing how much this campaign has bothered “football people,” you can be sure that UCF is going to keep it up. The more they do it, the more those people have to answer questions about it, the more their disdain for this monstrosity grows, and the more powerful it gets. UCF will probably never get to play for an actual title, so they might as well create a fake one that can never be taken away from them. Man does that piss off “football people.” And man, it’s fun to watch them remain perpetually bothered by it. For once, it’s nice to see trolling accomplish something good.