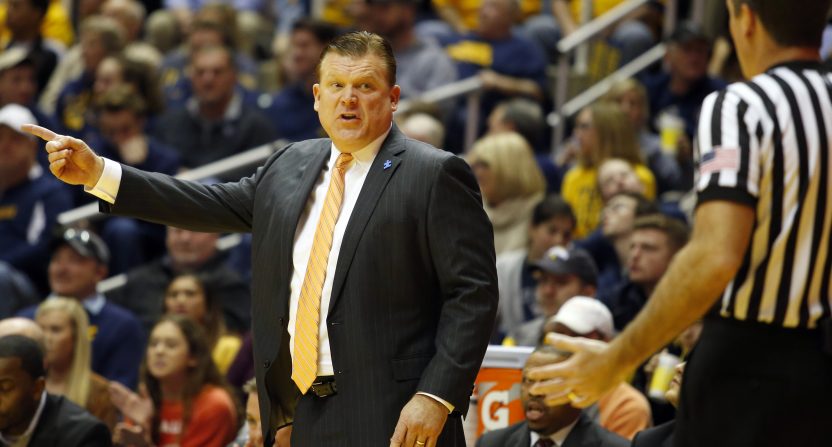 Over the past decade, few athletic departments in the Big Ten or the major conferences have had worse stretches in football and men’s basketball than Illinois.

The big problem? The Illini have hired bad coaches:

But finally, after more than a decade, Illinois looks like it might have hired a good coach, in its flagship sport of basketball.

After initially looking like they would overpay for another mediocre coach, Cal’s Cuonzo Martin, the Illini have made the best hire of this offseason so far, by hiring Brad Underwood away from Oklahoma State after just one season.

Underwood is a maverick in the coaching ranks who coaches a distinct, aggressive style. In his one year in Stillwater, Underwood improved the Cowboys from 98th to 23rd in the KenPom.com ratings, and earned an NCAA Tournament berth, which culminated in a one-point loss to Michigan. According to KenPom, OSU has the most efficient offense in the country, up from 153rd last year.

Just based on his resume, Underwood is a great hire. But he also provides an identity for the Illini that the program hasn’t had in a long time.

This isn’t the old days, when Illinois could just get the best players in Chicago and win. The Illini have built-in disadvantages that other programs don’t have—less money than their Big Ten foes and a location that’s not as great or as close to Chicago as advertised—and thanks to TV, relative location to Chicago doesn’t matter like it used to. If it did, then top Chicago players wouldn’t regularly be spurning Illinois for Duke, Kentucky, North Carolina, Kansas and even Memphis.

Illinois can’t be a national title or even Big Ten title contender by playing everyone else’s game. It needs to be different. Underwood seems to know that, and he’s prepared to mix it up.

“I like the thought of not allowing teams to do what they practice every day,” he said during his introductory press conference.

During that same press conference, he explained that the game is different than it once was, pointing to the use of analytics to gain a competitive advantage. He derided old, unhelpful statistics like “rebounding margin,” and used his own NCAA Tournament loss to Michigan to show why it isn’t helpful in evaluating his team. He pointed to his relationships with two coaches who have had more success in tougher situations than Illinois has had in years: Bob Huggins and “Press Virginia” style with West Virginia, and Frank Martin with his South Carolina team’s relentless aggressiveness, which has helped the Gamecocks advance to the Sweet Sixteen.

Illinois isn’t going to play basketball like business as usual. The Illini are going to push the boundaries of how aggressive coaches are willing to go. There are still questions about whether Underwood can recruit Chicago, and whether the Illinois job is even tougher than anyone thinks.

However, this hire seems different. Underwood has had more success than his predecessors and he has a unique plan the others weren’t willing to try. That’s a start for returning Illinois to prominence.

1 thought on “After a decade of bad hires, Illinois looks like it finally has a future with Brad Underwood”