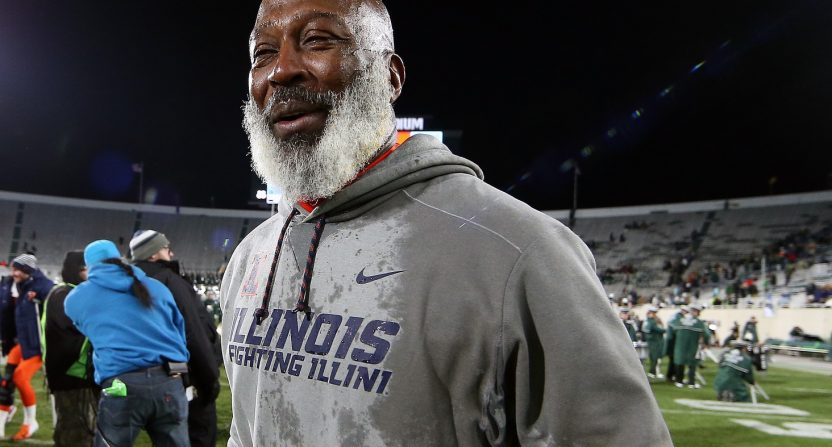 It wasn’t that long ago it appeared likely a coaching change could be in order at Illinois. But what better way to follow up a massive home upset against Wisconsin and a road win at Purdue than by putting together the largest comeback in school history to clinch bowl eligibility? The Illini did just that Saturday, ensuring Lovie Smith will indeed be taking his program to a bowl game for the first time.

Of course we brought a bowling ball to East Lansing. pic.twitter.com/gisl0vF9Dz

Illinois started this season with wins against two dreadful programs, Akron (still without a win) and UConn (fell to 2-8 today following a 48-3 loss to Cincinnati), before losing to Eastern Michigan (4-5 on the season). Then they lost a close game to Nebraska and were blown out by Minnesota (in retrospect, nothing to be ashamed of there). Things suddenly looked gloomy once again for Smith and Illinois, with a 2-3 season leading to some wondering where the program should turn next.

But maybe that was the turning point of the season for Illinois.

Illinois put a decent scare into Michigan on Oct. 12 with a big third quarter, but Michigan woke up and found a way to put the game away in the fourth quarter. If nothing else could have been said about Illinois, it was early evidence that this team was not at all about to quit on their head coach. The following week, Illinois pulled the upset of the year in the Big Ten by shocking Wisconsin to hand the Badgers their first loss of the season and ruin their College Football Playoff odds (Okay, maybe Ohio State did that the following week, but you get the idea). What was described at the time as a program-changing win certainly is looking more and more accurate. Illinois has not lost since. They won at Purdue and took care of business at home against Rutgers for three straight wins. Bowl eligibility was not only in play, it was coming up on the horizon. But road games at Michigan State and Iowa made it seem more likely the Illini would have to punch their bowl ticket in the regular-season finale against Northwestern.

Down 31-10 going into the fourth quarter, that outlook appeared to be legitimate. Brandon Peters opened the fourth quarter with an 83-yard touchdown pass to Josh Imatorbhebhe to spark new life. A three-and-out by the inspired Illini defense led to the offense getting the ball at their own 47-yard line. Five plays later, Peters handed the ball to Reggie Corbin for a six-yard touchdown and things were getting interesting in East Lansing. Michigan State then fumbled on their first play of the ensuing drive, putting the Illini inside the MSU 10-yard line, but Peters was intercepted on a third-down pass. Perhaps this was not the day for Illinois.

Oh, but it was. Check out what happened on the very next play…

Absolute mayhem in East Lansing! @IlliniFootball comes back from 21 down in the 4th quarter on this pick six, but Illinois misses the extra point.

Michigan State did respond by extending its lead to four points with a field goal on the next possession, but these Illini were not to be counted out. Why start now? Illinois went on a 13-play drive starting from their own 25-yard line. On 4th-and-17 from the Illinois 44-yard line, Peters again delivered some magic by converting a pass to Imatorbhebhe for a gain of 37 yards.

A few plays later, Peters swung it out to Dre Brown, who managed to avoid being taken down after a minimal gain to put the Illini on the door step of the go=ahead touchdown.

And with time winding down and teams swapping out players with the clock rolling, Peters rolled to his right and found an open Daniel Barker for one of the most significant touchdowns Illinois has seen in quite some time.

Seconds later, on the ensuing kickoff, the celebration was on.

.@IlliniFootball 27 fourth-quarter points vs Michigan State were the 3rd-most by an FBS team in a game this season. (UCLA 29 vs Washington State, Wake Forest 28 vs Louisville) #Illini #ILLvsMSU

Illinois has not played in a bowl game since losing to Louisiana Tech in the Heart of Dallas Bowl at the end of the 2014 season. That will now, officially, change. The Illini will be going to a bowl game in the Big Ten bowl lineup. But this has been a tremendous season for Smith and the program. After winning three games in 2016 and two games in 2017, things began to start looking marginally better in 2018 as Smith continued to try revamping the program. And despite some of its losses earlier this season, the sense this team was better was still present. But now, things continue to be coming together and resulting in wins, rather than hard-fought losses. While nobody really likes moral victories, Illinois has grown from theirs this season.

We’ll see how this season ends for Illinois, but it will officially be ending later than it ever has before under Smith.