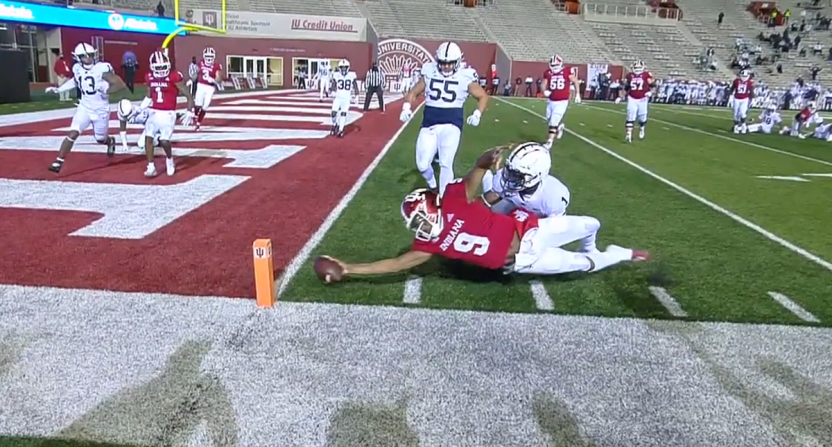 Indiana and #8 Penn State combined for what will surely end up being one of the most exciting and dumbest games of the 2020 college football season, with Indiana knocking off Penn State 36-35 in overtime.

With both teams making their season debuts in Bloomington, there was always the chance for weirdness, but few gave the Hoosiers much of a shot to win. And then, well, both teams looked rusty in the first half, with Indiana capitalizing on Penn State turnovers to take a 17-7 lead into halftime.

Penn State’s Sean Clifford scrambled for a touchdown to end the third quarter, making it 17-14 heading into the fourth. At that point just about every Indiana football fan assumed they knew what was coming: a tantalizingly close brush with a win over a top-ranked opponent, given away in haunting fashion.

And that’s what almost happened. After kicking a field goal to go up 20-14, Indiana’s defense held strong despite spending most of the game on the field. (Penn State finished with forty minutes in possession.) The offense, though, couldn’t get going, and after Peyton Hendershot dropped what looked like a big gainer on third down late in the fourth quarter, forcing the Hoosiers to punt, things unraveled quickly.

PSU scored a quick touchdown to take a 21-20 lead, and Indiana turned it over on downs near their own end zone, giving up sacks on consecutive plays to start what looked like their last-gasp drive.

To this point, things have been following the typical Indiana blueprint, almost perfectly. With just one timeout left, all Penn State had to do was run out the clock. Indiana, meanwhile, expertly employed a strategy that we rarely see attempted, much less attempted successfully:

When you don't mean to score a touchdown 😂😂 pic.twitter.com/64n8sTNRE5

So, after 58 minutes of already wild football, we’re really starting to cook here. Franklin elected not to go for two, even though that would have also basically sealed the game. That’s a somewhat defensible decision, given Indiana’s offensive woes to that point, but on the other hand, the downside is limited. You’re basically trading an extra opportunity to win the game; sure, Indiana would have needed to score a touchdown and convert a two-point conversion to beat you if you don’t pick it up, but “losing after Indiana scores a touchdown and converts to send it to overtime” was also in play.

Either way, Penn State still found themselves up eight with little time remaining. Indiana, though, came to life, with quarterback Michael Penix Jr. finally looking like a threat through the air. His receivers also made a few huge catches as they marched down the field, including this big one from Jacolby Hewitt, for his first career reception.

What a time to make your first career catch Jacolby Hewitt 🔥🔥🔥

With less than thirty seconds remaining, Indiana punched it in from the goal line.

After all of that, though, they still needed to convert the two-point try, and Penix did just that, using his legs:

THE HOOSIERS TIE IT UP @IndianaFootball converts the 2-point conversion to tie it up late against Penn State pic.twitter.com/JhzRvyqz0n

On the conversion that tied the game, Penix said he fired through two progressions and didn't see what he liked so he got out of the pocket and scored. #iufb

As if that sequence of events from the “let him score” working through the two-point conversion wasn’t enough, Indiana’s kickoff specialist elected to try some kind of hybrid onside/squib attempt, rather than kick it deep to force Penn State to work a lot harder.

That mistake meant Penn State actually had a chance to win in regulation, albeit with a 57-yard field goal try, which looked good the entire way.

😳 Penn State missed the game-winning field goal by THIS much pic.twitter.com/PmTKCJdEBl

After all of that, when the game looked to be won before Penn State scored their final touchdown, we had overtime. On 3rd and 7, Clifford rolled to his right and expertly found an open Parker Washington.

After Penn State converted the PAT, Indiana wound up facing 3rd and goal from their nine yard line. Again, they came through, this time via a fantastic grab from senior Whop Philyor.

At that point, Indiana head coach Tom Allen had a decision to make, though it was a decision that he said after the game had already been made.

Tom Allen said he decided during the final drive that if IU scored, they'd go for two.

"One play to win it. We’ve been close, and I’m sick and tired of being close. I just decided, told the offensive coaches to be thinking about that." #iufb

And Indiana went for it, leading to this:

Indiana went for two in overtime and got their first win over a top ten team on this absolutely insane final play pic.twitter.com/p9GOCLx6Od

Just an incredible finish to an incredible game. For Indiana, though, both for fans and for players and coaches, it’s a catharsis. The Hoosiers hadn’t beaten a top-ten ranked opponent since October of 1987, and that’s despite having plenty of chances every year playing against a difficult Big Ten East schedule.

Last season felt like a breakout year, with Indiana going 8-4 only to end up collapsing against Tennessee in the Gator Bowl, a game that played to the exact type this one did right up until Penn State scored the unnecessary touchdown. It’s a shame that fans won’t be able to safely celebrate in the kind of numbers they would otherwise be able to, because if any Power 5 fanbase deserves it, it’s probably this one.