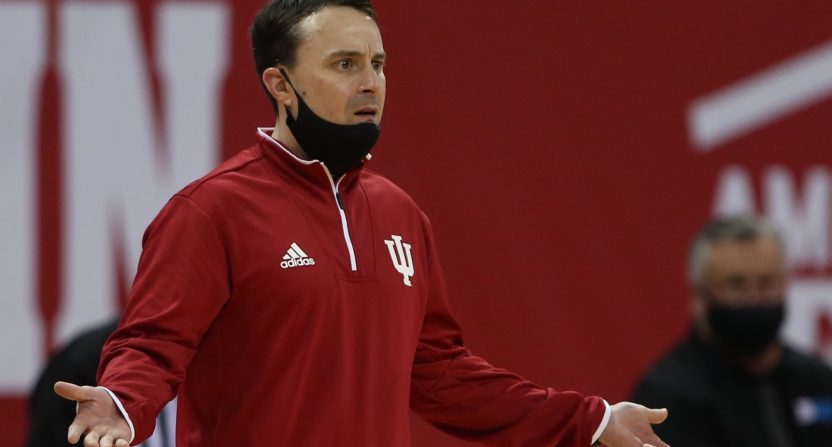 Indiana University has enough of Archie Miller after four seasons with no NCAA Tournament bids.

Athletic director Scott Dolson announced Miller’s firing in a statement (via the Indianapolis Star) that mentioned that “private philanthropic funding” gave Indiana the ability to dismiss its men’s basketball coach, something which otherwise likely wouldn’t have been possible under budget restrictions due to COVID-19.

Put another way, a wealthy booster — or boosters — was willing to pay the $10.3 million buyout that Miller’s contract mandated. (Anybody check with Mark Cuban?) That number is the sum total of what Miller would’ve been paid for the final three years of the seven-year deal he agreed to in 2017.

How badly did Bloomington’s power players want to get rid of Miller? By firing him before April 1, the university was on the hook for the full amount of Miller’s buyout. According to the Indianapolis Star, had the school made this move in just over two weeks, Miller would have been owed 50 percent of the remaining income on his contract.

Maybe the full buyout is a “thank you for your service” gesture. Or supporters of Indiana basketball didn’t want to endure the 2021 NCAA Tournament taking place entirely in their state without the region’s most celebrated program. That has to sting.

Indiana finished 12-15 this past season (7-12 in the Big Ten), losing six consecutive games to end the campaign. The final of those losses was a 61-50 defeat to Rutgers in the Big Ten Tournament.

Miller came to Bloomington after a successful six-season tenure at Dayton, where he led the Flyers to four NCAA Tournaments (including a run to the Elite Eight in 2014) and two first-place finishes in the Atlantic 10. Prior to replacing Tom Crean at Indiana, Miller compiled a 139-68 record at Dayton and appeared ready to take the next step in his career at a Power 5 program.

In his four seasons leading the Hoosiers, Miller compiled a 67-58 record (33-43 in conference) and never finished above .500 in the Big Ten. As mentioned, Indiana never made the NCAA Tournament under Miller, only settling for an NIT bid in 2019. The Hoosiers won two games in that tournament before losing to Wichita State 73-63, in the quarterfinals.

The question will now become who replaces Miller on the Assembly Hall sideline. The moon shot would be Boston Celtics coach Brad Stevens, an Indiana native who was enormously successful in six seasons at Butler, leading the Bulldogs to five NCAA Tournaments and two consecutive national championship games.

Is Indiana a better job than Baylor right now? Would Scott Drew be interested in returning to the state after going to college at Butler and coaching Valparaiso? But after 18 seasons in Waco, Drew has built Baylor into a powerhouse and No. 1 seed in this year’s NCAA Tournament. Maybe he’s done all he can at Baylor, but is it worth leaving for a restoration project?

Former Michigan coach John Beilein could be the most viable candidate. He’s available after resigning from the Cleveland Cavaliers last season. Beilein’s 12 seasons at Michigan showed he can succeed in the Big Ten and do so without attracting top recruits. But at 68 years old, he might not be suited toward a long run at Indiana.