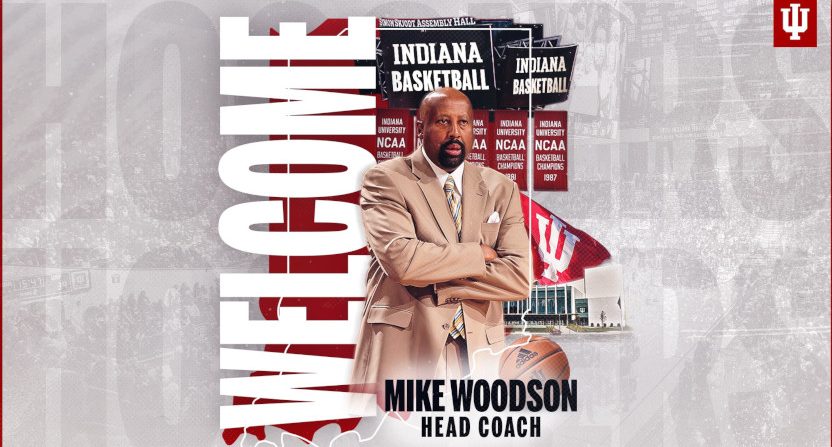 After firing Archie Miller (and paying him a buyout of $10.3 million), the Indiana Hoosiers’ men’s basketball team has settled on their new coach, tapping former Hoosiers’ player and long-time NBA coach Mike Woodson. Numerous reports of the team targeting Woodson emerged Sunday, followed by firm reports that he’d signed and then an official announcement from the school. Here’s some of how that unfolded:

Hearing that former #iubb star & Knicks and Hawks assistant coach Mike Woodson has emerged as the frontrunner to be the next Indiana basketball coach.

Sources: Indiana is attempting to finalize a deal to hire Mike Woodson as its next head basketball coach. Nothing has been completed, but the two sides are working towards a deal.

If Woodson winds up getting this deal done, he had better hire a killer coaching staff … https://t.co/DuLrNbCZkV

Mike Woodson had been a name constantly buzzing for the Indiana job since it opened. Indianapolis native, Indiana alum. Hoosiers made some runs at other candidates, but there was a belief Indiana was intrigued by what Michigan has done under Juwan Howard. Staff will be key.

Woodson, 63, played for Indiana from 1976-80 while Bob Knight was coaching there, helping them to a 1979 NIT title, a 1980 Big Ten championship, and a 1980 Sweet Sixteen appearance. He then played in the NBA from 1980-91, then began his NBA coaching career as an assistant with the Milwaukee Bucks in 1996. He’s spent 20 total seasons as a NBA coach, including six seasons as a head coach with the Atlanta Hawks (2004-10) and two and a half as a head coach with the New York Knicks (2012-2014). But he doesn’t have any college coaching experience, which is why many pointed out that his staff will be key in recruiting and in adjusting to that level. And, as Gregg Doyel of The Indianapolis Star reported, there’s already one prominent name that will be supporting Woodson, former Butler and Ohio State head coach Thad Matta:

IU is hiring former Butler and Ohio State coach Thad Matta as associate AD for men's basketball administration. Matta will assist an IU staff that will be led by new coach Mike Woodson.

We’ll see how this move works out for Indiana and Woodson. As TCB’s Michael Grant noted earlier this month, the Hoosiers have hit some rough patches since the dismissal of Kelvin Sampson amidst NCAA scandal in February 2008; Tom Crean did lead them to three Sweet Sixteen appearances in a five-year span, but many felt his teams underachieved, and Indiana fired him after missing the 2017 NCAA tournament. They then hired Miller, who never made a NCAA tournament in his four years at the helm. So there’s a long way back for them to go, and we’ll see how Woodson does in getting them there.