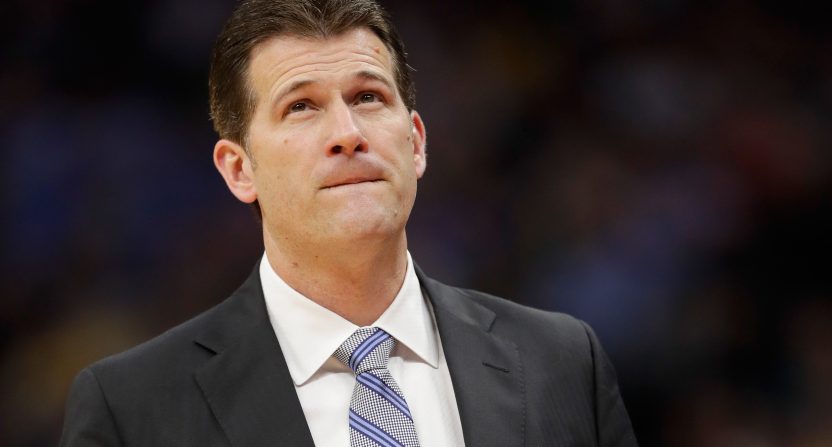 All last week, the Steve Alford-to-Indiana smoke was thick and billowing.

Anyone reading those particular tea leaves would have come away with the idea that Steve Alford was the guy. After all, who else checked all three of those boxes? Even Brad Stevens, the pipe-dream hire for plenty of Indiana fans, only fit two of those bills.

Combined with Glass’s stated desires in a candidate, there was also an absolutely overwhelming amount of chatter.

Dickie V got into the act, even:

What time is the press conf. next week @ IU ?STEVE ALFORD will come home where he was Mr Basketball & led IU 2 title in 87! @GreggDoyelStar

And then, after UCLA’s disappointing loss to Kentucky in the Sweet 16 on Friday, Steve Alford gave a fairly emphatic denial that he was interested. Alford then told ESPN’s Jeff Goodman he was 100 percent staying at UCLA.

Woj and Pat Forde included this nugget about Alford:

“Friday night, UCLA coach and Indiana alum Steve Alford said he was “100 percent not going to Indiana.” It’s unclear whether Miller was the first choice at IU before Alford, or whether Alford declined interest in the job and Miller was the next option.”

So what’s the truth here? How could there be so much chatter, if nothing was actually happening? And why would Indiana not want to bring back a guy like Steve Alford? Well, a few very good reasons, actually.

But first, was he considered? Reports like this have started to trickle out:

Encouraging to hear from Indiana source that Alford was "never in the mix." "Too much controversy, too many important people opposed."

That controversy likely stems from a few different areas. While at Iowa, Steve Alford totally mishandled the Pierre Pierce sexual assault investigation. Ben Raphel broke the whole thing down over at the Crimson Quarry, and said just about everything I’d have said. Here’s Alford’s reaction the day after his player was accused of felony sexual assault:

That same day, Alford vigorously defended his accused player, saying that he “supported him 100 percent,” In the same article, Alford spent time discussing his own successes with the team, and indicated that journalists should spend more more time talking about what the team — and specifically he — had accomplished, claiming that “Nobody writes about the fact that we have three players in Dean (Oliver), Luke (Recker) and Reggie (Evans) in NBA camps right now.”

This wasn’t a one-time defense, or one-time comment. Alford launched a campaign for one of his freshman stars in Pierce, well prior to the legal case’s resolution.

Yikes. That incident still follows Alford, as it should, especially considering Pierce ended up assaulting another woman after being reinstated to the team. (Alford didn’t actually apologize for his handling of the Pierce case until 2013, and only then after being forced to upon taking the UCLA job.)

Whether Indiana’s unease with that controversy stemmed from fear of bad optics or genuine compassion for victims of sexual assault is impossible to say, but regardless of process, the result was the right one.

Though the Pierce case should have been enough to disqualify Alford on its own, there are actually two more big reasons why Indiana was smart to stay away.

First, it’s unclear as to whether he can actually be a successful coach at an elite program. He’s never been past the Sweet 16 despite 18 seasons spent at Iowa, New Mexico, and UCLA. He’s seemingly a solid coach, but is that enough? Haven’t we seen exactly what Alford is, at this point? How could Indiana cite a desire to compete for national championships and regular Final Fours and then hire Steve Alford, a coach who’s never sniffed either?

And finally, there’s the Bob Knight factor. There is a vocal minority of Indiana basketball fans who just want things to go back to the way they used to be. (I’m speaking of basketball, here, although there’s probably plenty of overlap, too.) Steve Alford, to them, represents a connection to the Bob Knight-era, and despite the myriad of evidence to the contrary, they still believe Indiana can be exactly what it once was.

The key, of course, is to bridge that gap, and maybe, just maybe, bring Knight himself back into the fold in some capacity, even just ceremonially. A hire of Alford would have been safe, in some respects, because Glass would have been giving those people exactly what they wanted.

But it would have also been caving to the whims of a group of fans Indiana should not be listening to. Indiana’s fans have spent the better part of three decades trying to move backwards in time. When Fred Glass introduces Archie Miller today as the next coach at Indiana, he’ll be taking a big step forward instead.