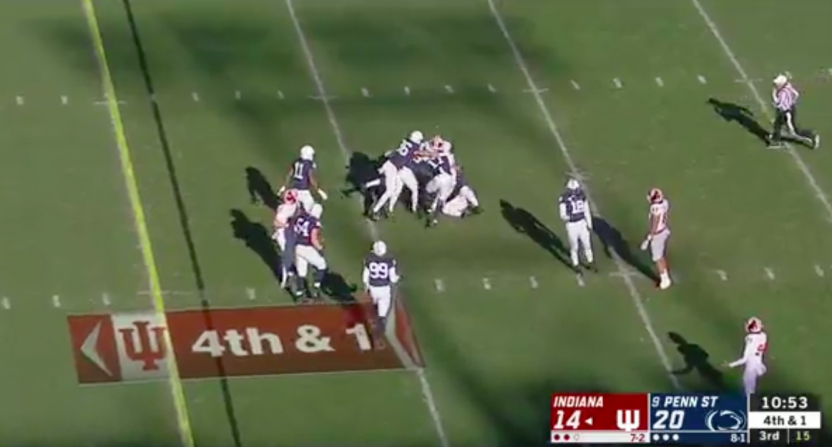 We’ve seen a lot of bad fake punts in our day. Try as they might, college football coaches and players never seem to learn their lessons and consistently provide us with pitiful fake punt material.

Let’s add today’s fake punt attempt…if we can call it that, by the newly ranked Indiana Hoosiers against the Penn State Nittany Lions.

Down 20-14  in the third quarter and with the ball on their own 44-yard-line on 4th and 1, the Hoosiers decided to punt it away and hope their defense could withstand Penn State a little while longer. Or at least so we thought. Or maybe not? It’s really hard to tell exactly what the plan was. The ball is snapped and the personal protector lined up in front of the punter seems to think about letting the ball go past him but then reaches out and grabs it at the last second. He also bobbles the ball and turns away from the line of scrimmage, so that by the time he’s ready to start moving, there are about five Penn State defenders already in his face ready to tackle him for a loss.

It looked as bad as it sounded. And keep in mind that Indiana burned a timeout in order to draw something up and this is what they came up with.

Trailing 20-14 in the 3rd quarter, @IndianaFootball lined up to punt, then went for it but failed.

Two plays later, @PennStateFball punched it in to lead 27-14. pic.twitter.com/g90MEaa7aA

As if being punished for their insolence, Indiana then let up a 35-yard touchdown run to Journey Brown two plays later, giving Penn State a 27-14 lead.

The fact that this isn't the worst fake punt an Indiana football team tried this decade speaks volumes pic.twitter.com/7o8xqq1CN7