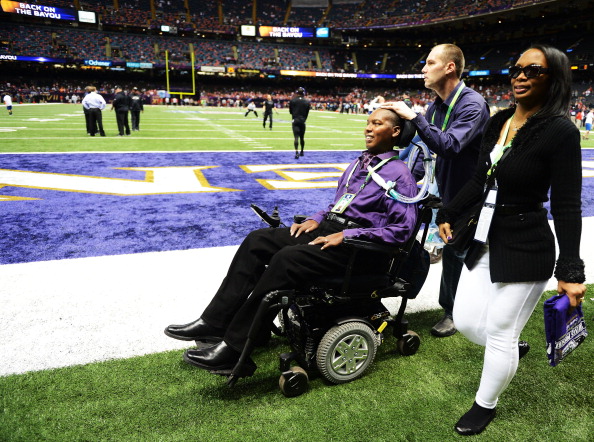 The NCAA has handed out Inspiration Awards to current or former athletes, coaches and executives each year since 2002, and they picked a couple of excellent ones for 2016. The award is given to someone who “when confronted with a life-altering situation used perseverance, dedication and determination to overcome the event and now serves as a role model to give hope and inspiration to others in similar situations,” and the organization chose two fantastic people who perfectly represent that this year. This time around, they’ve picked former Mount St. Joseph’s basketball player Lauren Hill and former Rice football player O.J. Brigance.

Hill’s story will be familiar to many, as she was diagnosed with an inoperable brain tumor in 2013 and still managed to play college basketball in 2014. She took her struggle public and created a foundation to raise money for research into Diffuse Intrinsic Pontine Glioma (DIPG), the rare  form of inoperable brain cancer she had; Layup4Lauren has raised over $1.7 million to date. Here’s what she said at the one NCAA game she played about why she took her struggle public:

“When I was diagnosed I remember kind of feeling lonely because nobody understood. And now that more people know about this story and the awareness of DIPG. I’m so happy that people know about it now and that we can get some research going and hopefully find that home run cure for cancer,” Lauren said.

“And even though I’m probably not going to be around to see it, it’s going to help a lot of people. And that’s why we need to keep staying with this and not end it with this game, and keep supporting research.”

Hill passed away April 10, 2015, but her story lives on; she was posthumously honoured at the ESPYs this year. It’s smart of the NCAA to spotlight her here, and to raise awareness of one of the most inspirational NCAA athletes in recent years.

Brigance’s NCAA days were longer ago, as he played football for Rice from 1989 to 1991. He didn’t get much interest from most Division I schools despite being named the First Team All-State center in Texas thanks to his 190-pound frame, but was recruited by the Owls as a linebacker, which he hadn’t played since before his junior year in high school (they switched him to centre thanks to a need there). He left after his junior year at Rice as the school’s all-time leading tackler, went undrafted by the NFL, had a great CFL career from 1991 to 1995 (including winning the only Grey Cup ever won by a U.S. team in 1995), and then did well in the NFL from 1996 to 2002 with Miami, Baltimore (where he won the Super Bowl in 2001), St. Louis and New England.

It’s his post-career story that many know him for, though. Brigance was diagnosed with amyotrophic lateral sclerosis (ALS, or “Lou Gehrig’s Disease”) in 2007 while working in the Ravens’ front office. ALS is a disease that kills neurons, harming movement, talking and breathing, and the average survival is only for three to four years after diagnosis. Brigance has beaten those odds, and used his platform to do huge things to help others battling ALS. The Brigance Brigade Foundation that he and his wife Chanda founded with help from friends Bonnie Downing and Mike Gathagan in 2008 works to boost the quality of life of those with ALS and their families “by providing access to needed equipment, resource guidance and support services,” and it’s been key to helping a ton of affected people.

Despite being confined to a wheelchair, unable to move his limbs, and only being able to speak through a DynaVox device, Brigance has also continued to work with the Ravens, and he was featured in a number of pieces ahead of their 2013 Super Bowl win.  In his terrific autobiography “Strength of a Champion” (co-written with Fox’s Peter Schrager), Brigance talks about why he chose to start the foundation and why he feels his battle with ALS gives him a platform for change.

“Chanda and I had a mission in mind when we started the Brigade. We wanted to improve the quality of life for ALS patiens and their families by doing whatever we could to provide necessary equipment, resource guidance, and support services. We were fortunate enough to have the medical care and resources we needed to face the disease head-on. Now we needed to do everything in our power to help others do the same. …

In the weeks after both [media pieces from 2008] ran, I received hundreds of e-mails and letters from individuals impacted by my words. I heard from families battling ALS from states all over the country, thanking me for my courage and the inspiration I provided them. I got one e-mail from a man in England. He wrote to tell me how much the NFL piece helped him. He had lost his 15-year-old daughter that year and he didn’t know how he was going to live the rest of his life without her. After seeing the feature and how I’d chosen to live my life in spite of ALS with the help of Jesus, he was encouraged to go on.

This was it. ALS provided me with an opportunity to really make a difference. Through my struggle and our work with the Brigance Brigade, Chanda and I discovered that we could truly change lives. This was my true calling.”