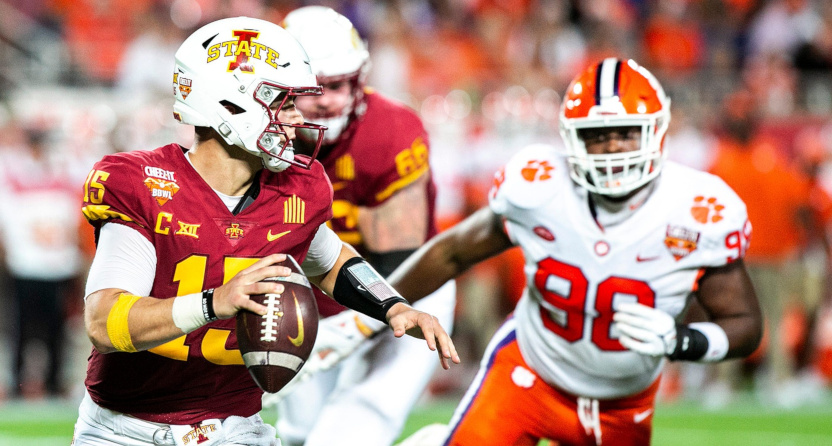 Wednesday’s Cheez-It Bowl in Orlando between the Iowa State Cyclones and the Clemson Tigers was only 6-3 at the half, but the second half saw a whole lot of remarkable events. On their first drive of the half (following an opening drive from the Cyclones that ended in a punt), the Tigers went 79 yards in 7:39 for the game’s first touchdown, then got another touchdown on the next drive when Iowa State quarterback Brock Purdy tried to volleyball spike a tipped pass forward, only for it to be intercepted by Clemson cornerback Mario Goodrich and returned for six.

The Cyclones kept fighting, though, adding a touchdown and a field goal in the fourth quarter. And they had a chance at a drive to tie it late after getting the ball back down seven with just under two minutes left. But another miscue from Purdy would eventually cancel that.Running on fourth and two from his own 36 with 33 seconds left, Purdy (seen above running from Clemson’s Darnell Jefferies earlier in the game) made it past the first-down marker, which would have extended the game. But Goodrich made an amazing play to force a fumble, knocking the ball back behind the first-down line in the process. Purdy then recovered the ball himself, but couldn’t advance past the first-down marker. That meant a game-ending turnover, and that gave the Tigers the 20-13 win.

We mean The Cheez-It Bowl couldn’t end any other way. A run to pick up the first down on fourth down but then a forced fumble causes the ball to go back behind the first down line…and they fail to get the first down. https://t.co/w7wKYadB1J

That’s an awful way for Purdy, a senior, to end his Iowa State career. But it did lead to a well-deserved MVP trophy for Goodrich, also a senior, and it was a great cap to his career:

And your MVP of the game: @_MG3__ with a pick six and forced fumble at the end. #CheezItBowl #ALLIN #Clemson pic.twitter.com/HkVpoiZ5fa

Mario Goodrich, the game's MVP: "It means a lot for everyone on this team. We started out 2-2 and to rally back to get 10 wins is amazing. .. It’s amazing to finish my last game with these guys."

And it did lead to a Cheez-It shower for Clemson coach Dabo Swinney:

DABO GOT THE CHEEZIT BATH pic.twitter.com/eH3G5tBpfh

The key question here is if Cheez-Its can stain an already-orange shirt. We’ll find out when Swinney does his laundry. But he and Clemson did wind up on top, and got all the Cheez-Its as a result. And Purdy’s fumble was the final thing that clinched that.