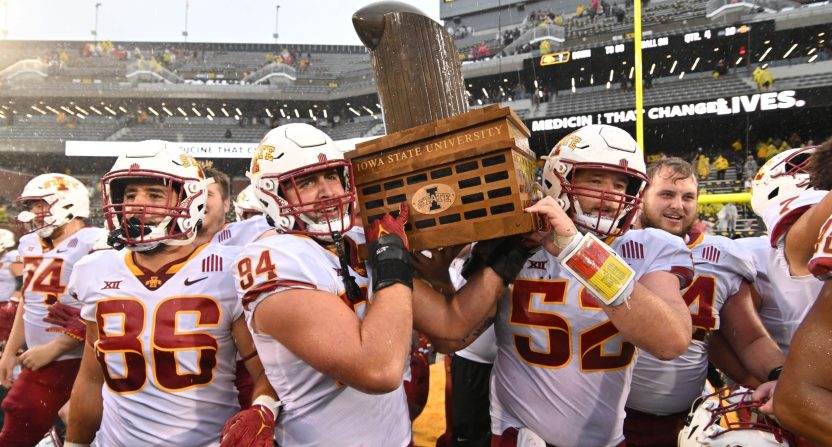 This year’s showdown between the Iowa Hawkeyes and Iowa State Cyclones lived up to the “hype” thanks to a low-scoring affair full of baffling decisions, poor play, and absurd mistakes. Just like the college football world wanted.

The Cy-Hawk game has been dubbed by many fans as “El Assico” as a heated rivalry that tends to feature games lacking much fanfare, excitement, or pleasure for either fanbase. This year’s game was a classic example of all of that.

Iowa, which won 7-3 last week without scoring a touchdown, finally found a way into the endzone to score seven points the old-fashioned way.

However, in classic El Assico fashion, that was all the scoring they’d do on the day. Both teams traded brutal fumbles at the goal line and it appeared that neither one would score another touchdown all day as they combined for six total turnovers.

Iowa State put the ball in the endzone, but not in the way they wanted. pic.twitter.com/pZoqG8vzsw

From there, things got really weird, which we should have known when we saw a fan in the stands wearing Iowa State gear under his Iowa hoodie for some reason.

Eventually, Iowa State figured things out and churned out a 99-yard drive in the fourth quarter that ate up almost 12 minutes and culminated in an 8-yard touchdown pass to put the Cyclones up 10-7. Iowa had a chance to send the game to overtime but, of course, it was missed.

Iowa misses a field goal at the end of regulation and Iowa State wins #ElAssico 10-7! pic.twitter.com/o2UPFex4xH

Iowa State notched their first road win in the in-state rivalry since 2014 and the game lived up to the El Assico reputation, much to the delight of college football fans.

Iowa-Iowa State is a reminder that bad NFL football is really bad, but bad CFB is incredible.

Iowa State finally did it. Ames might run out of Busch Light tonight.

El Assico was disgusting. I loved every second of it.