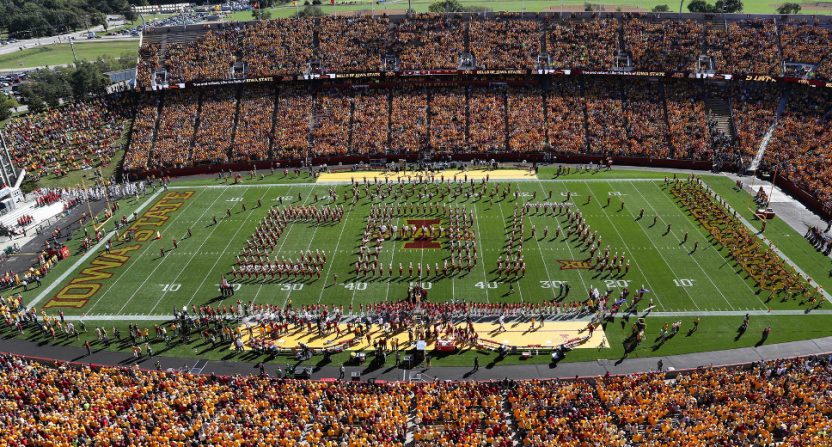 On Monday, former Iowa State golfer Celia Barquín Arozamena was found dead on a golf course in Ames, Iowa, with 22-year-old man Collin Daniel Richards charged with her murder later that day. The 22-year-old Barquín Arozamena won the European Ladies Amateur Championship in July, and she was the 2018 Big 12 champion and Iowa State’s female athlete of the year. The Cyclones had planned to honor her for the latter award during Saturday’s football game against Akron. Instead, they turned the game into a tribute to her, having fans wear yellow and honoring her with the band spelling out her initials, a videoboard tribute and a moment of silence:

Iowa State honored slain former golfer Celia Barquin Arozamena in a ceremony prior to Saturday's game with the band forming her initials and with a video tribute. pic.twitter.com/UXzW84Sy3J

Here’s a look at the stadium, with many fans following the request to wear yellow (one of Iowa State’s main colors, but also Barquín Arozamena’s favorite color, and a tribute to her Spanish roots), and many donning golf shirts:

And fans in the stands had plenty of signs in memory of her too:

Other Iowa State teams and other Big 12 teams also honored her this week:

The #Cyclonitas are back in action this afternoon playing a doubleheader against @BadgerSoftball Today we will be wearing yellow uniforms & helmet decals in honor of the late Celia Barquin Arozamena 🌪💛🌪💛 pic.twitter.com/8BtPu4RzcK

We’ve named Celia Barquin Arozamena an honorary team captain. The team will wear these captain’s sleeves and patches this season in her memory.#CyclONEfamily #Cyclonitas pic.twitter.com/DqbHfcFxaR

Tonight we play in honor of @CycloneWGOLF and Celia Barquin Arozamena. pic.twitter.com/0sEywqkxq5

Today we celebrate the life of Celia Barquin Arouzamena and stand with the entire @IowaStateU community by turning cardinal and gold in celebration of her life from 8 a.m. to 8 p.m. We ask you, Baylor family, to change your Twitter profile picture in support. #Big12Family #CBA pic.twitter.com/9hC5tAy9dL

Heartbroken over what happened to #CeliaBarquinArozamena I had the pleasure of meeting her and I know she was a special person. Sending my thoughts and prayers to her family and loved ones in this difficult time

Thank you @TheSergioGarcia for your kind words. This was one of her favorite photos. #GolfFamily pic.twitter.com/ehqvRS2tk3

This is a heartbreaking story, but it is impressive to see all the schools and teams that have come together to pay tribute to Barquín Arozamena. She clearly made an impact on many at Iowa State and beyond, and she’ll long be remembered.