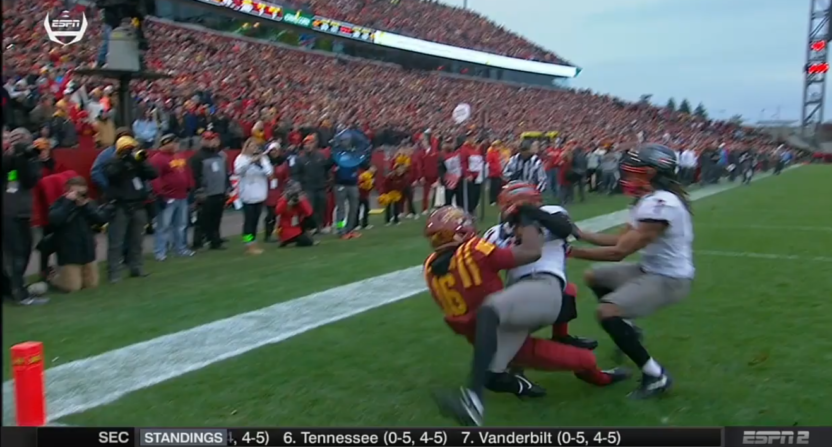 Iowa State and Oklahoma State played an incredibly entertaining game in Ames, as long as you don’t require a lot of stingy defense in your football recipe. (Sorry, Big Ten fans.)

Down a score late, Iowa State was driving the field, having already converted a 4th and 14 to stay alive. Facing 2nd and goal from inside the five yard line, the Cyclones called for a fade route. Never the wisest call, but a common one nonetheless.

On first glance, it did look like an interception for Oklahoma State corner A.J. Green. Replays from other angles were a bit less conclusive, however, despite what Mike Patrick and Tommy Tuberville apparently viewed as an open-and-shut case for an interception:

And the end of this clip has perhaps the best angle of all:

Based on this shot here, it sure looks like ISU receiver Marchie Murdock (A+ college football name) ended up pinning the ball against the defenders chest himself, with more control while both players were still in the air coming down: 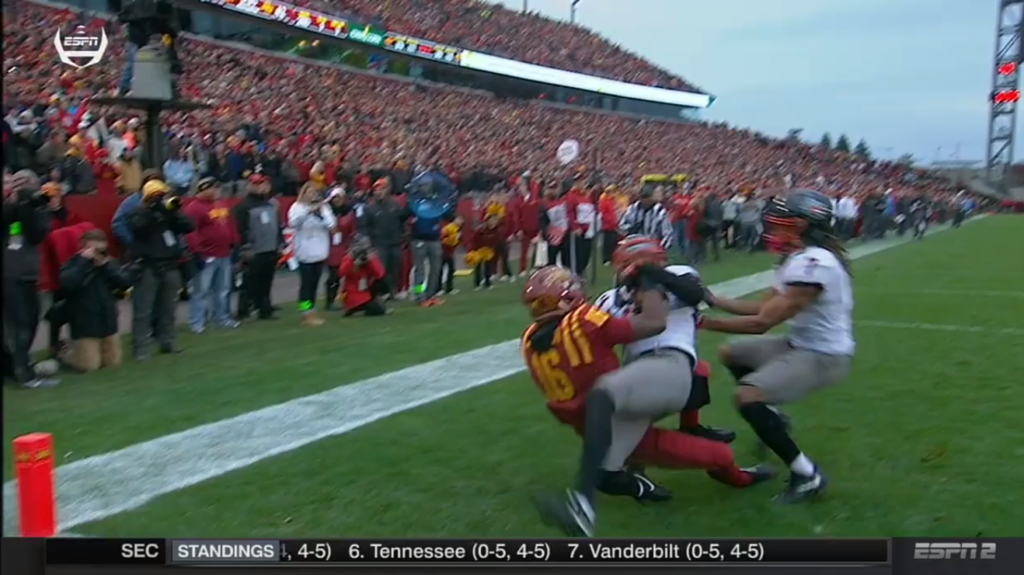 They then rolled around for a bit, with Murdock seemingly ending up with more complete control, before Green flipped it out of his hands and the ball bounced away. Based on that evidence, this looks more like a catch, based on the simultaneous possession ruling:

The receiver and defender both go airborne and simultaneously gain possession of a legal forward pass near the goal line and return to the ground where:

Situation 2: they alight in the end zone with the ball;

Situation 2: It is a touchdown.

And it has nothing to do with who first had their hand on the ball, because as noted here, touching the football does not mean possession.

If we’re splitting hairs on one player “touching” the ball a split second before the other player, then remember this … touching is not possession. Possession of a pass, a kick or any other loose ball, in this case a fumble, requires three components:

1)  Control of the football

3)  Do you have time to make a football type move or do something common to the game?

This makes sense; if it did, every deflected pass would be an interception and a fumble. If anything, possession on this play looked more clearly in favor of Iowa State, but it was ruled an interception and a touchback on the field, and then the replay review confirmed the call, rather than merely upholding it.

That means someone, somewhere, saw that play and decided it was definitive proof of an interception.