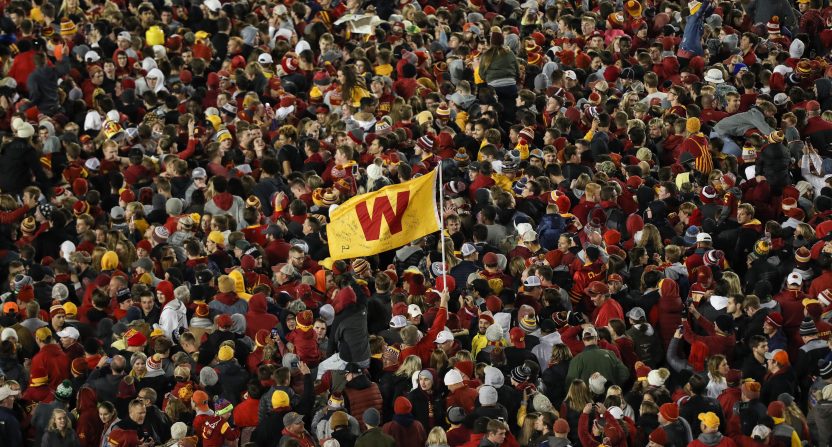 If you thought Iowa State’s slow start to the season meant that last year’s big wins were just a flash in the pan, you were wrong. The Cyclones, behind third-string quarterback Brock Purdy, upset previously-undefeated West Virginia on Saturday night.

Last season, Iowa State beat two top five Big 12 teams. The Cyclones knocked off both Oklahoma and TCU, each of whom was undefeated at the time. Kyle Kempt led the Cyclones to both wins, though former quarterback Joel Lanning played a major part as well. Kempt only started those games because Jacob Park went on medical leave during the week of the Oklahoma game. It was the first start of Kempt’s career, but he kept the job ever since.

This year, Kempt went down with an MCL injury during the season-opening game against Iowa. (The game was not supposed to be the first of the season, but the matchup with South Dakota State was canceled due to weather.) The Cyclone offense has struggled since then under Zeb Noland. Noland actually put up decent numbers, but Iowa State failed to score points.

Which brings the Cyclones to third-string quarterback Brock Purdy. Under Purdy’s leadership, the offense has been strong the last two years. He led the Cyclones to a big win over Oklahoma State last week, and to a bigger win this week over West Virginia.

The Cyclones started a little slow, punting and turning the ball over in their first two drives. After West Virginia took a 7-0 lead, though, Purdy took over. The Cyclones scored touchdowns on three consecutive drives and took a 20-14 lead into halftime. Also, the Cyclone defense took over, completely stopping Will Grier and his Heisman campaign. After that opening touchdown drive, West Virginia’s only points came on a blocked field goal returned for a touchdown.

The Mountaineers could do nothing on offense in the second half, gaining just 20 yards. Iowa controlled the pace of play and the line of scrimmage, and never let West Virginia back into the game.

Iowa State is here to stay

If the hype for Matt Campbell as one of the country’s best coaches died down after Iowa State’s 1-3 start, it should return with a vengeance now. This is the third undefeated top 10 team that he has upset within the last two seasons. He’s done it with backup quarterbacks and intense defense. The #MACtion coach from Toledo — who was hired for his offensive prowess, not his defense — has built a team that is stout on that side of the ball.

None of Iowa State’s losses this season look particularly bad, either. Ten-point losses to Iowa and Oklahoma, and a three-point loss to TCU, are nothing to sneeze at. Sure, it’s not what we’d expect from an elite team. But the fact that we expect Iowa State to be anywhere near that is a huge statement anyway.

The final score of this game doesn’t do justice to just how strong the Cyclones were. Iowa State dominated this game from start to finish. This team was just better, in all facets, than a team that came into the game ranked No. 6 in the country. Matt Campbell is building a heck of a program in Ames.

The question for Iowa State going forward — the ultimate question — is what they can do to keep Campbell as long as possible. Elite programs will be calling his name soon. How long can the Cyclones keep him? And what can the program do to ensure continued success once he eventually moves on.