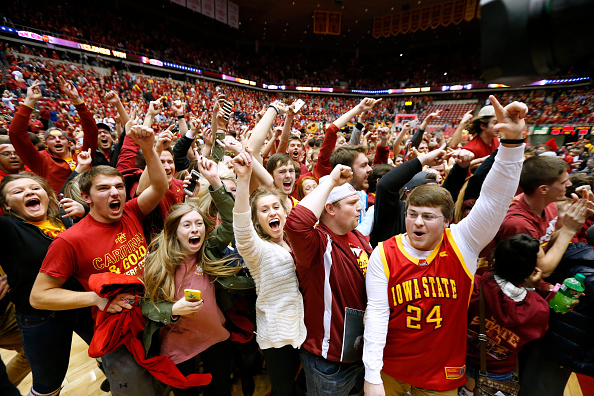 You buy a ticket. If you’re a student, maybe they are free. Your team wins a big game, comes from way behind to do so, and keeps an undefeated season alive against a hated cross-state rival. You’re happy. You’re more than happy. You’re elated. You’ve never felt this kind of joy at a sporting event. Maybe you’ve never felt that kind of joy anywhere. I mean, hell, you’re in Ames, Iowa.

Be happy. Be elated. Be full of joy. And do it in the stands. Do it in the parking lot outside Hilton Coliseum on the cold trek back to your dorms. Do it at the Applebees on Chestnut, or whatever bar will let you celebrate the amazing win your team had over Iowa on Thursday night. Do not do it on the court.

Still wearing his press pass. What a trooper. pic.twitter.com/2icaPNWkNo

That is Randy Peterson, the Des Moines Register’s columnist for Iowa State sports. Peterson is in the hospital after suffering a compound leg fracture during the melee that ensued after fourth-ranked Iowa State beat rival Iowa. Unranked Iowa. If there was an “act like you’ve been there before” moment in sports, this was it, but fans all over the country feel it like it’s their right to act like this, regardless of whether they have or not. Storming the court for regular-season wins over teams your school is supposed to beat has become a regular occurrence in college basketball, and it’s always, constantly, a danger to the players, the coaches, and those working the game.

This is unacceptable, and there is no reason for it to continue. Not after last night.

What a finish in Ames! Iowa blows 6-point lead in final minute as No. 4 Iowa State hits a winner w/ 10 seconds left. pic.twitter.com/02IMI7VTAU

Here’s why: coaches love it.

When I worked at a major college we had one of the most memorable field (not court) stormings in the recent history of college football. The video was played over and over again for recruits. We used the images from every angle on almost every page of our media guide and game programs. COME BE A PART OF THIS EXCITEMENT, FIVE STAR RECRUIT. THIS IS THE PLACE TO BE.

That is, unless you’re under the pile. From the Des Moines Register:

“I hate that Randy got hurt,” Iowa State coach Steve Prohm said. “That’s terrible. But, my thing, I was trying to go see my wife, to be honest with you. It was a great moment. That’s part of college basketball. There’s a picture of when they beat Michigan a couple years ago here. … They beat Michigan and everybody rushed the floor.”

When asked if he thought Peterson’s injury could be used as an example of the dangers of court-storming, Prohm added: “That’s not my decision. That’s part of college athletics. That’s a great moment. Those college kids … they’ve been camping out here (for tickets) for three days. There’s only probably 10 schools that do that in the country. Give them their 15 or 20 minutes to do that. I thought it was pretty cool. I probably should have enjoyed it more, but I was just thanking God I didn’t have to come to this media session my first year and answer questions on why I lost to Iowa.”

This wasn’t the first major injury during a court storming, and it won’t be the last, mainly because people like Prohm need that kind of atmosphere to convince top-rated players to come to Ames freaking Iowa in the first place. There is literally no reason to be in Ames, Iowa other than the basketball team right now, so if Prohm can show recruits an environment like that to be a part of, who wouldn’t want to come there? “That place was so crazy some old dude broke his leg!” And if you think people aren’t saying that today like it’s a positive, you’re nuts.

Some conferences have banned the practice of storming the court for this exact reason. And you know what? Their fans enjoy victories just as much from the stands, or the concourse, or the Applebees down the block, as those who think they are entitled to run onto the court after a victory because they have a ticket to the game.

Remember the old cliche every marketing guru used to use to sell season tickets? “We sell you the whole seat, but you’ll only need the edge.” A ticket to a game—any game—entitles the holder to access to the facility, which includes all common areas and their assigned seat. Nowhere in the history of ticketed sporting events does buying a pass to the game entitle fans to enter the playing surface while the game is going on. Why, then, is it okay immediately after? Because of the optics?

I understand the passion. I get the desire to be a part of a celebration and be as close to the players as possible. I’ve been there, on the field for football stormings and in the press box, thankfully, for basketball stormings. It’s amazing, until someone gets hurt.

Last night, in Ames, someone got very hurt. It happens too often, especially in the confines of a basketball gym, which are ill-equipped to handle that kind of rush from the crowd onto the playing surface. It seems like every time fans rush the court, something bad happens, and yet it doesn’t stop schools from letting it happen again and again.

It was an amazing visual in Hilton last night. Let’s make that one the last.