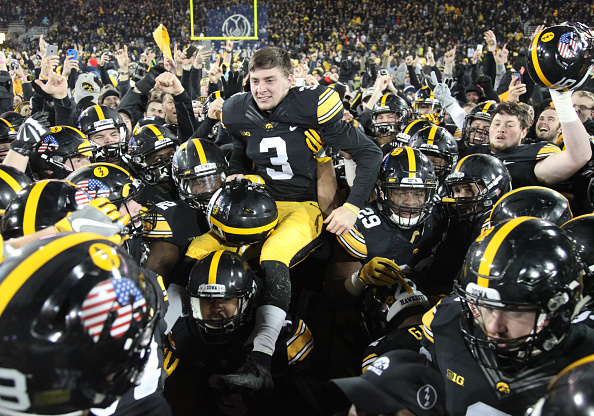 Dress up as Kinnick Stadium for Halloween, and you’ll forever get candy in Columbus, East Lansing, and Happy Valley, kids.

Iowa stunned third-ranked Michigan, 14-13 on a field goal as time ran out and buried the field with black and yellow-clad hysterical fans, throwing college football and the Big Ten West into utter upheaval.

It’s Michigan’s fourth loss in the last five trips to Kinnick, and it was easily the most meaningful.

In spite of completing a staggeringly sad three passes in the second half, Iowa was able to overcome the complete ineptitude of the Michigan offense and benefit from a few stupid penalties to have a shot to win. The Wolverines managed a depressing 201 TOTAL yards … which were only 29 fewer than what Iowa was able to get.

Michigan quarterback Wilton Speight flopped in the team’s first real, scalding road test. That’s not to take away from the previous wins, but Iowa represented the toughest team they’d visited on the schedule to date. Rutgers is brutally bad, and Michigan State, though a rivalry game, wasn’t up to snuff in 2016.

What happened was that Michigan cracked, and somehow, cracked open a door for Penn State to play for a Big Ten title.

If the Wolverines win next week against Indiana and lose at Ohio State, coupled with the Nittany Lions winning their last two, Penn State represents the rugged Big Ten East in the title game. That’s unfathomable, but hell, it’s college football and this is where we are.

The honest truth is that Michigan rode an offense without an identity that relied a bit too much on not making the passing game make plays to win up to this point, and Iowa did the dirty work of making Michigan use the passing game to win.

Speight was 11-26 and underthrew Amara Darboh twice, horribly, on plays that would have produced at worst, long gains into field goal range. The Wolverines needed a 51-yard-field goal just to take the lead.

And the special teams … oh, the special teams. The Wolverines were goosed for a safety after an Iowa punt inside their own five, and that was a victory compared to the previous Iowa possession, where they ran into the kicker twice and gave the Hawkeyes a first down on third and 10.

The bottom line to it all is that Michigan isn’t out of the playoff race yet, but this is a massive body blow that few saw coming. Michigan was exposed as a team with a great defense and a massively flawed offense, and now they have one loss.

The house of horrors rolls on.