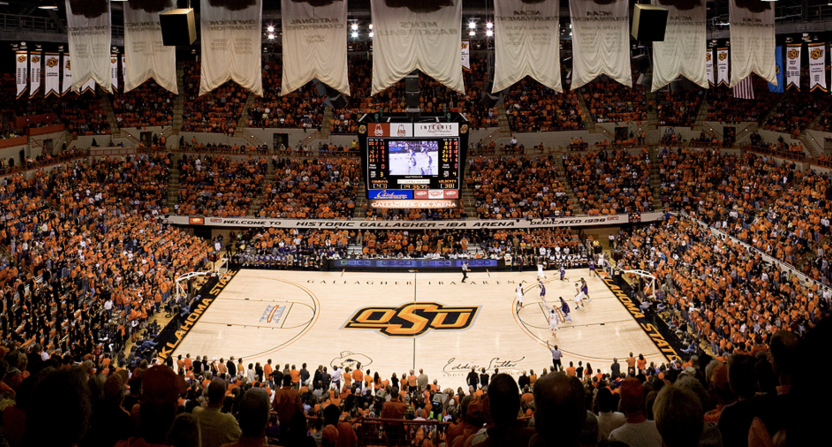 It seemed like an eternity ago that the FBI was investigating college basketball coaches for accepting bribes. Rick Pitino was fired from Louisville in 2017, and the FBI has arrested various assistant coaches, but the NCAA hasn’t really penalized a school for this. Until now.

According to ESPN, the NCAA has notified Oklahoma State University of a Level I violation which results in a one-year postseason ban for the men’s basketball team. This was due to then-associate head coach Lamont Evans “accepting between $18,150 and $22,000 in bribes to steer players from South Carolina and Oklahoma State to certain agents and financial advisors.” Evans was convicted to three months in prison last June.

Further penalties for Oklahoma State include three fewer scholarships each year for the next two years and a self-imposed $10k fine, plus one percent of their men’s basketball operating budget. Oklahoma State is planning to file an immediate appeal on the non-self-imposed penalties.

As for Evans, he was given a 10-year show-cause penalty which really limits his duties if anyone wanted to hire him as a coach.

Obviously, because violations were made, the NCAA had fair reason to penalize the school. But is giving a postseason ban to a school for things that took place years ago really a fair punishment?

This isn’t a rant against the NCAA. For once, they’re actually trying to do the appropriate thing. A men’s basketball team making the NCAA tournament can be highly lucrative for the school, and banning them for what they did hurts the school in the wallet and for future top recruits.

At the same time, Evans was accused of committing these violations from April 2016 to September 2017. And after learning about the violations, Oklahoma State fired Evans within a 72-hour span. In this passage from ESPN’s Mark Schlabach, the NCAA and Oklahoma State both agreed that Evans “acted alone” and OSU “didn’t benefit in recruiting.”

“The University is stunned by the severity of the penalties and strongly disagrees with them,” read a statement from the school. “The penalties do not align with the facts and are unfair and unjust. The NCAA agreed with OSU that Lamont Evans acted alone and for his own personal gain. Evans was terminated by OSU on Sept. 28, 2017, within 72 hours of learning of allegations against him.

“The NCAA also agreed that OSU did not benefit in recruiting, commit a recruiting violation, did not play an ineligible player, and did not display a lack of institutional control. As the report documents, OSU cooperated throughout the process, which lasted two years.”

Oklahoma State’s biggest penalty imposed by the NCAA is a one-year postseason ban. That means the vast majority of the players and staff will be paying for something done by a coach and players who aren’t there anymore.

The 2016-17 season was three seasons ago. Other than freshmen who are now seniors (with none of them being accused of anything), no other player was around or could have benefited from the situation. In addition, head coach Mike Boynton was an assistant coach back then, but the NCAA ruled Evans acted alone so Boynton wasn’t connected either.

This is the problem of a long investigation within the NCAA. If it takes too long, then the people making and benefitting from the violations are likely long gone, and those next in line are stuck dealing with the fallout when they had nothing to do with anything.

A long list of other schools have been a part of this investigation, and given Oklahoma State is the first to find out their punishment, there’s a chance other schools could see similar penalties. Arizona, Auburn, Creighton, Kansas, Louisville, LSU, NC State, South Carolina, TCU, and USC all either admitted to, declined to confirm, or are reported to be under investigation by the NCAA. If all of these schools receive some sort of ban, is next year’s tournament really going to be featuring the best of the best?

If the NCAA wants to hurt the school but not the players, let them play in the tournament, but don’t give them any postseason revenue. Then the school can still be financially punished, and the “student athletes” can still take part in the learning experience known as participating in a postseason tournament. Especially if it’s determined that the university was in the clear and took the appropriate steps. That would be a more nuanced and appropriate punishment than an outright postseason ban.