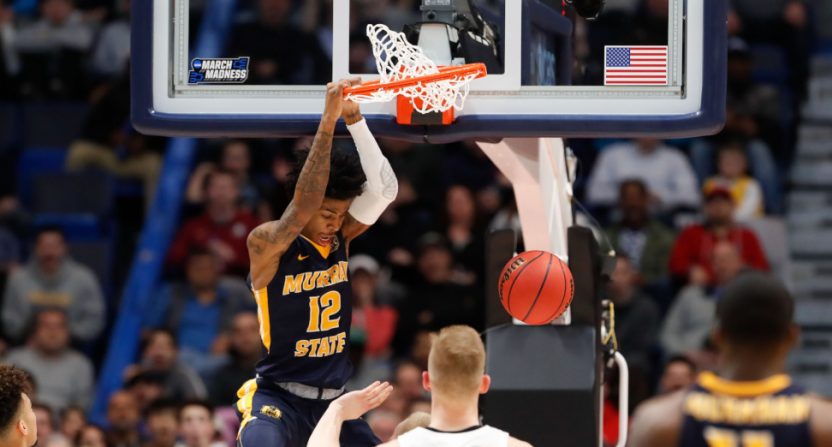 The lowest seed to advance in the NCAA men’s basketball tournament so far is the 12th-seeded Murray State Racers, who downed the fifth-seeded Marquette Golden Eagles 83-64 Thursday afternoon. And they did so thanks to a superlative performance from star Ja Morant, who’s been making plenty of waves this year, both as a NCAA player and a potential top-three NBA draft pick. Morant finished this first-round game with 17 points, 16 assists and 11 rebounds, marking the first triple-double in the NCAA tournament since 2012. Here’s a key first-half highlight from him, a crossover step-back three to end the half:

And here’s one of the remarkable assists he posted in the second half:

Morant’s final stat line was 17 points on five of nine shooting from the field, with two three-pointers and two of two foul shots. He also racked up those 16 assists and 11 rebounds, and joined an exclusive club in the process:

Ja Morant becomes the 8th player to record a triple-double in a NCAA tournament game.

He joins Shaq, Draymond and D-Wade … some great company 👏 pic.twitter.com/178syN4Xe6

Draymond Green was the last player to record a triple-double in the NCAA tournament, doing so for Michigan State in 2012 in their first-round win over LIU Brooklyn. Green also recorded one the previous year in a first-round tournament loss to UCLA. We’ll see if Morant can join him in the multiple triple-double club when the Racers are in action next; they’ll take on fourth seed Florida State Saturday.