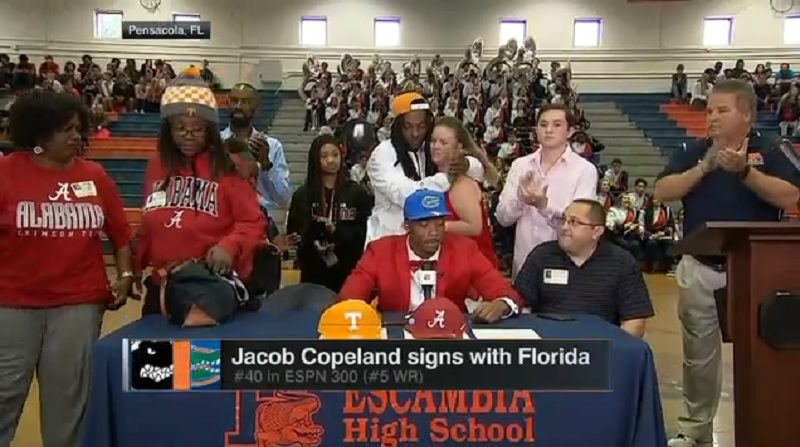 Wednesday was National Signing Day, the annual college football tradition where the nation’s best high school players decide where they’re going to ply their trade in college. It’s a day often full of intrigue, surprise picks, and weirdo fans getting way too worked up about the decisions that a 17-year-old stranger makes.

We’ve seen some crazy things over the years on NSD. Jersey and hat switcheroos have become commonplace as players try to one-up one another in their big moment. One of the most memorable was the time Landon Collins chose Alabama over LSU and his mom was not pleased. While her reaction was clear, that was nothing compared to how Jacob Copeland’s mom felt on Wednesday.

Copeland, a four-star wide receiver out of Pensacola, Florida, made his college selection on camera as so many bigtime prospects do these days. His decision would have a big effect on the SEC landscape. Considered one of 2018’s top 10 receiver recruits and the No. 14 overall recruit in the state, according to 247Sports, he received offers from all the major programs in the region, including Clemson, Tennessee, Florida, Alabama, and Auburn.

In front of him on the table sat three hats: one for Tennessee, one for Alabama, and one for Florida. Perhaps tipping her preferences just a little, his mother was sitting next to him wearing a Tennessee hat and an Alabama sweatshirt. So that’s what made it a bit surprising when Copeland reached forward and grabbed the Florida hat to confirm he’d be a Gator. And if you think you were surprised, check out how surprised mom was.

That is certainly a new one. When asked about why he picked the one school that his mother didn’t appear to be on board with, Copeland told ESPN, “I can’t go with my mom, I gotta go with my heart.”

Thankfully, what could have made for a very unfortunate story got turned around with a twist as mom later returned to congratulate her son on his college destination.

While these kinds of decisions might appear simple to outsiders, Copeland posted a tweet on Tuesday explaining just how much he agonized over the decision.

Throughout this entire recruiting process I never been as stressed as I am now. I cried and cried all last night about God leading me in the right directions. Now I don’t have over much as a day to decide on a school that’ll change my future after football. ?

Hopefully Copeland’s choice works out for him, and hopefully, his mom will be there in The Swamp to cheer him on.