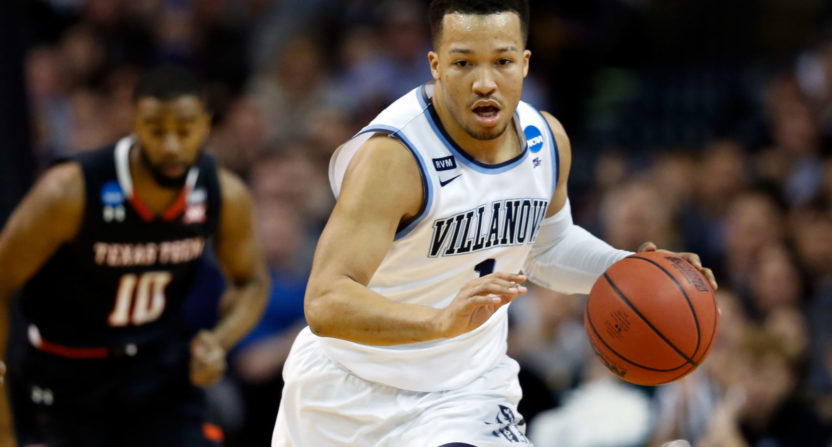 A couple years back, Villanova coach Jay Wright was running a drill on post defense when he gave the ball to 6-foot-2 point guard Jalen Brunson.

“We were watching him, and coaches, all of us just said, whoa, he’s the best post player we’ve seen in a long time with his footwork,” Wright said Sunday after his team beat Texas Tech, 71-59, to advance to the program’s second Final Four in three years. “He came to us with that.”

Of all the skills Jalen Brunson flashed over two games at the NCAA Tournament’s East Regional in Boston — the sharp passes, the shooting touch, the poised control of his team’s offense — none was quite as impressive as his post play. Again and again during Villanova’s Elite Eight victory, the junior point guard backed down a defender, inched his way toward the basket, then used either his vision or his footwork to create a shot for himself or a teammate. On one of the biggest possessions of the game, late in the second half, there was Brunson going to work down low on Keenan Evans for what was more or less a game-sealing bucket.

“It was like watching Magic Johnson back down,” Texas Tech coach Chris Beard said afterward.

Brunson’s surprising post presence is representative of his ability to truly do it all for the Wildcats, who enter this weekend’s Final Four as national title favorites. After the win over Texas Tech, Brunson was crowned the East Region’s Most Outstanding Player. Days later, the AP named him an All-American. He has already earned Big East Player of the Year honors, been declared a finalist for both the Naismith Award and Wooden Awards and emerged as the favorite for the Bob Cousy Award for the nation’s best point guard.

And by the way, his team stands two wins away from a national championship that would lock in his legacy as the most accomplished player in program history and his status as a true college basketball legend.

Brunson arrived at Villanova in the fall of 2015 as a five-star recruit with an NBA dad, but he was never destined to be a one-and-done star. As a freshman, he started at point guard and averaged 9.6 points per game for the national champion Wildcats but was largely overshadowed by veteran teammates Ryan Arcidiacono, Josh Hart, Daniel Ochefu and Kris Jenkins. On Jenkins’ fateful last-second shot that won the Wildcats the title, Brunson was not on the floor, having been benched for the red-hot Phil Booth.

Brunson took over Villanova’s offense as a sophomore and improved his numbers across the board, but it was the 2017-18 season that saw him emerge as a superstar. To this point, Brunson has led the Wildcats in points (19.2) and assists (4.6) while shooting 52.7 percent from the floor and 41.4 percent from 3-point range.

And from watching Brunson over any period of time, it becomes clear that stats don’t quite do him justice. During Villanova’s two games in Boston, the point guard whipped crisp passes and hit tough shots, but he also played sturdy defense and gathered the offense in moments of chaos. Even when his passes didn’t lead to assists, they often led to baskets indirectly. If basketball kept hockey assists as a stat, Brunson would likely dominate the category.

Above all, Brunson has a knack for making the right decision at the right time. He shoots when it’s time to shoot, passes when it’s time to pass, slows down the game when the situation calls for it. When he touches the ball, you have the utmost confidence something good will happen for Villanova. As sixth-man Donte Divincenzo said after the Wildcats’ Sweet 16 win over West Virginia, “He could go off and shoot crazy shots, but he doesn’t. He makes his team better.”

Villanova is an old-school college basketball roster in that its players are not superstar freshman, but rather veterans who have paid their dues. Brunson, Booth and Mikal Bridges all played secondary roles on the previous Wildcats championship team before emerging as stars later on. Redshirt freshman Omari Spellman, who broke out during the East Regional with 29 points on 10-of-18 shooting over two games, said Sunday that Brunson sets the tone for him and the team’s other younger players.

Brunson’s numerous accolades, as well as his reputation as an upstanding leader and citizen, ensures that Villanova fans will remember his name for a long time to come, whether or not he returns for his senior season next fall. But if he leads his team to a couple more wins — over Kansas on Saturday and either Loyola Chicago or Michigan on Monday — he will find himself in truly rarefied air.

It’s not easy to find players who have started for two national champions. There’s Shabazz Napier, who like Brunson played a sidekick role as freshman and was the top option several years later. There’s the group that led Florida to back-to-back titles last decade. Before that, you have to go back a long way, to Christian Laettner and company on the early 90s Duke teams. Prior to that? The stalwarts of the John Wooden-era UCLA Bruins. In other words, Brunson could accomplish something that very, very few players ever have.

That feat remains two games away, but it’s well within reach for the most talented and experienced team left in the tournament, one that has won nine games in a row with an average margin of victory of 16.8 points. To get there, Brunson and the Wildcats will have to go through another No. 1 seed with a veteran guard seeking to cement his legend, the Jayhawks and their sharp-shooting leader Devonte’ Graham.

At some point on Saturday, Brunson will sense an offensive possession stagnating, clear out the left side of the court, turn his body away from Graham on the left block and show an audience of millions that the point guard who does it all has the best post game in the building. Then he might very well back his way into history.