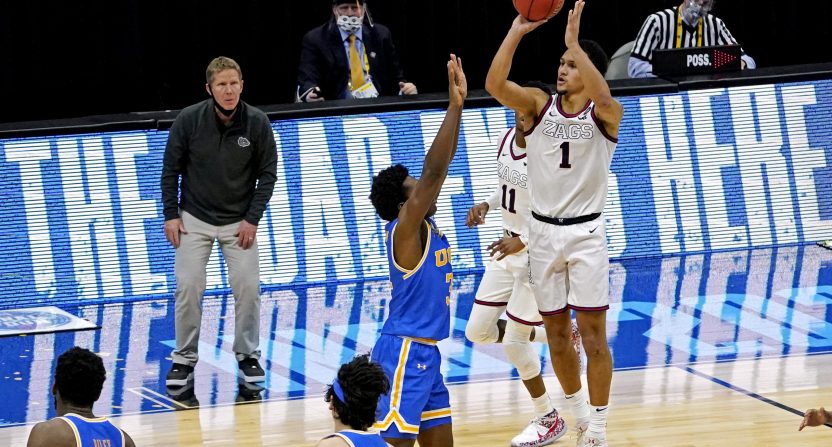 What. A. Game. And it really sucks anybody — especially a 14-point underdog — had to lose.

The NCAA Tournament favorite Gonzaga Bulldogs beat the No. 11 seed UCLA Bruins 83-80 in overtime on Saturday night in the Final Four, with a final sequence that will be shown on college basketball highlights for the next 50 years.

Gonzaga led 90-88 in the final seconds of overtime, when Johnny Juzang — who scored 29 points and was unbelievable throughout the tournament — scored to tie the game with 3.3 seconds left. But Gonzaga star freshman Jalen Suggs — the potential No. 1 overall pick in the 2021 NBA Draft — dribbled down the floor and banked in a long three for the win.

One of the greatest moments in NCAA Tournament history right here:

And here it is with the Spanish call:

Madness at its best pic.twitter.com/iqXP2hEusw

Suggs also put together one of the best sequences you’ll ever see in a basketball game in the final two minutes of regulation:

This Jalen Suggs sequence is one of many examples why he's an elite NBA draft prospect. Absolutely ridiculous on both ends. 🔥🏀💪 pic.twitter.com/Fw6G6vhwSc

It was stunning that UCLA was even hanging in the game by halftime, and they should’ve taken the game to double overtime- if not for a ridiculous shot by Suggs. It was a truly remarkable effort by Mick Cronin’s squad, as their whole tournament run has been. They went from a bubble team — who had lost four straight games before the tournament — being placed in the First Four, to losing in the Final Four on a miracle shot in overtime against the best team in the country.

So, while the the Bruins and their fans are surely heartbroken right now, they should be VERY proud of what the team did. This wasn’t really a loss as much as it was some rough luck on a crazy shot, and they would’ve beaten 99.9% of college basketball teams in history with their performance in this game.

As for Gonzaga, well, they breathe a sigh of relief. And they need to bring their A-game in order to take down a fantastic Baylor team on Monday night in the national championship game. Gonzaga opens as a 4.5-point favorite over Baylor.