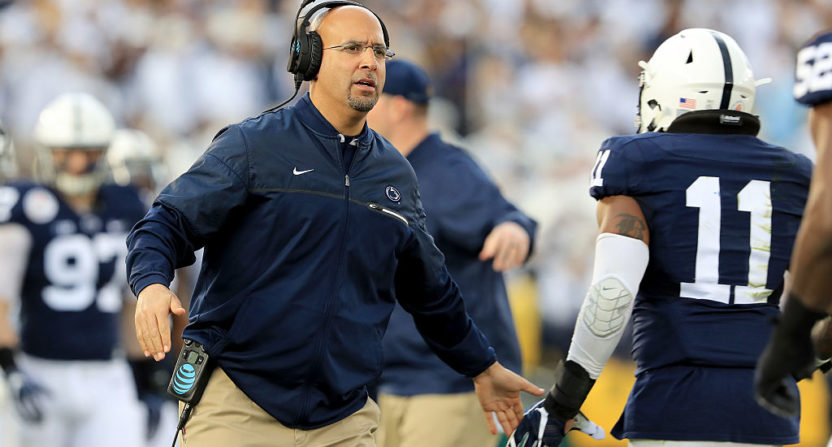 Whether he wants to admit it or not, there is no escaping the importance of Penn State’s 33-14 victory over Pittsburgh on Saturday afternoon in Beaver Stadium for head coach James Franklin. He is too smart of a coach to not understand the value of scoring a double-digit victory against another power conference opponent residing in the same state, when a good number of recruits are standing on the sidelines watching your team take care of business.

Everything Franklin has said since becoming the head coach at Penn State has been part of a master plan, so his comments after the win over Pittsburgh suggesting this was no different from beating Akron were by design and intended to carry a message. The message? At Penn State, the standards are higher.

In his postgame press conference, Franklin downplayed the importance of a win against Pitt by suggesting it was handled just like any other win. But Franklin poured salt on the wounds of the Panthers by suggesting Pitt’s victory over Penn State a year ago meant more to Pitt because the standards in western Pennsylvania are set lower than those at Penn State.

James Franklin: "I know last year beating us for them was like the Super Bowl. This was just like beating Akron for us."

Last year, Penn State and Pitt renewed their in-state rivalry for the first time since 2000, and with the renewal came years of trash talk between the two fan bases. In-state games are pivotal for recruiting battles as well, and Franklin’s mission from Day 1 at Penn State was to dominate the state. The only problem was Franklin lost his first game against Temple on one side of the state and then came up on the losing end in his first game in western Pennsylvania. You can’t dominate the state without winning football games in the state. When Pittsburgh finished off a win against Pitt a year ago, their program and fans had every right to feel joyous and celebrate. The first game in the long-time bitter rivalry went their way on their home field.

But a funny thing happened last year that changed the landscape of the series for 2017. Penn State went on to win the Big Ten and be left on the doorstep of the College Football Playoff. Despite a victory over Clemson, the Panthers could not break through in their division and were left to play in, and lose, the Pinstripe Bowl against Northwestern.

However, don’t try convincing anyone this win for Penn State meant as much as a win over Akron in the season opener did. Penn State was decked out in a white out in the stands, a move traditionally reserved for the toughest of opponents to venture into Beaver Stadium, like Michigan or Ohio State. This game most definitely meant something more to Penn State, especially given how last year’s meeting went down. But Franklin had a different agenda.

Knowing recruits would be listening to his comments, Franklin painted a picture that a win in Week 2 is all a part of a master plan for a successful season, and the bar has already been raised in State College. A year after just missing out on the College Football Playoff and hoisting the Big Ten trophy, Franklin wants everyone to know they are out to simply take care of their business and move on to the next game on their way to what Franklin hopes is the playoff and a championship. As far as Franklin sees it, Pitt is simply hoping to beat Penn State once again. He knows that is not actually true, but he earned the right to play that Super Bowl card on Saturday.

Halfway through the revival of this in-state series, both Pat Narduzzi and Franklin have had the right to chirp after a win at home. Until then, Franklin’s “Super Bowl” comment will have some legs on the recruiting trail, and that’s all a part of Franklin’s plan.