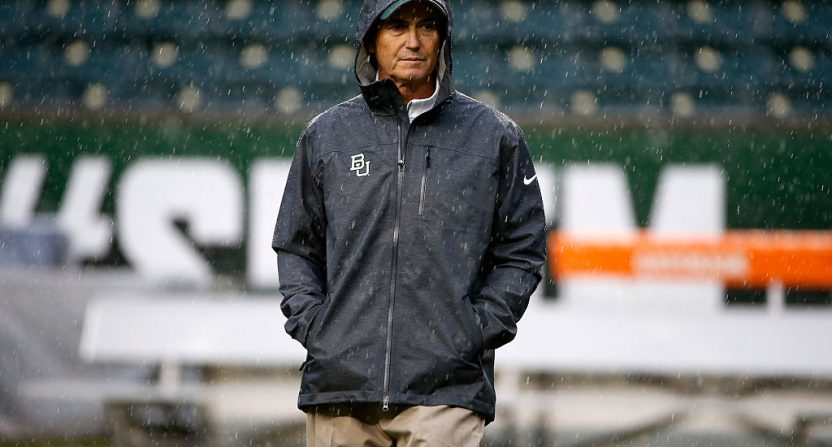 The details of the settlement are confidential, but Hernandez’s and Briles’ attorneys explained the process a bit to ESPN.

Zalkin (Hernandez’s attorney) would not detail what responsibility, if any, each party bore in the resolution, citing mediation confidentiality rules. But Briles’ attorney, Mark Lanier, wrote in an email that Hernandez “dismissed her case against Coach Briles before the settlement. He didn’t pay anything nor did he admit any liability.”

“You kind of weigh the costs and benefits of continuing, and for her, it reached a point where she felt she could resolve the case and have some closure and move forward,” Zalkin said. “It was the right time for her.”

Hernandez was the first person to file a lawsuit against Baylor for its handling of sexual assault cases, in March of 2016. Baylor has been under deep scrutiny for its handling of sexual assault cases, ever since an August 2015 story in Texas Monthly found that the football program had actively worked against sexual assault investigations into players. Shortly after Hernandez filed her lawsuit, Briles was fired and McCaw and Baylor president Ken Starr resigned after the law firm Pepper Hamilton found that the university systematically enabled sexual assault by dismissing victims and protecting the football team.

There are still four active Title IX lawsuits against Baylor, and the school is still under investigation by the Office of Civil Rights at the Department of Education, the Texas Rangers and the NCAA. Baylor never released the full findings from the Pepper Hamilton report—though the school says there was never a full written report—but a federal judge ordered on Monday that Baylor turn documents from the investigation to the 10 plaintiffs in one of the Title IX cases.