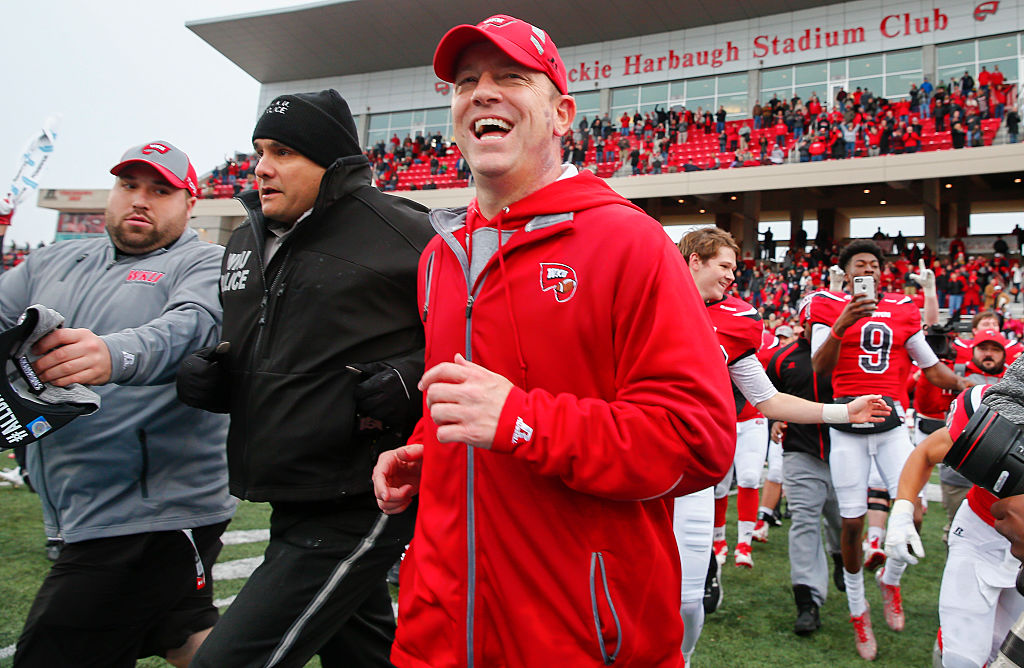 As poorly as Purdue’s football program has been playing in recent years, the vacancy at the head coaching position had been one of the more intriguing ones to watch be filled. The job was linked to potential rumors of varying degrees mentioning Les Miles and P.J. Fleck, but on Monday Purdue found their guy.

Jeff Brohm will leave the Western Kentucky program to take on his first job in a power conference at Purdue.

It’s official. We have our guy. #BoilerUp https://t.co/BbhJiVKxYR

You watch that highlight video shared by Purdue on Twitter and you automatically get a sense they are looking to return to a style of offense that was so kind to them in the past. The images of Drew Brees tell you what Purdue wants to see again, and Jeff Brohm appears to be the perfect coach to deliver that style back to the program.

The way Brohm has run the offense during his highly successful time at Western Kentucky gives Purdue fans a glimpse into the future and should rekindle some warm memories from the past. The Boilermakers are going to improve in the passing game and overall on offense, and could do so almost immediately.

tended to do a good job punching above their weight (e.g., vs LSU in 2015 with 428 yards). Will have to do that as they rebuild

Purdue ranked 20th in the nation in passing offense with 294.9 yards per game, but the efficiency left a lot to be desired with 25 touchdowns and 25 interceptions. For the sake of comparison, keeping in mind stats can never tell the full story given the difference in strength of conference and schedule between a team from the Big Ten and one from Conference USA, Western Kentucky ranked fifth in the nation with an average of 336.8 passing yards per game with 39 touchdowns to just seven interceptions.

At Purdue, Brohm will get to work with sophomore David Blough, who played all 12 games for the Boilermakers this season. Once Brohm begins working with Blough in the spring, the focus will be on cutting down those turnovers. Brohm may not turn Blough into Drew Brees, but he can almost certainly make Blough one of the more improved junior passers in the Big Ten in 2017.

Brohm (30-10 overall as a head coach in three years) was hired by Western Kentucky following the 2012 season to replace Willie Taggart, who had accepted a job offer from South Florida to be the head coach. The hiring of Brohm was an obvious one for the Hilltoppers given the Brohm family legacy in the state of Kentucky. After all, his brother, Brian, was a Louisville legend before the school produced guys like Teddy Bridgewater and Lamar Jackson.

Better yet, Brohm is bringing his brother along with him to be a part of his new coaching staff, according to Bruce Feldman of FOX Sports (via Twitter). Jeff himself dabbled in some quarterbacking at Louisville before making his way around the NFL at various locations like San Diego, Washington, San Francisco, Tampa Bay, Denver, and Cleveland, but his ultimate professional football moment may have come from the short-lived XFL with the Orlando Rage.

There is no questioning Brohm’s toughness, although we should only hope he has dialed down the meathead mentality since his playing days, especially in light of recent coaching changes at Illinois and just this past week at Indiana. There is no suggestion Brohm will follow that trend at Purdue, but that is one classic XFL moment.

What does it take to improve the Purdue football program? On the surface, it should not take too much. Purdue is a program that has almost nowhere to go but up after three and a half seasons under Darrell Hazell with a record of 9-39 between two coaches. There was a time when simply going to a bowl game was near expected annually in West Lafayette with Joe Tiller taking the Boilermakers to a postseason bowl game each season from 1997 through 2004. Five of those seasons coming to an end with Purdue ranked somewhere in the top 25 of the Associated Press poll.

Purdue isn’t exactly asking to have the program flip a switch and all of a sudden start making runs to the Big Ten championship game in nearby Indianapolis to challenge programs like Ohio State, Michigan and Penn State, but taking Purdue to the bottom to the level where it can go to a bowl game somewhere every December (or January!) is not out of line to expect. And Brohm may have what it takes to get them there.

And what is the true testament for how good Brohm is? Even as Western Kentucky prepares for a bowl game, the players are sending their best wishes to their now former coach on Twitter.

Thankful for @JeffBrohm . Seriously the coolest coach I could have ever played for. Will never forget some of the lessons he taught us

It was an honor to be able to play under @JeffBrohm these past 3 years. Wish him nothing but the best at Purdue!

Wishing @JeffBrohm the best, forever thankful for you giving me a second chance. Hope nothing but success to you and your family

Knowing that Purdue was a rebuilding job of sorts, there were certain coaching candidates that made sense and others that did not. Les Miles would have been great in the Big Ten, if purely for the press conferences, but Miles is not the guy you want for a rebuilding project that could take a few years (and Purdue is not the kind of job Miles wants to take on). A coach like Fleck would have breathed new life into the program, without question.

But Purdue should feel confident in its decision to hire Brohm to be their head coach. It may not happen right away, but Purdue will be going bowling soon enough with Brohm in charge.