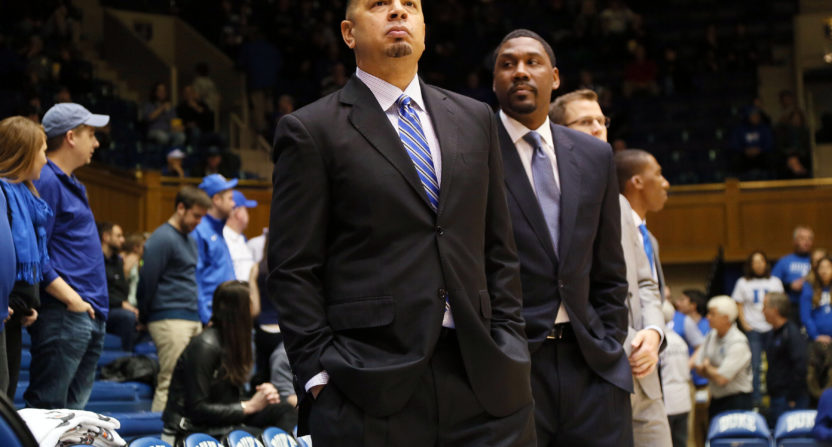 A highly regarded assistant coach who is widely understood to be the coach-in-waiting at his alma mater ends up taking a head coaching job at another school rather than waiting out his boss’ unclear retirement plans.

That’s the situation that Jeff Capel just walked into by taking the head coaching job at the University of Pittsburgh instead of biding his time on Duke’s bench. It’s also the exact scenario that played out at Syracuse last year when longtime assistant and designated head-coach-in-waiting Mike Hopkins left to take over as the head coach at the University of Washington.

For some, the immediate reaction is “why?” Why leave such a cushy gig? Why not serve in heaven a few more years so that you can take over rather than reign in hell, so to speak? However, as Hopkins has already shown and Capel is fully capable (Capel-ble?) of doing is proving that sometimes its better to chart your own path rather than bank your career and reputation on being able to live up to the legend who came before you.

For guys like Hopkins and Capel, standing pat for years makes sense on paper. Both spent four years playing for their respective schools. Their coaching paths diverged but both ended up spending significant amounts of time with their alma mater (22 years for Hopkins, seven for Capel). Both almost certainly would have succeeded their legendary bosses (Jim Boeheim, Mike Krzyzewski) assuming they were still on staff when either actually retires.

But when are either of those guys going to retire?

Both in their 70s, Boeheim and Coach K are, in theory, in the finals seasons of their illustrious careers. But do you hear either of them talking about specific retirement dates? The assumption has always been that you could have the Syracuse head coaching gig when you pry it from Boeheim’s cold, dead hands, and that was before he signed a contract extension last year. Hell, Boeheim’s retirement at the end of the 2018 season was even a condition of the NCAA sanction fallout in 2015, a detail that was conveniently forgotten when Hopkins left and SU panicked over the thought of a rudderless basketball program. Meanwhile, Coach K doesn’t even seem to be considering retirement in spite of his age, even saying earlier this year that he has no timetable for it.

Knowing all of that, how could anyone be expected to stake their own career to ever-shifting, unknown timelines, especially with major college basketball programs calling and considering you?

Not to mention, even if you do stay and replace them, can you ever really live up to the hype left behind? All of the pieces are certainly there for Hopkins and Capel to have succeeded at Syracuse and Duke, respectively, but would it ever have been enough? Any season without an NCAA Tournament berth would be a disaster. Their predecessors always would have done better than they did (or so people would say). One Final Four? Big deal. Boeheim took Syracuse to five and K took Duke to 12!

Not that either man is running away from a challenge, but the opportunity to start fresh and make your own legends is a tough one to pass up. Besides, why try to be the next Coach K at Duke when you can become the first Coach C at Pitt? Isn’t it better to try to become your own legend rather than trying to emulate another one? In Washington, Hopkins is already redefining the Huskies program in his own image. Now, Capel has the chance to win over Panther fans just by returning the program to mediocrity. From there, if he can get the team back into the postseason sooner than later, he’ll reach local god status quickly.

If you believe in the multiverse, there are an infinite number of variations of how this all played out. In some, Capel takes over for Coach K and maintains the program’s recruiting and championship successes. In others, Capel is ousted after three years because Duke becomes simply “very good” instead of elite. It’s possible that, in this universe, both coaches will be out of their current jobs in a few years as well. College basketball is a fickle mistress and all it takes it one or two bad seasons to undo a career.

But who knows, perhaps he and Hopkins will meet in the Final Four one day as they showcase their own programs’ success. Maybe Jim Boeheim’s Syracuse squad and Coach K’s Blue Devils will be the other two teams involved. It certainly seems possible, especially because none of those four coaches seem likely to leave of their own accord anytime soon.