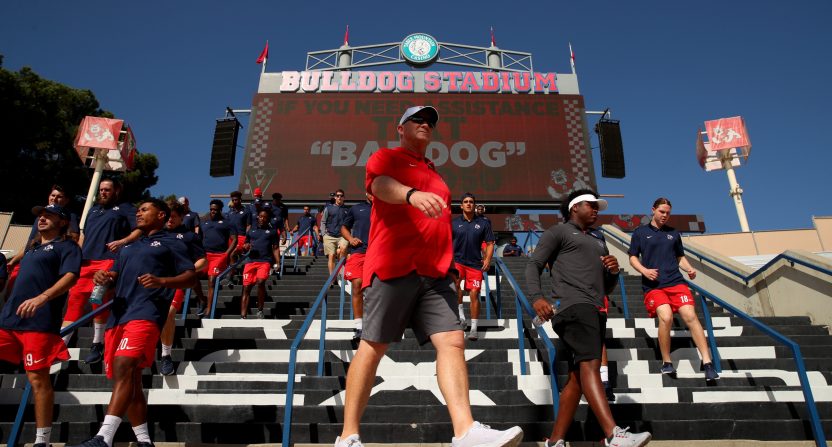 Jeff Tedford built a solid reputation for himself as a head football coach in California. The Fresno State alum spent 11 seasons with the Cal Bears, turning them into a perennial bowl team for a long stretch. He later resurfaced as head coach with the Fresno State Bulldogs, going 10-4 and 12-2 in his first two seasons before dropping to 4-8 in his third season, later resigning due to health reasons.

Now it sounds like Fresno State wants him back and he’s wanting back in as well. Pete Thamel is reporting that Tedford is the leading candidate in the school’s search for a new head coach after Kalen DeBoer left to become the new head coach for Washington.

Sources: Jeff Tedford has emerged as the leading candidate to return as Fresno State’s head coach. A few more steps to take in the process, but Tedford is the target. He was head coach at Fresno from 2017-19 and was an assistant 1992-97.

Along with his previous coaching stint and playing for Fresno, Tedford was also an assistant on the coaching staff between 1992 and 1997.

In between this time as the head coach at Cal and Fresno, Tedford spent time as an assistant with the Tampa Bay Buccaneers, one season as head coach of the CFL’s BC Lions, and was a consultant for the Washington Huskies in 2016.

Tedford has a strong reputation for being able to groom quarterbacks and includes a roster of talented signal-callers to have played for him, including Trent Dilfer, David Carr, Aaron Rodgers, and Joey Harrington. He also recruited Jared Goff to Cal but was fired before he was able to coach him.

We’ll see if Tedford does come back around to take the job he was clearly destined to hold for some time. In the meantime, there were plenty of reactions around college football to the potential return of Jeff Tedford to the head coaching ranks.

In news that should surprise exactly no one https://t.co/Cqjui8Pvp6

Can confirm this. It's possible a deal could be finalized as early as tonight. The school is still conducting final interviews. https://t.co/a5OVUdFbRv