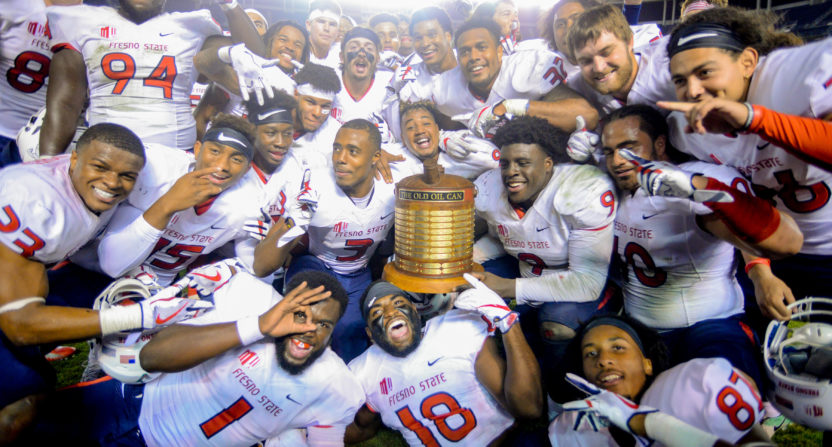 In year two of the Tim DeRuyter regime (2013), the Fresno State Bulldogs hit No. 15 in the AP Poll at one point, before finishing 11-2. Winning 20 games over the course of DeRuyter’s first two seasons looked like a sign of a rising Bulldogs program.

Fresno spent a decade and a half under Pat Hill, with 11 bowl games to show for it. Of the three California State system schools playing at the FBS level (San Jose State and San Diego State being the others), they’d experience the most sustained success. It made sense that the Bulldogs would be able to withstand a coaching and a conference change without much of a step back.

Except the bottom fell out on DeRuyter’s regime soon after. A 6-8 finish in 2014 gave way to 3-9 in 2015. Fresno State started 1-7 in 2016 before the administration had enough. DeRuyter was out with four games to go, replaced by interim coach Eric Kiesau (who went 0-4).

From the second Fresno fired DeRuyter, though, they knew who they wanted to replace him: Former California Golden Bears head coach Jeff Tedford.

Tedford, a Fresno State alum, rescued Cal from the depths of the (then) Pac-10 and turned the Bears into annual conference contenders. Under Tedford, Cal was fun, high-scoring, interesting and full of future NFL talent. But the shine eventually wore off, and the wins slowed. After sputtering to 3-9 in 2012, his tenure was over.

Still, what he did up in Berkeley appealed to Fresno State as the Bulldogs faced a similar uphill battle. Cross-state rival San Diego State built itself into one of the Group of Five’s most consistent programs, supplanting Fresno in the West division. The Mountain West’s other contenders were all several steps ahead as well. Fresno State wanted a quick fix.

While the season’s far from over, the 5-2 (4-0 in MWC play) Bulldogs are already well on their way to getting back to a bowl game — and even greater heights as well. They hold a two-game lead in the West division already, and have the tiebreaker over SDSU. One more win pretty much locks up a division championship and a chance to play for the league title in December.

This sort of turnaround was exactly what the team wanted from the hire, though there may be a price attached to it as well.

Shortly after the move was announced last November, Fresno State fans were skeptical about it being the right call. Tedford’s an older coach and his Cal tenure didn’t necessarily impress. SB Nation’s Bill Connelly was equally dubious, looking at the upside this hire seemed to lack. Given the number of rising young coaches out there, you’d have to think there would be more options once the season ended.

But so far, Tedford’s exceeded those expectations seen from the outside. The team’s still losing to more talented squads like Alabama and Washington. However, they’ve handled some very good Mountain West foes, winning four games by an average margin near 20 points per contest. Impressively, a lot of the uptick in production has come from returning players.

Junior quarterback Marcus McMaryion has already put in close to career-high numbers, and upperclassmen receivers KeeSean Johnson and Da’Mari Scott are well on their way, too. A veteran front seven has been among the top units in the country from a raw statistics perspective. Fresno State’s 18 sacks are just outside the top 20 figures nationwide. They also have a very experienced offensive line out there — one which will lose a lot come next year.

And that’s the one question for whether this is the beginning of Tedford’s rise, or just a blip engineered by simply coaching decent-to-good players better than they were before.

That’s not to say Tedford is doing all of this with upperclassmen, though. The balanced running game of Ronnie Rivers, Jordan Mims and Josh Hokit had just one year of experience between them coming into 2017. Most of the secondary is full of sophomores, and there are plenty of younger guys getting field time as well given the big win margins.

The test for Tedford will be finding a way to get the same production out of those younger players without the senior pieces next year. Can the run game be as effective with an inexperienced line in front of them? Can the secondary be as (potentially) hidden when a senior-laden pass rush isn’t helping out up front anymore? Recruiting can fix these things, but in the MWC, those upgrades are rarely immediate. Tedford, already nearly 56, also isn’t getting younger and who knows where the end of the coaching road may be for him.

But for now, Fresno State can bask in the glow of being back among the conference’s top programs. Despite the dip in wins in DeRuyter’s later years, you could argue they never left the league’s upper echelon from a talent perspective. With a coach like Tedford, the wins are coming today. Come 2018, though, we’ll see if that’s normal once again for the Bulldogs.