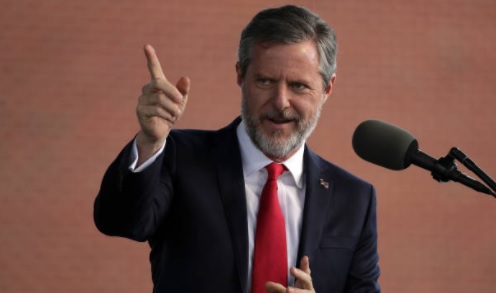 It sure looks as though Liberty University is going to come into the world of FBS football as a newcomer finding it nearly impossible to make friends. But what else would you expect when nobody invited Liberty to the party and nobody apparently wants to open the doors even after they decided to show up anyway?

Liberty president Jerry Falwell Jr. recently took Twitter to suggest his school was being denied membership in Conference USA and the Sun Belt Conference because of the school’s religious mission.

To add a team req super majority of CEOs. It is illegal for public U CEOs to act on religious grounds but have twice!https://t.co/6v2K8s2AiQ

As SB Nation reports, Benson confirmed Liberty offered the Sun Belt a sizable chunk of change but below the $24 million offered to Conference USA and claims the rejection was based on the conference’s geographical footprint more than anything else. The Sun Belt is nestled nicely in the shadows of the SEC, and adding Liberty would have been a reach for a conference trying to stay in its own neck of the woods following the pending departures of Idaho and New Mexico State.

The standard protocol for FCS teams wishing to move up to the FBS typically calls for an invitation from a conference already at the FBS level. However, Liberty has been planning for moving up a classification level for years and received an exemption from the NCAA to join the FBS ranks as a football independent starting in 2018. Liberty was likely given the exemption because, unlike a number of FCS programs in the past, Liberty’s bank account is loaded with funds to build multiple programs. So Liberty feels confident moving up to the FBS, even if a conference has not cooperated with the plans.

Liberty’s biggest hurdle right now appears to be similar to that which BYU deals with today. BYU chose to pursue football independence rather than stick around in the Mountain West Conference during the massive shifts in conference realignment a few years back. At the time, a move to go independent was bold and daring, but was likely seen as a way to attempt to raise the profile of its football program to the point where it can become more of an attractive option for possible conference membership in a power conference like the Big 12 or Pac-12. But the years have gone by and BYU remains an independent with no conferences coming calling. If BYU was going to be in a conference, it feels like it would have happened by now.

So what has kept BYU from joining a conference? To many, the geographical fit isn’t the issue as much as the political fit that doesn’t seem to be available in a conference like the Big 12. Now, for seemingly similar reasons, nobody seems to want to accept Liberty because they don’t feel as though the school would fit in with the established group of conference members. Falwell Jr. may think his school is being excluded because of its religious beliefs, but there are other issues that conferences must consider as well.

Liberty just hired former Baylor executive Ian McCaw to head the athletics department even though he was fired from Baylor in the fallout of a widespread sexual abuse scandal within the football program. Falwell Jr. is outspoken and often seen as a controversial figure. Conferences don’t want representatives from their member schools going out and embarrassing them by association.

So Falwell Jr. may be right in suggesting Liberty is being excluded for reasons other than financial concerns or academic quality and so on. But that doesn’t mean other conferences are wrong to reject Liberty’s overtures. In that sense, it’s just business.