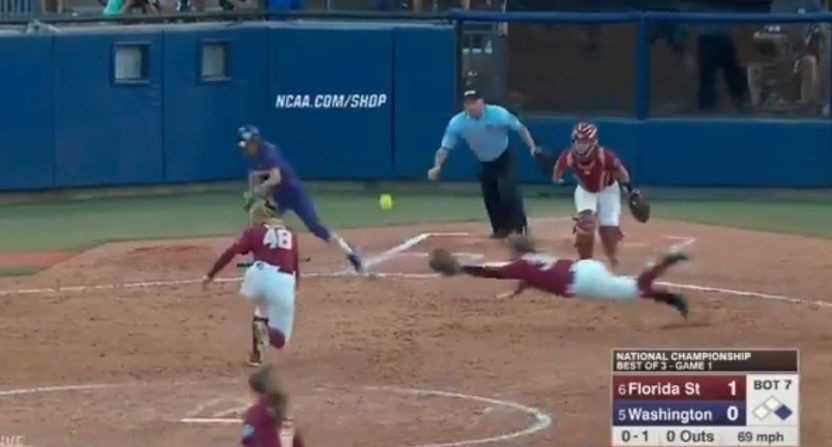 The Florida State Seminoles softball team took game one of the Women’s College World Series against the Washington Huskies Monday, but it was a near-run thing. With the Seminoles up 1-0 in the final inning, the bottom of the seventh, Huskies’ leadoff batter Taryn Atlee singled. Trysten Melhart then tried to bunt Atlee over to second, but popped the bunt up a little bit; it was still short and looked like it would fall for a hit, though, but Jessie Warren came over from third to make a jaw-dropping diving catch, and then threw to first before Atlee could get back to complete the double play.

That’s an amazing play from Warren, and it wound up being crucial to Florida State’s victory. Kelly Burdick singled in the next at-bat, which likely would have scored Atlee if Melhart’s bunt had been successful. Instead, that left the Huskies with just a runner on first, and pitcher Meghan King was able to record the final out to preserve the 1-0 victory. That was part of an overall great performance from both Warren and King, who have been crucial to the Seminoles’ success all year long.

In Warren’s case, Florida State was the only school that offered her a scholarship out of high school back in 2014, and she’s turned into a crucial piece for them and into one of the country’s best players. In addition to her work in the field, she’s excelled with the bat, hitting a home run in all three games against LSU in the super regionals last week. She has 269 career RBIs (tied for ninth in NCAA history) and 81 home runs (10th). She’s hitting .399 on the season with 20 home runs, and has been named the ACC player of the year the last two seasons. And she went two-for-four in this game.

As for King, she’s also been outstanding for the Seminoles. She was a redshirt freshman in their trip to the WCWS in 2016 and was the pitcher of record in both of their losses in the WCWS, and she told media this week that’s helping to drive her this year, as Curt Weiler of The Tallahassee Democrat writes:

“I had kind of a rocky World Series two years ago. I think the emotion just got the best of me,” King said.
“I can build off of it this year.”

She’s definitely done that. King has appeared in all six of the Seminoles’ WCWS games so far, and after Monday night, she’s thrown 27.1 innings without allowing a run. (That extends to 33.1 innings if you count her last six super regional innings against LSU.) She’s only allowed 22 hits and nine walks, and has recorded 28 strikeouts. On Monday night, she allowed five hits over seven innings in a complete-game shutout. And while Florida State is expected to turn to Kylee Hanson in the second game of the best-of-three Tuesday, King would likely start in the third and deciding game Wednesday if required. So both she and Warren could wind up being crucial again.