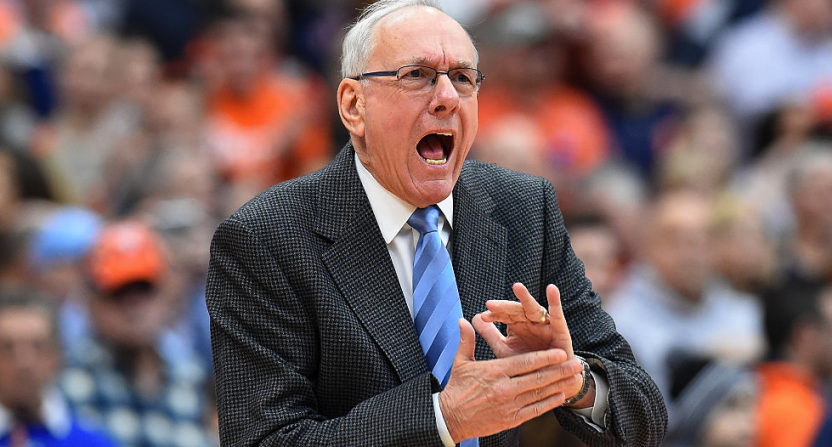 Retirement can be a lonely existence. The “golden years” seems like a polite euphemism at best and a backhanded compliment at worst. You used to be somebody. Now, you’re an aging, unemployed has-been, waiting to die. The last major celebration with your name attached to it involves you lying in a wooden box, waiting to be put six feet under.

When you spend most of your life sculpting a particular skill, profession and modus operandi, no one wants to give that up. Can’t blame anyone for hanging in as long as they can.

As you probably have heard, America’s favorite college basketball curmudgeon isn’t ready for retirement yet. Syracuse’s Jim Boeheim don’t need your rocking chair. The 72-year-old who was originally scheduled to call it quits after 2017-18, not only got a contract extension in March, but said last week that he plans to coach five or six more years.

Jim Boeheim's gonna be around for another five or six more years? #BoeheimForever (h/t Bdscott3) pic.twitter.com/0dlM5izDRf

This, of course, shocks no one. Boeheim has gone from the brink of being Syracuse coach emeritus to Syracuse ad infinitum. His contemporary Steve Fisher just retired at the age of 72, but Mike Krzyzewski, 70, doesn’t appear to be slowing down. Why should Boeheim?

CBS Sports’ Gary Parrish speculates that Boeheim could be waiting for a chance to coach his son Buddy Boeheim at Syracuse.

An update of Jim Boeheim's son, Buddy, from @DonnaDitota1 https://t.co/qktmCe5qNa

On the surface, that seems warm and fuzzy. But Boeheim doesn’t do warm and fuzzy. One thing is clear: Boeheim isn’t going anywhere anytime soon. Former coach-in-waiting Mike Hopkins got tired of waiting and is now at Washington. Maybe someday, he will return to succeed Boeheim. Maybe not. Boeheim said that he fully intended for 2017-18 to be his final season, but Hopkins’ departure changed him mind.

That seems dubious. In fact, you could just imagine how Boeheim’s conversation went with the Syracuse administration.

(Boeheim walks into his office and sees someone sitting in a chair next to his desk.)

Boeheim: “Who are you? What are you doing in here? Security!”

Boeheim: “Oh. What are you doing here?”

Wildhack: “I got a message that you needed to speak with someone regarding an urgent matter.”

Boeheim: “Yes. That’s right. Well, John, as you know, I am Syracuse University. Without me and the basketball program that I coached to its only national championship, this place would be a ghost town. What else would people do in the middle of winter?”

Boeheim: “Let me get to the point. I’m going to coach five or six more years. In fact, Wait. Scratch that. I want to coach Syracuse for the rest of my life. No, wait. Scratch that too. I want to coach Syracuse from beyond the grave. Can you get me in contact with a medium, psychic? How about cryogenics? Is that still a thing? Has it worked out for Walt Disney or Ted Williams?”

Wildhack: “Jim, you can’t be serious.”

Boeheim: “I am. Put it in the contract extension, Joe.”

Boeheim: “Quit stalling! Now get out of here. I’ve got to go. I have a tee time with Carmelo Anthony. Next week, we’ll talk about renaming the Carrier Dome and instead calling it the Boeheim Center.”

That imaginary exchange might be a slight exaggeration, but it highlights that Boeheim is not going to go quietly or meekly. He might have done his best coaching job in 2015-16, getting a team that struggled in the regular season to the Final Four. This past season was a disappointment as his preseason Top 25 club failed to make the NCAA Tournament.

Then Boeheim watched another old guy (Roy Williams) with his own NCAA scandal issues win the national championship. The Syracuse NCAA mess put a permanent stain on Boeheim’s record and he was forced to serve a nine-game suspension in 2015-16. Syracuse Chancellor Kent Syverud said that there was a deadline for Boeheim’s retirement. In retrospect, that now seems like a complete sham.

The man who many thought should be fired might wind up coaching at Syracuse for the rest of his life. Boeheim gets the last laugh. It also shows that even at his advanced age, Boeheim remains one of the most powerful coaches in America.

Retirement? That’s for other people.

After hearing the news about Mike Hopkins, a live look at Jim Boeheim… pic.twitter.com/Fy46vKx7yt

He certainly doesn’t seem like a man who would enjoy life without basketball. During his nine-game suspension, Boeheim passed the time by watching the Food Network and reading crime novels. His identity is wrapped up in Syracuse perhaps more than any other active coach. He played there and has been a part of Syracuse since the 1960s.

Retirement can be unfulfilling for coaches. Many of the great ones fought it until they were pushed out. And that was usually because the on-the-field product was suffering. Boeheim still has coaching clout and seems as sharp as ever.

Next season will be a rebuilding year. Syracuse looks like a middle-of-the-pack team. According to Syracuse.com, this will be Boeheim’s youngest team in a decade – a team with no seniors. Due to transfers, defections and NCAA sanctions, the Orange are down to just eight scholarship players. (Syracuse is limited to just 11 scholarships in 2017-18 due to NCAA sanctions. The limit is normally 13.).

No one has ever questioned Boeheim’s coaching acumen. Somehow, someway, Syracuse just might be better than we all think. That’s what Coach Cantankerous does best. Retirement? Mention that word again and Boeheim will tell you where you can stick that rocking chair.