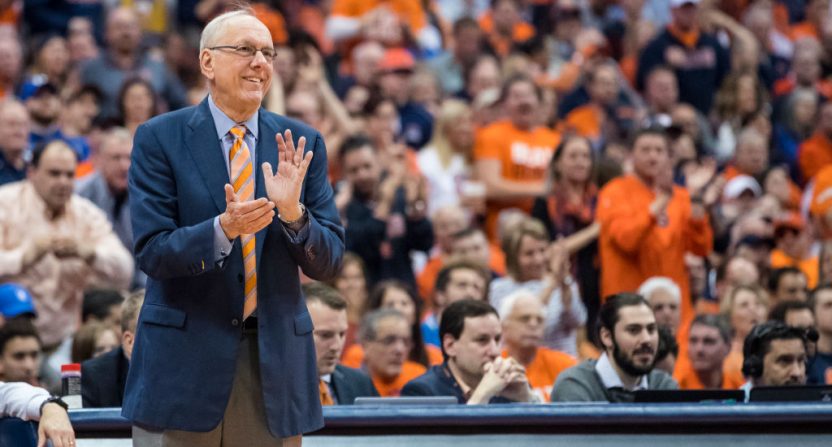 Syracuse basketball head coach Jim Boeheim was set to step down from his position following next season. But with Boeheim’s coach-in-waiting leaving for Washington, the school has decided to stick with Boeheim for now.

The school announced this decision via release Sunday. Based on the release, it shows the school wasn’t probably prepared for Mike Hopkins to head to Seattle. This news also has implications on other coaching gigs around the country.

Here’s how the school reacted to Hopkins’ leaving and Boeheim’s staying.

“Mike accepting the position at Washington has put us in a unique position,” said John Wildhack, Syracuse Director of Athletics. “The circumstances are different now than they were when he was named head-coach-in-waiting.

“After discussing it with Chancellor Syverud, we believe the best decision for the student-athletes currently in the program and those who are committed to attending the University is to extend Coach Boeheim’s contract. Jim has enthusiastically agreed.

“Mike received a great opportunity and we thank him and wish him the best,” said Boeheim. “I’m happy to stay on to help the program and to continue the staff’s devotion to success.”

“The Syracuse basketball program was built on the concept of family and that remains intact with Coach Boeheim agreeing to this contract extension,” said John Wildhack. “Having experienced assistant coaches like Adrian Autry and Gerry McNamara on the staff helps us maintain the elite standing the program has earned.”

This set of events makes one wonder if Boeheim wasn’t ready to leave his position quite yet. Washington is a nice job, but it seems like coaching the Orange would be a better gig (Sorry, Huskies fans). So, was this move because of Hopkins leaving and Boeheim staying or the other way around? It’s a real “chicken and egg” debate.

This also has to have an effect on other jobs around the country. You have to believe some of the big mid-major coaches such as Gregg Marshall and Archie Miller have to be tracking any of these big time decisions. But it does make you wonder if any of them were hoping this position would open up after next season.