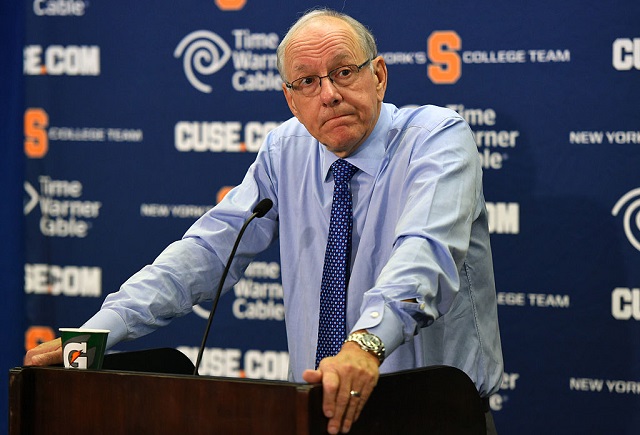 Syracuse head coach Jim Boeheim is set to return from a nine-game suspension that locked him off from his program for a little more than a month. That left a lot of time for a career basketball coach to kill while avoiding going crazy.

So what did Boeheim do during his forced hiatus mandated by the NCAA?

According to Sports Illustrated, Boeheim went on a binge-watching spree that included catching up on Diners, Drive-Ins and Dives and Barefoot Contessa. Oh Jim, we need to get you a Netflix subscription so you can binge-watch House of Cards or Daredevil or Making a Murderer or something. Even Friends. Boeheim did catch the latest in the Rocky saga, Creed, and came away very impressed with it.

The coach took some time to relax and catch up on some reading as well, so he wasn’t just letting his brain rot in front of the TV. Aside from flipping through some magazines at Barnes & Noble (Oh, please somebody tell me you have a photo of this, because I’d love to know which magazines he was flipping through), Boeheim read through some crime novels with a fond appreciation for author Michael Connelly. See Jim? If you like crime novels, then Making a Murderer would have been right up your alley!

What else would you have recommended Boeheim do to kill some time during his month off from coaching Syracuse? He could probably put a good dent in Legend of Zelda: Ocarina of Time. I’m just guessing he would get stuck on the water temple as we all have at one point in our lives. Or maybe he’s a closet Minecraft guy. I hear those Minecraft fans can spend hours in the game just like that. I’m also curious if he happened to catch the latest Star Wars movie. And the holiday season was upon us, so he had plenty of time to get some shopping done. Or maybe he just relaxed and watched all of the classic TV Christmas specials.

Boeheim served a nine-game suspension as a result of a previous eight-year NCAA investigation uncovering a number of violations that occurred under his watch, ranging from players having school work done for them, boosters paying players and players with failed drug tests not being held out of practices. Boeheim was originally sentenced to miss nine conference game, but an appeals process reconstructed the suspension terms and allowed him to miss nine regular season games, rather than nine ACC games.