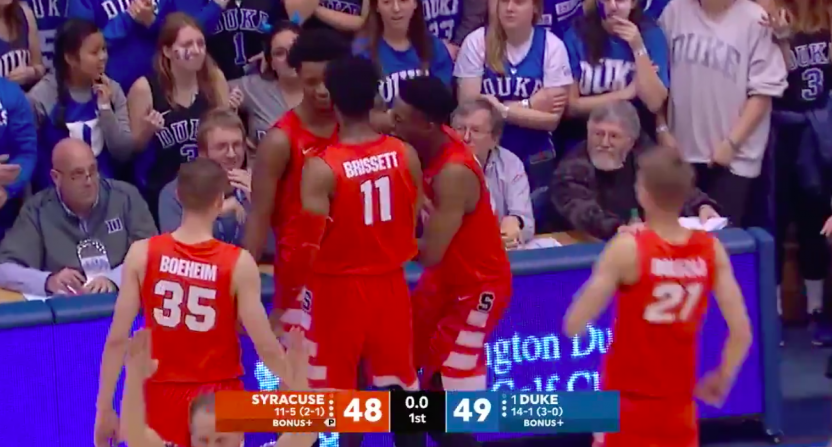 There are many ways to building a college basketball program and many ways to maintain that success. Coach K at Duke is probably the gold standard of the modern era, though you could certainly look at North Carolina, Villanova, Kentucky, and Kansas and come up with some good case studies as well. For the most part, the recipe includes great coaching, solid recruiting, and consistent success in the regular season and postseason.

And then there’s whatever the heck Jim Boeheim has been doing at Syracuse over the last few years.

It’s what’s happened with Syracuse in the last six seasons, though, that is what’s so fascinating now. Basically ever since Syracuse joined the ACC. Because even though he’s become a conference contemporary to the likes of Mike Krzyzewski and Roy Williams, the state of his program has been in the kind of flux that neither of those coaches could begin to comprehend.

The school got off to a dynamite start in its new conference in 2014, starting the season 25-0, before falling off a cliff and losing five of their last seven games before the NCAA Tournament. Once there they were ousted in the Round of 32. The program hit a nadir in 2015 as it served a self-imposed postseason ban following NCAA violations. The team almost certainly would’ve gone to the NIT anyway, but it made some folks feel like this was finally the beginning of the end for the cantankerous coach.

The 2015-2016 season itself didn’t do too much to quell that sensation as Syracuse limped into the NCAA Tournament with a 19–13 record and quite a few people feeling as though they didn’t deserve to be there. What did Boeheim’s squad do with all of that? Well, they marched right through March Madness and made it all the way to the Final Four, resetting the clock on Boeheim’s demise and setting the tone for what was to come.

The following season Syracuse sank again, finishing with a 19-15 record and an NIT berth. That Final Four run was left looking like the fluke so many people thought it was. Once again, the 2017-2018 season didn’t do much to sway that opinion, and the Orange once again fell into the NCAAs with a 20-13 record and a reputation that they were stealing tourney spots from better squads. Naturally, Syracuse then made a run all the way from the First Four to the Sweet Sixteen.

At this point, this has become Syracuse’s reputation. And at this point in the 2018-2019 season, it looks like they’re primed to do it again.

The Orange came into the year with huge expectations thanks to the returning Tyus Battle and the emergence of Oshae Brissett and Elijah Hughes. Unfortunately, the season has mostly been a disappointment so far. SU came into Monday night with an 11-5 record that included losses to Old Dominion, UConn, Oregon, and Georgia Tech. They had only one Quadrant 1 win to their resume (over Ohio State) and had yet to put together any kind of run that was making anyone take notice. They came into Cameron Indoor Stadium as the biggest underdog they’ve been in over 20 years. Duke’s lineup is a murderer’s row of future NBA stars, led by future No. 1 pick Zion Williamson.

There’s still plenty of season left to play, but Jim Boeheim’s squad reminded everyone on Monday that while they might not have the staying power of a Duke or a Kansas, they simply refuse to ever go away. Despite all the NCAA sanctions, scholarship reductions, win reductions, head-coaches-in-waitings who leave, one-and-done’s, and mediocre performances, there is simply never a time when the Orange is dead and buried. And the moment you give up on them is the moment they remind you what a fool you are for doing so.

Of course in some ways, the win is infuriating for the Syracuse faithful. How can this unranked team come to Durham and beat No. 1 Duke (something no one has EVER done) after losing at home to Georgia Tech and Old Dominion? How can you square some of the performances this team has put out there in recent weeks with the one we all saw on Monday? And what happens this weekend if Syracuse goes back to its mediocre ways when the resurgent Pitt Panthers come to the Carrier Dome?

There’s something so maddening about the state of the Syracuse basketball program, no matter which side you’re on. It’s maddening to root for them and not know what you’re going to get, and it’s maddening not to know if your team will beat them handily by 20 or end up as Duke did.

The Syracuse basketball’s final form under Boeheim, assuming he really does hang ’em up in a few years when son Buddy Boeheim graduates, seems to have taken on the essence of what he means in the college basketball world. Boeheim is frustrating but also prone to moments of genius. Stuck in his ways and yet surprisingly modern when he needs to be. He’s prone to long stretches of (perceived) mediocrity but reminds you of his abilities the moment you write him off.

All of that describes Syracuse basketball in the latter 2010s as well. Before Monday, there was talk of another preordained NIT berth. After Monday, Syracuse is 3-1 in the ACC and back on track for a decent NCAA Tournament seed.

Of course, by the time the weekend is over, they might be back in the NIT. Or in the ACC Title discussion. You literally never know with Jim Boeheim and Syracuse. Are they really this good? Are they really just tricking us? You never know what they’re capable of, even when they show you.