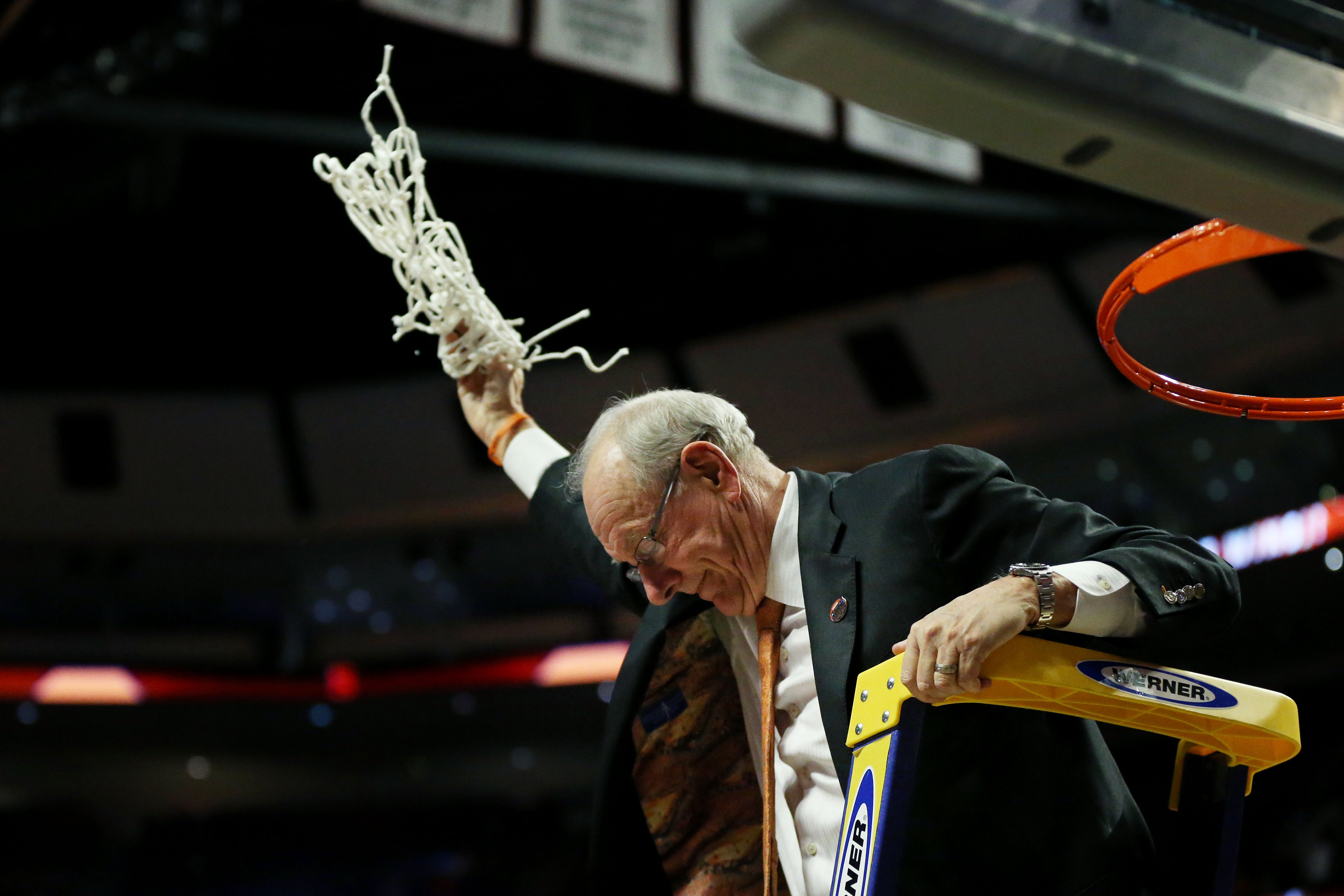 The knock on Jim Boeheim during the first half of his Syracuse head coaching career was that he could string together impressive regular seasons but once the NCAA Tournament started his Orange couldn’t get it done. Between his first season in 1976 and 1986, the Orange routinely won 25-30 games but only made it as far as the Sweet Sixteen three times.

In 1987, Boeheim’s Orangemen broke through and made it to the National Title game before losing to Indiana. A 2-seed that year, it was the first time Syracuse was able to put together regular season and postseason success.

As the years rolled on, Syracuse continued to rack up huge regular seasons but the postseason accolades dried up once more. There were close calls, like an Elite Eight in 1989, but that old mark on Boeheim’s record returned.

Perhaps the 1996 Syracuse squad explains how the second half of Boeheim’s career has helped to change the way he’s perceived. Or maybe it’s the team that taught him what you do in the regular season is far less important than what you do in the postseason. Whatever happened, the John Wallace-led group of overachievers turned what was a rather ho-hum season by Syracuse standards (24-8) into a magical NCAA Tournament run that created a catchphrase and, once again, put Boeheim within a game of a national title.

It wasn’t until 2003 when Boeheim and Syracuse finally put all of the pieces together. While that season’s team was no slouch at 24-5 with Carmelo Anthony at the helm, there were very few people expecting SU to make a big run. After starting the year unranked, the Orangemen just kept winning and the legend of Carmelo was made with a 2003 National Championship.  Finally, all of the pieces fit for Jim Boeheim.

After a low stretch for the program, one could make a case that 2009-2013 was the strongest regular-season span in Syracuse basketball history. The team reached the No. 1 ranking in two separate seasons and twice entered the NCAA Tournament as a 1-seed. Neither of those times did the Orange make good with a trip to the Final Four. It was actually the “rebuilding” season of 2013 that SU finally made it back. Coming into the tournament with a pedestrian (for Syracuse) 24-9 record, they were a 4-seed but, again, not a team expected to do much; yet then they did, taking Michigan to the limits in the Final Four.

But none of those seasons compare to this year.

To say the 2015-16 Syracuse season had been a disappointment would be an understatement. After starting with a Battle 4 Atlantis championship, the season cratered in December and early January with losses to Georgetown, St. John’s, and Clemson. When Boeheim returned from his nine-game suspension, the Orange briefly surged, but the ACC schedule beat them back down to the very edge of the NCAA Tournament bubble. The jury is still out on whether or not the team really deserved to make it in, but they did, and since then Jim Boeheim’s postseason push has returned.

The Syracuse team that has played in the last two weeks doesn’t resemble the team that lost to 8-win St. John’s or lost three times to Pittsburgh. The 2-3 zone is suddenly suffocating whereas it had been porous during much of the regular season. The Orange have dominated in the second half of every game in the NCAAs, when they often fell apart in the second halves during the season. Freshmen Malachi Richardson and Tyler Lydon and junior Tyler Roberson are embracing their roles more consistently. Fifth-year senior Trevor Cooney is ditching his trademark three-pointers for a more physical offensive gameplan.

Syracuse, in the final 13:30 of its last 2 second halves (GONZ and UVA), has allowed SEVEN TOTAL POINTS. SEVEN.

And all of it can be traced back to James Arthur Boeheim.

When you think of him, you probably think of snide press conference remarks or smug courtside looks. Behind all of that, however, is a coach far more obsessed with winning that he lets on. With forty years of experience under his belt, he’s learned the ways to tweak his players and his patented 2-3 zone defense in just the right way when it matters. That he seems to be able to do it best with teams that weren’t able to put it all together during the regular season speaks to his ability to think longterm and have a short memory.

With this fifth Final Four, Boeheim joins the illustrious ranks of college coaches who have done the same. Bob Knight had five, Lute Olson has five, Adolph Rupp got six, and there’s twelve apiece between Coach K and John Wooden. The difference for Boeheim might be that most of those coaches oversaw standout seasons for most, if not all, of those Final Four runs. Success was a season-long accomplishment.

Not for Boeheim, not usually. Boeheim seems to do his best work when he’s got an incomplete team that he can bring together when it matters most. The more teaching and coaching he has to do, the better. The greater the hill to climb, the more likely his team is to reach the top.

Following Syracuse’s comeback win over Virginia, Boeheim said “I’ve never been prouder in all my 40 years of a basketball team than I am of this one.” Believe that, because of all his Final Four squads, this is the one least likely to have gotten there. That kind of return on investment is the kind of thing that drives Boeheim’s internal narrative.

The smarmy curmudgeon who always seems to feel like the world is against him does his best work when the world is actually against him. There’s something quintessentially Jim Boeheim about that.