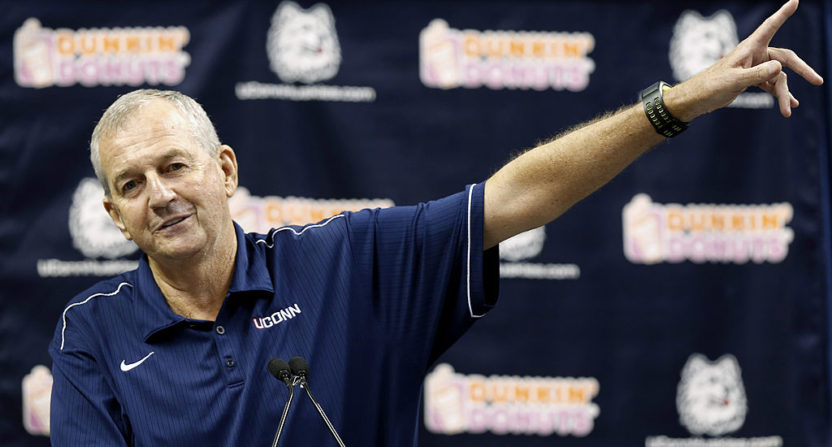 Jim Calhoun retired from an incredible run of coaching success at UConn and Northeastern in 2012 after winning three national titles with the Huskies.

Now a college basketball announcer for ESPN, Calhoun is reportedly considering a return to coaching to help start up the basketball program at the University of St. Joseph in New Hartford, Conn.

From the Hartford Courant:

“I’ve got a couple of other things in the works, one involving basketball which I’m intrigued by,” Calhoun said. “It’s coaching.”

“We will let coaches comments stand on their own,” said Rhona Free, president of St. Joseph’s, in a statement released by a school spokesperson. “While we certainly can’t think of a better person to inaugurate the University of St. Joseph’s first-ever men’s basketball team, right now we have nothing to announce.”

Calhoun won his last national title with UConn in 2011, but he was suspended by the NCAA for three games in his final season “for failing to create an atmosphere of compliance within his program.” The year after Calhoun retired, the Huskies were banned from the NCAA Tournament for an abysmal APR (academic progress rate).

Calhoun joined ESPN in 2014, and he has earned, at best, mixed reviews as a broadcaster.

If Calhoun does leave for St. Joseph, it could be a cool gesture to help a school get its program off the ground. He certainly doesn’t need this job, but he would be a great get for St. Joseph.