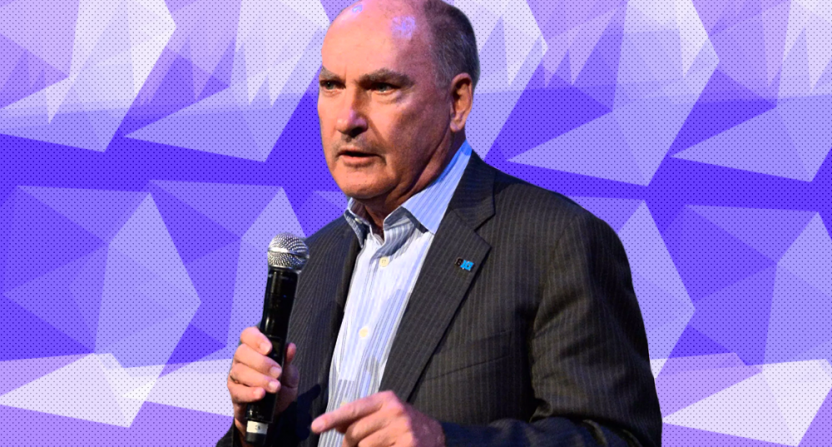 On Monday, the Big Ten officially announced Delany will step away from his position when his current contract expires on June 30, 2020. He will do so at the end of a 30-year run that has seen the Big Ten transform in a variety of ways and be one of the leaders in the growth of college athletics, most notably in football. The Big Ten is already beginning a national search for a new commissioner.

“Jim has had an extraordinary impact on the Big Ten Conference, its member institutions, administrators, students and coaches since 1989,” Big Ten Council of Presidents and Chancellors Chair Person Morton Schapiro, president of Northwestern University, said in a released statement. “He has been a forward-thinking, collaborative and decisive leader in every aspect of conference proceedings.  We thank him for his dedicated service to date and look forward to working with him through the conclusion of his contract.”

Love him or hate him, Delany has been instrumental in making the Big Ten what it is today. Delany took on the role of commissioner for the Big Ten in 1989. Long before conference realignment changes would take the nation by storm the way they did a few years ago, Delany was at the front of the charge early in his career by working out an arrangement to add Penn State to the conference, with Penn State joining the Big Ten in athletics competitions in the early 1990s and as a full-time member with football in 1993. Delany would strike again with conference expansion years later with the invitation extended to Nebraska, thus allowing the Big Ten to add a revenue-generating conference championship game for the first time in 2011. During the height of conference realignment changes, Delany was aggressive in adding a program with history and tradition while also working out a way to generate extra money by selling off the rights for the Big Ten Championship Game.

In more recent years, Delany continued to expand the Big Ten’s reach. In addition to securing bowl partnerships and establishing new connections with games like the Pinstripe Bowl, Delany also welcomed Rutgers and Maryland to the conference. The addition of those two programs, with Rutgers continuing to struggle in multiple areas and Maryland coming in happy to receive extra revenue to dig itself out of debt, continues to have some rolling their eyes, but the Big Ten utilized these new markets to extend the reach of the Big Ten Network. In an industry that is all about the bottom line, Delany struck the right chords where he needed.

Football, and to an extent basketball, will make or break a commissioner’s legacy, but Delany also dabbled in expanding the conference in other ways as well, including ice hockey. For years, despite a handful of Big Ten schools having hockey programs, there was no Big Ten conference. That changed in recent years with hockey-playing schools coming together to form an official Big Ten conference. The Big Ten even added schools like Notre Dame and Arizona State to the Big Ten’s hockey conference. The Big Ten also Johns Hopkins to the lacrosse lineup of Big Ten members. The basic theme here is Delany was interested in solidifying the Big Ten in sports beyond football and basketball, and he sought out some of the best programs there were and added them into the fold any way he could.

The big question for the Big Ten now becomes who will be next to fill Delany’s shoes. The speculation is already well underway, and it will be a position that certainly receives plenty of discussion moving forward. One familiar name immediately linked to the job is Northwestern athletic director Jim Phillips.

And if Northwestern AD Jim Phillips is not at least a finalist for this job, many of us will be shocked. https://t.co/Yf3FEc6WbJ

Whoever takes over the job of Big Ten commissioner will have big shoes to fill. At the same time, the next commissioner will inherit a good spot to be in as the Big Ten continues to thrive financially and is setup for future success and stability. And right out of the gates, the new commissioner may be faced with an important negotiation process on the horizon as the conference’s media rights package is set to expire just a couple years into the new term. The Big Ten has been one of the strongest pulls for TV partners and the revenue spread across deals with ESPN, FOX, and CBS have kept the Big Ten on good standing. But the landscape continues to change with media, and the Big Ten will benefit from having a commissioner in place that understands where the space is traveling. Staying ahead of the curve is essential.

Delany has one more year as the head of the Big Ten. That means one more Big Ten football media day this summer, two more Big Ten basketball tournaments, and plenty of other major events in non-revenue sports.