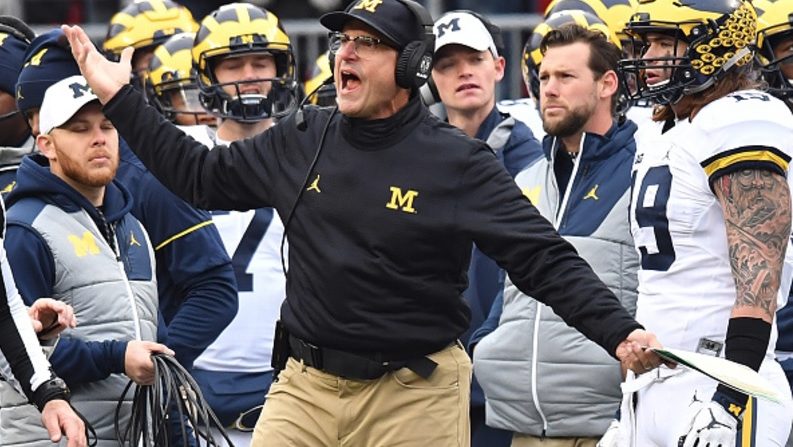 There’s no college football yet. But the narrative season is in full swing. Big Ten Media Days arrived and now, Jim Harbaugh is under pressure and his antics may wear thin. My first reaction was “Wow, that angle is dumb and will subside.” But it’s gaining traction and thus must be addressed.

Jim Harbaugh is a phenomenal football coach. He is doing a great job. How on earth is that not self-evident?

Remember where Michigan was when Harbaugh arrived. The Wolverines were not at rock bottom. (That happened in recent memory under Rich Rodriguez.) But they were awful and unwatchable. The Wolverines were shut out by Notre Dame, lost to Rutgers and Maryland, and lost by multiple touchdowns to Minnesota at home. Wins – 18-13 over Penn State and the M00N game vs. Northwestern – were so ugly that BTN should burn the tapes.

Were it only the on-field issues. The Wolverines were best known for (a) sending a clearly concussed quarterback back into a game and botching the response afterward, (b) trying to cover for a player who was kicked out of the university for sexual misconduct, and (c) having perhaps the worst athletic director in major college athletics, hell-bent on irritating everyone and ruining Michigan’s tradition, the one thing fans had to hold onto during a dark, near decade-long winter. Michigan played a game in freaking matte helmets.

Michigan’s football program was a trash inferno and a national punchline. NFL reporters were outright laughing at the notion Jim Harbaugh would go back there. “Oakland was still in play” when Harbaugh was getting on the plane. College football reporters were suggesting it was time for Michigan to get serious and hire an experienced hand like Greg Schiano.

What happened when Harbaugh arrived? Michigan became a Top 10-15 program overnight. Michigan lost three games in 2016, by two points in regulation and with an injured quarterback. That would be a quarterback most left for dead who Harbaugh developed into a competent starter, a year after taking an Iowa castoff and turning him into an NFL draft pick.

Depending on one’s perspective, Michigan was an inch, a missed pass interference call, or a better quarterback decision away from beating Ohio State in Columbus, winning the B1G East, and being favored to beat Wisconsin and reach the playoff. Harbaugh was doing that in year two, with the ingredients Brady Hoke left him.

Harbaugh’s first two seasons are the best Michigan has been in a very long time. His Wolverines finished in the AP Top 10 for the first time since 2006. His Wolverines compiled two top 12 seasons in a row for the first time since 2003. The best testament to how well Harbaugh has Michigan rolling is that last season was considered a mild disappointment.

Who, exactly, is Harbaugh “wearing out his welcome” with? Would that be his bosses now coping with full football stadiums, a huge Nike/Jordan brand apparel contract, and figuring out how to spend all of that revenue from the Big Ten’s massive new television deals? Jim Harbaugh may be the best investment Michigan has ever made.

Surely, it must be the underlings working under his tyranny? Assistants are just dying to get away from there. And look how he treats the staff. Inventing the “employee of the year” award and giving it to a custodian. Going out of his way to thank the stadium ushers. It’s an absolute nightmare in Schembechler Hall.

Fans. Gotta be the fans who are upset. One can hear their cries. “Please, Jim. Stop making Michigan one of the coolest programs in the country. Stop being so innovative and energetic. Stop trolling SEC coaches; no one wants that. Stop being relentlessly diligent at your job 365 days per year, seven days per week, 24 hours per day, and for the entire 60 minutes during games.”

Michigan fans are thankful Jim Harbaugh went to Michigan, knew what that meant, and turned down money to come back and rebuild it. They are doubly thankful he seems to be enjoying himself while doing it.

Harbaugh did not “wear out his welcome” at Stanford. The Cardinal were desperate to keep him. What has happened to the San Francisco 49ers since he left says everything one needs to know about the job he was doing there. He took that clown show to the Super Bowl. When Harbaugh came back to college, former assistants (the ones who weren’t head coaches) dropped major jobs and offers to come work for him.

Greatness is not winning every year and winning every big game. Things happen. They happen to Alabama. They happen to Ohio State. The trick is to get back there and be in that position year after year. Harbaugh does not have Michigan “there” yet, but they are much closer than almost any other coach would have brought them in two years. Few analysts doubt that’s where they are going, even if 2017 is a down year with the least experienced roster in FBS.

Building a program can take time. Clemson just won the national title. Dabo Swinney lost nine of his first 12 games against Florida State and South Carolina. He lost seven of his first nine against ranked opponents. Dabo brought Clemson to the Orange Bowl in 2011 and gave up 70 POINTS to West Virginia. Where did Jimbo Fisher have Florida State in year two? Losing to Wake Forest (you don’t just walk into BB&T Field) and UVA. Harbaugh is building and fighting at a far quicker pace.

This should be reiterated. Harbaugh is not looking up to James Franklin. He beat Franklin by 39 points last season (could have been worse if Michigan had not let up). Franklin was so desperate in that game he kicked a field goal down 28-0 in the third quarter, to ensure that his team scored points.