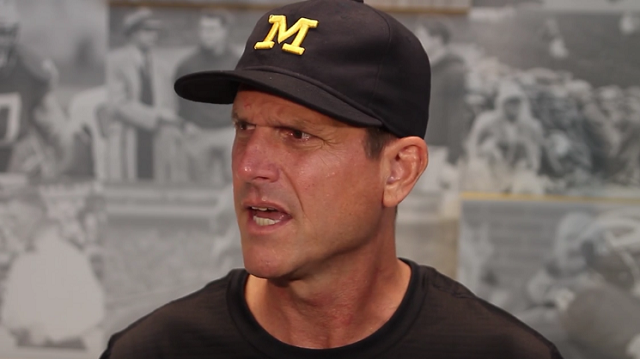 The depth chart named the likes of Manute Bol, Fat Albert, Bernie Sanders, Peter Griffin, Lloyd Christmas, and more. When looking at the variety of names on the chart, it’s pretty dang impressive and funny at the same time. But Coach Harbaugh didn’t think so.

Per MLive.com, Harbaugh was asked about it when he was on Detroit’s 97.1-FM on Thursday, and he wasn’t impressed:

“In our preparation for Colorado we’ve had a hard time working humor into the preparations,” Harbaugh said when asked about it on 97.1-FM in Detroit on Thursday. “They’re a very good football team.”

“I saw the depth chart,” he said. “I was trying to imagine how many people sat around and how many hours they worked on that. We’ve just found, I mean, when it comes to the depth chart — modern technology seems to have made the depth chart an out-dated task by about 20 years. We’ve found studying last week’s film of the opponent is the most accurate way of determining another team’s depth chart.

“There’s so much written about the team that’s on the Internet. For those of us who can or do watch the games — they’re all on television now as well — we just felt like modern technology was the most accurate way of knowing what the opponent’s depth chart is by looking at the previous week’s film. And not relying on another PR director’s assessment of what the depth chart is.”

Despite him not liking the whole fictional depth chart thing, surely he feels better fielding questions about that than ones about picking his nose and eating his boogers.

Making Jim Harbaugh mad might be a bad thing, especially if the game gets out of hand. I have a sneaking suspicion he wouldn’t let the Wolverines take their foot off the gas if things get out of hand.