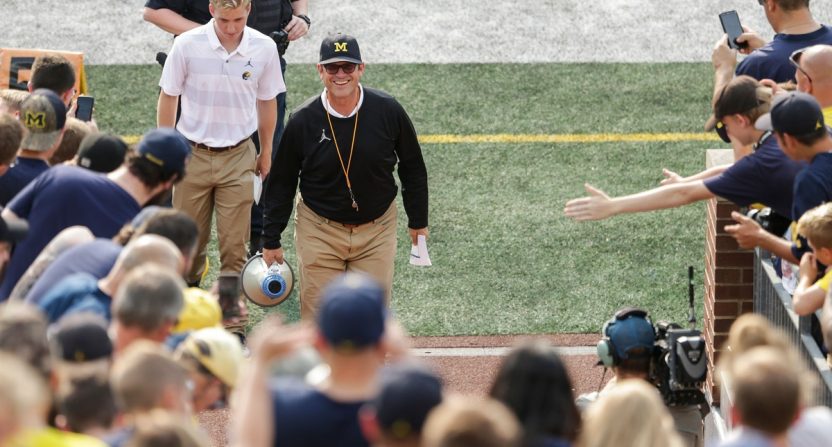 Jim Harbaugh is finally on top of the world, or at least the Big Ten, after his Michigan Wolverines finally defeated the Ohio State Buckeyes for the first time in his seven-year stint. The team now heads to the Big Ten Championship Game with a chance to seal a spot in the College Football Playoff.

All of these wins and appearances are triggering bonuses in Harbaugh’s contract that will make him a lot more money in 2021 than he would have made otherwise. And given how many in the Michigan athletic department were required to take pay cuts last year due to COVID-19 pandemic-related cost-cutting, that seems a bit unbalanced, though to be fair, Harbaugh’s salary was also cut.

Harbaugh appears to agree and announced Monday evening that he will be donating all bonus money earned this season to athletic department employees who had their pay reduced due to COVID-19 issues.

Jim Harbaugh with an announcement this evening on the "Inside Michigan Football" radio show: Any bonus money he earns this season will be redirected to Michigan's athletic department to pay employees who had their pay cut during the COVID-19 pandemic.

To give an idea of how much money that includes, Harbaugh earned $500,000 for winning the Big Ten East on Saturday and he will earn $1 million if Michigan wins the Big Ten Championship Game this weekend. He’ll also earn another $500,000 if the Wolverines make the College Football Playoff. Altogether, he could end up earning as much as $3 million in bonuses this year.

Per ESPN, any athletic department employee who took a voluntary or mandatory pay reduction over the past 18 months and still works for the university is eligible for the opportunity. It remains to be seen exactly what the pool of bonus money will be and how many employees will receive a share.

There are a couple of ways to look at this story. One is that this is a grand gesture by Harbaugh and should be lauded as a class act. The other is to note that it’s an uncomfortable metaphor for the United States, where a millionaire was guaranteed money while lesser paid employees were forced to take meaningful pay cuts, and they will receive some recompense only because the benevolent rich person decided to do so rather than their employer taking care of them.

The dichotomy of those two reactions played out on social media on Monday night.

While other coaches are leaving teams for more money Harbaugh is doing this. Respect coach #GoBlue 〽️ https://t.co/PfY6a5uEve

Wait what?
Athletic departments cut staff and sports amidst COVID, but they’re paying out record breaking salaries to coaches?
And this coach is donating money to pay them what they’re owed?
Excuse me? https://t.co/BriWrnm6XG

I’d like to apologize to Jim Harbaugh for every negative tweet I ever made about him https://t.co/s2UDF2v0Pk

I wanna make sure people know, it wasn’t just the athletic dept that cut wages/compensation during the pandemic. Those who work at their medical facilities took big pay cuts too; and they still haven’t gotten all of it back! https://t.co/e9A16OtHe8

There are plenty of #jimharbaugh haters out there. This should change minds. I aspire to live like this: https://t.co/7zwidJleKS

I'm not understanding how a major university that generates that much revenue can cut the salaries of people making 40K a year out of using the pandemic as an excuse?

All in all, it’s a great move by Harbaugh at a time when his reputation is reaching new heights. If he’s able to pull off a couple more victories this season, he might move into a whole new stratosphere in Michigan lore, on and off the field.