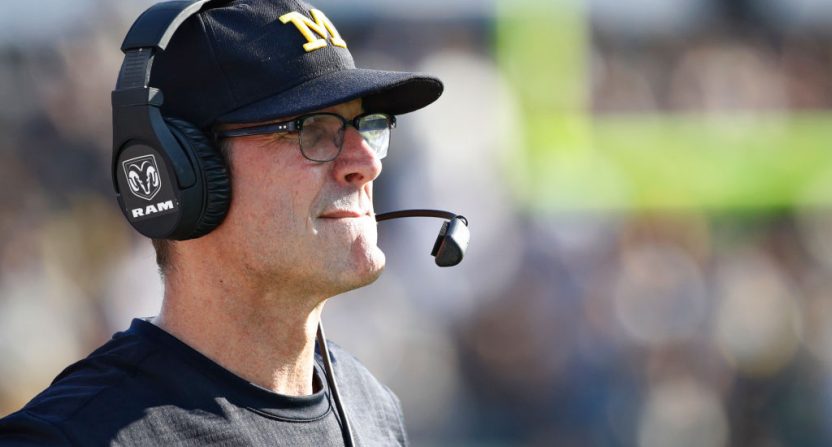 As a writer, I often try to avoid first-person writing. Sure, sometimes it’s necessary. But unless you’re writing on a personal blog, I generally don’t think it’s a good idea and encourage colleagues and writers I edit not to inject him or herself into a piece, even if it’s a column.

But to start here, I’ll break that particular rule because I’m giving a mea culpa. I’m walking back something I previously wrote. A year ago, I said that it was time for Michigan football and Jim Harbaugh to go their separate ways.

As a lifelong fan, I knew Michigan would never fire its favorite son. Yet after six years and the worst football season in recent memory, it sure looked like Harbaugh’s return to Ann Arbor wasn’t working. Maybe it was better for Michigan to find a different head football coach, and maybe Harbaugh would benefit by starting over elsewhere.

That was wrong! And I’ve never been happier to be incorrect. Michigan and Harbaugh decided to stay together and make their partnership work. The benefits of that decision were plainly obvious to all last Saturday when the Wolverines defeated their arch-rival Ohio State for the first time in eight years, doing so in a surprisingly dominant effort.

This was classic Michigan football, bulldozing Ohio State with a crushing running game. The Buckeyes had no answer for the Wolverines’ offensive line and running back Hassan Haskins, yielding 297 rushing yards on the day. In an era when college football has become more wide-open than ever with spread offenses, multiple-receiver sets, dual-threat quarterbacks, run-pass options, and speed in space, Michigan won with a throwback offense that invoked the classic days of the program.

During his previous six years at Michigan, the coach looked out of touch trying to win with an outdated approach and struggling with trying to adopt newer philosophies. His players didn’t buy in, unhappy that their talents weren’t being showcased. Coaches didn’t attack recruiting with enthusiasm unknown to mankind. Exacerbating the issue, Ohio State was ascending as one of the top programs in college football under Urban Meyer. His successor, Ryan Day, was continuing the prosperity.

Attacking this day with Enthusiasm Unknown to Mankind

But Harbaugh kept grinding, coaching his way, and was finally rewarded for it. He worked out a new contract in which he took a pay cut, but had an opportunity to recoup that money with bonuses. He overhauled a coaching staff that had become older and apathetic, bringing in six younger assistants who brought new ideas, approaches, and energy to the team.

The team had the pieces to construct a punishing offensive line for sledgehammer and rocket-fast running backs. And a versatile defense could be built around two relentless pass rushers who could disrupt any opposing scheme they faced. Most importantly, those players believed. They wanted to avenge losses to Wisconsin, Indiana, and Penn State. (OK, they couldn’t quite do that against Michigan State, the lone blemish on Michigan’s record this year.)

It took seven years, far longer than Wolverines fans and college football observers envisioned. But Harbaugh could finally establish the identity he wanted for Michigan football. They finally beat Ohio State, reviving one of sport’s greatest rivalries (and reigniting some dormant fire).

Harbaugh asked if he has thoughts on the trash talking from Ohio State, notably in recent years:

‘Some people were born on third and think they hit a triple.’

Oh my. Harbaugh is back.

If Michigan beats Iowa on Saturday, Harbaugh will win his first Big Ten championship. That should assure a spot in the College Football Playoff. And though fans may not be completely willing to believe, or prefer not to voice such ambitions in fear of jinxing their team, who’s to say the Wolverines can’t create major ripples in the final foursome that determines a national champion?

The College Football Playoff selection committee sure seems to believe, moving Michigan up to No. 2 in the Playoff rankings behind Georgia. Based on what they’ve seen from the Wolverines in the past 12 games, the committee believes Michigan is better than Alabama or Cincinnati right now.

Nearly everything about this 2021 Michigan football team feels like it comes from a different era. The offense looks as if it came from grainy videotape or black-and-white film. The administration showed more patience than we’ve seen throughout college football this year, sticking with a coach into his seventh season rather than cutting ties after two or three seasons when expectations aren’t met.

And as we’ve seen top coaches such as Lincoln Riley and Brian Kelly quickly leave successful, established programs — elite jobs — to go elsewhere for more money than they ever dreamed of, Harbaugh is taking the bonus money he’ll earn from this season’s success and giving it back.

Harbaugh announces he and wife Sarah are giving whatever incentive bonus money he earns this season back to the athletic department to distribute to those in the dept who had to endure pay cuts last year because of Covid — “Inside Michigan Football” radio w @JonJansen77⁩ ⬇️ pic.twitter.com/aMGuUsBZfM

On Monday, he announced on his coach’s show that whatever bonuses he receives for the team’s performance will be given back to the Michigan athletic department to reimburse the employees whose pay was reduced because of COVID-19 cutbacks. That sum could equal up to $3.5 million, depending on how far the Wolverines advance through the rest of the season.

There may be no better display of Harbaugh now being comfortable in his place at Michigan, confident in what he’s achieved. The season isn’t finished yet, of course. And some will say Michigan football needs to sustain this level of performance for years to come. But for all who dislike Harbaugh and his program for the hype they receive, the coach and team have exceeded expectations this year, finally fulfilling the lofty expectations they’ve been carrying for seven years.